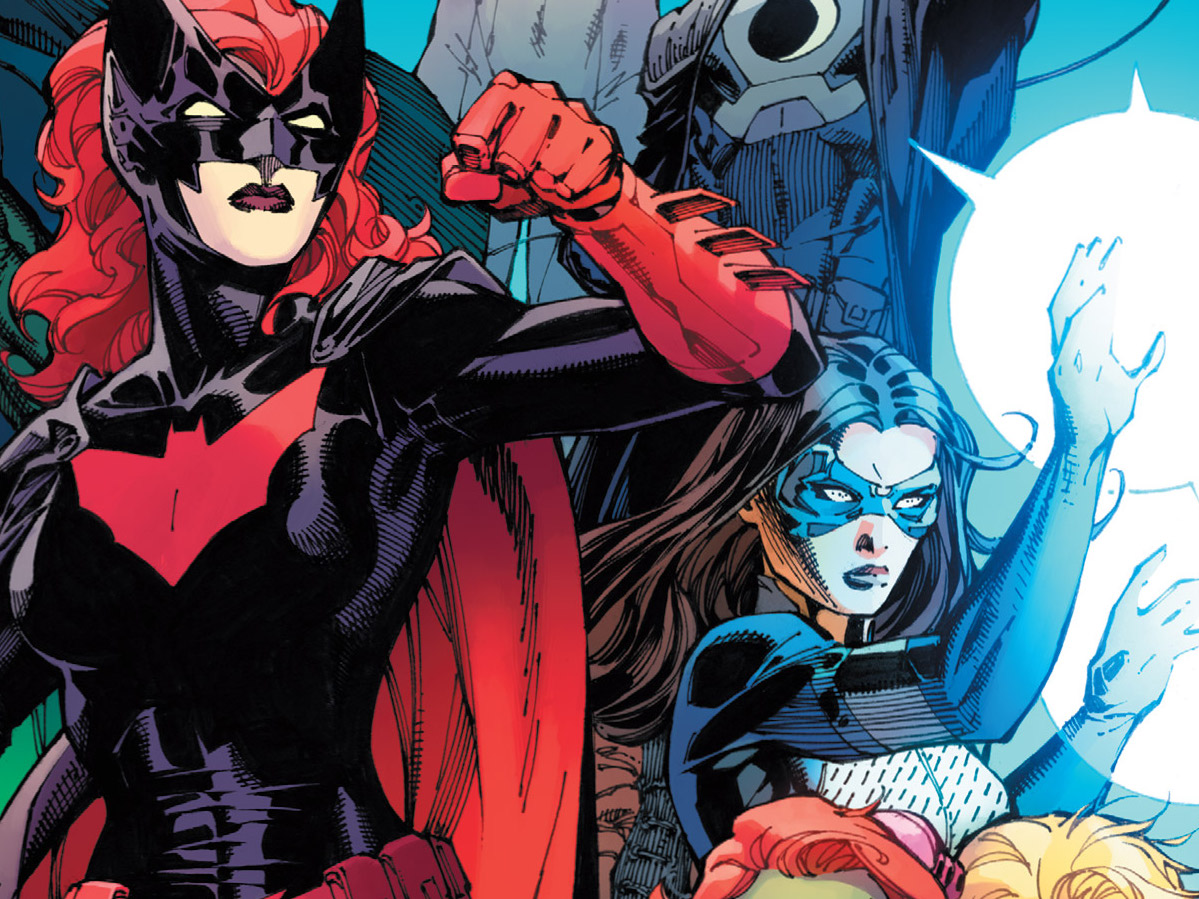 Ray: DC’s latest anthology is one of its most important—a celebration of its strong collection of LGBT characters. Like the recent Festival of Heroes, it’s timed to a month designed to celebrate the underrepresented and actually brings a new player into the DCU. It also features an entirely LGBT creative roster. So how do the stories stack up?

Written by top DC writer James Tynion IV and drawn by indie sensation Trung Le Nguyen, “The Other Side of the Looking Glass” isn’t just a great start—it’s one of the best DC stories I’ve read in a very long time. It focuses on Kate’s complex relationship with her sister Beth, going back to a game they used to play and how Kate never felt in sync with her sister. When Beth is presumed dead, Kate continues to feel out of step with her twin—never feeling like the girl she’s supposed to be. It’s a fascinating look at Kate as not just a lesbian but as at the very least gender-nonconforming, and the storybook-like art is absolutely stunning. It also seems to hold out more hope for Beth/Alice’s sanity than most stories featuring her. It’s a long story, over ten pages, and honestly makes this a must-buy right out of the gate.

“By the Victors,” by Steve Orlando and Stephen Byrne, takes the opposite take. Starring John Constantine, Extrano, and Midnighter, this is a bawdy brawler of a tale that starts with Constantine trying to pick up Extrano in a bar and dovetails into a flashback to the wild time Extrano and Midnighter fought a Nazi vampire. There’s no deep social message here, except, “We’re here, we come in all types, and we’re all ready to kick Nazi ass.” It’s funny and the perfect story to combine some of DC’s rougher-edged LGBT heroes.

“Try the Girl” by Vita Ayala and Skylar Partridge is a quick but satisfying story focusing on Renee Montoya, as the unlucky-in-love Question goes in search of a missing woman. A defense attorney turned progressive City Council candidate, the missing woman has made a lot of enemies and has ties to Renee’s past. While much of this story is a straight-forward Gotham action tale, the ending gives hope that maybe, Renee’s past romantic mistakes with Batwoman among others won’t repeat themselves.

The boldface creative team of Mariko Tamaki and Amy Reeder get to handle probably the most popular LGBT characters at DC—Harley and Ivy. And as you would expect for these two, it’s chaotic, hilarious, and adorable. Harley and Ivy have accidentally created a giant plant monster that is rampaging around the city, at the same time Ivy wants to have a serious relationship conversation. This short story does a great job of showing how Harley’s past relationship issues may make her the more cautious of the two in some ways, but it also shows just how deep their bond goes even if it isn’t conventional. Can we have more of this in canon?

Sam Johns and Klaus Janson tackle the recently out-of-the-closet Alan Scott and his son Obsidian in a follow-up to the recent Infinite Frontier story. This is another longer story, and it focuses on Alan meeting his son’s longtime boyfriend for the first time. But at the core of this story is a powerful tale about growing up gay in different generations. We get a lot of backstory on Alan’s first love, who lost his life in the train crash where Alan found the lantern, and on the secret bar which was one of the only places Alan could truly express himself post-war. It’s great to see a story that pays tribute to LGBT elders.

Danny Lore and Lisa Sterle’s story focuses on DC’s newest LGBT hero—the non-binary Flash of the future, Jess Chambers. This is a pretty light story, focusing on Jess as they get ready for a date with their girlfriend Andy Curry. But they just need to remember three things—and keep on getting sidetracked by a robbery at the Flash Museum and the appearance of a new Mirror Master. I think my favorite thing about this story is how normal it is—it’s really not about LGBT issues, it’s about a day in the life of a non-binary hero and their girlfriend, and that’s progress too.

“Be Gay, Do Crime,” by Sina Grace and the art team of Ro Stein and Ted Brandt, also adds a new LGBT character to the DCU in the chaotic Drummer Boy. This new vigilante is looking to rob a gala to raise money to save businesses in Central City’s “Gayborhood” being forced out by a corrupt landlord, and Pied Piper steps in to stop him and offer a different way. It’s a good look at the frequent conflict between older LGBT people and a new, more politically radical generation.

Maybe the most significant story in this issue introduces the transgender heroine Dreamer to the DCU, fresh off her debut in Supergirl, and is actually written by the character’s actress Nicole Maines and drawn by Rachel Stott. Although it does seem like this still takes place in the Supergirl TV show continuity, I’m hoping it’ll lead to more for the character. The plot, where she tries to stop a League of Shadows attack in time for a date with Brainiac 5, is fun if a little slight and feels like it could be a missing scene from the show.

Finally, it’s Andrew Wheeler and Luciano Vecchio on a story that introduces the first all-LGBT superhero team, JLQ. Obviously there’s some controversy about this property and we won’t get into this here, but this is mostly focusing on Jackson Hyde as he attends his first Pride parade with his date—who happens to be the protege of Extrano. But when a cursed rain starts to fall, courtesy of Eclipso, Aqualad jumps into action—and is joined by a diverse group of LGBT heroes. We get our first look at the roster here, and it has a lot of promise. There’s obviously a good amount of interest in this concept, so DC should go ahead and greenlight it.

Overall, this may be the best anthology, top to bottom, that DC has ever put out. Near-perfect with stories ranging from good to spectacular.