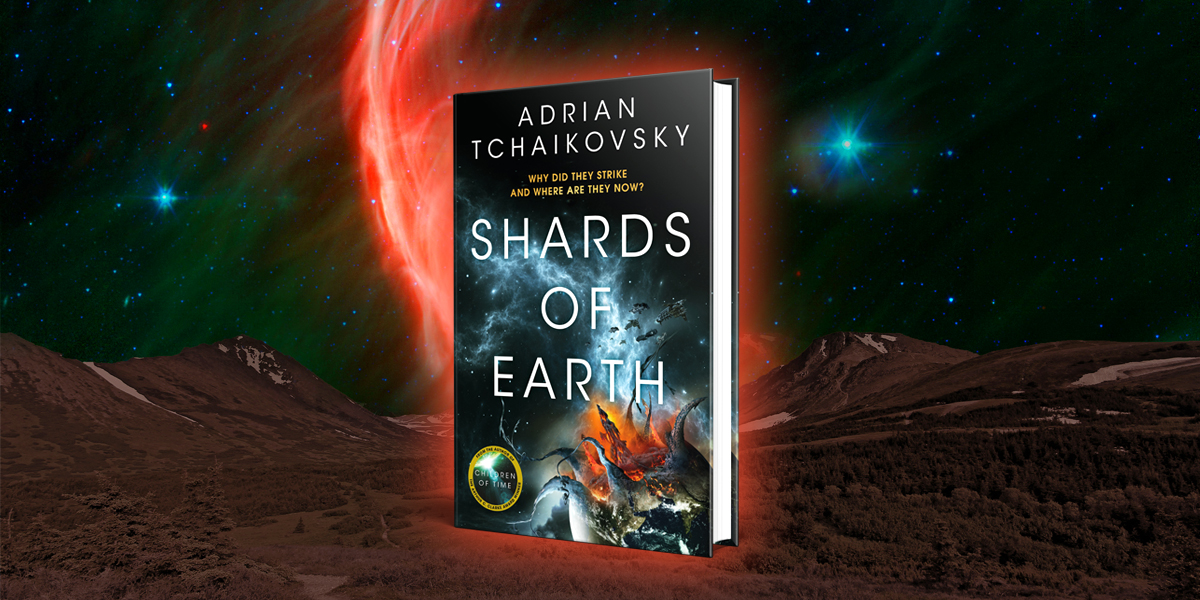 2020 is infamous for many things. It probably won’t go down in history as being the year in which I discovered the work of Adrian Tchaikovsky, but in a year filled with darkness, his novels were pinpricks of light that kept me going. They also make handy house bricks. I’m not sure who the most prolific SFF writer is right now, but Tchaikovsky must be up there. He surely pays his word counter an awful lot of overtime. Of course, anybody who has watched Peter Jackson’s Hobbit films will know that longer doesn’t necessarily make for better. What is most impressive about Tchaikovsky’s work is not that there’s so much of it, but that the quality is so high. He’s back again this month with another sci-fi epic, Shards of Earth.

What Is Shards of Earth?

Shards of Earth is the start of a new science fiction series, a classic space opera featuring a bashed-up ship and a crew of plucky misfits. The novel opens with the scene of a battle. Earth and many other colonized planets have been destroyed. The mysterious “Architects,” in their huge ships of crystal, twist the fabric of planets, rearranging them into new peculiar, artful, constructions. Their reasons for doing so are unfathomable.

The opening prologue shows how humanity brings to bear a new weapon in their fight against the Architects. Idris, a so-called “Intermediary,” can travel through “unspace” to navigate ships at faster than light speeds. Not only that, his mind is capable of communicating with the Architects. Communicating and attacking. When he does so, the Architects leave suddenly, like a human who has realized they’re standing on an anthill.

We pick up the action 123 years later. Idris is still alive, as is Solace, a soldier for the “Parthenon.” Solace was at Idris’s side the day he made contact with the Architects. Solace is alive because she has spent periods of time in suspended animation. Idris is alive because, well, we’re not quite sure. He also hasn’t slept for 123 years. It’s a quirk of being an Intermediary.

The Parthenon are human, but designed—grown in accelerated vats, not dissimilar to the Clones in Star Wars. Now, in peacetime, there are political tensions between the Parthenon and “Hugh,” the human interests board, governing body of the human colonies. Solace has been sent to find Idris to help with a political issue central to the Parthenon and their ongoing low-level rumblings with Hugh. He is currently the pilot on salvage vessel “The Vulture God.”

What follows is a meandering tale of the crew of the Vulture God and the fallout of the discovery that the Architects have returned. Solace finds herself torn between her mission and the undoubted connection she has with Idris, forged on a starship 123 years earlier.

Why Read Shards of Earth?

Shards of Earth is ambitious in scope. It is important to mention that it is not a standalone novel. Things are not tied up by the end. I think knowing this would probably have meant I enjoyed it more than I did. This is a complex novel, with huge amounts of world-building and political machinations. It’s absorbing rather than thrilling, which isn’t to say there aren’t some great fight scenes, because there are and they’re as innovative and surprising as everything else in the novel. I’m tempted to suggest that the entire 500+ pages of Shards of Earth are setting up for what comes next but this is a gross oversimplification. There is an awful lot going on here.

All of the Adrian Tchaikovsky novels I’ve read marry high-concept world-building with scintillating characters. The alien species and inter-planetary politics in this book are fascinating. To an extent, the story takes a back seat during this novel. Indeed, arguably, it’s hard to see exactly what the story is. This is not to say the novel is aimless. It is focused on character progression. The crew of the Vulture God is on a journey—a voyage of discovery in more ways than one. The final destination is unknown and unguessable. During Shards of Earth, we see a group of disparate individuals working together as they learn and process new information.

Shards of Earth progresses through a series of different settings and revelations. Each time the crew of the Vulture God learns some new information, it has to decide what it will do next. Each revelation alters their worldview and their loyalties to one another; much as in real life, alliances and affinities shift as new information comes to light. The book is also brutal; the lives of pretty much all the characters are at risk, and none of Tchaikovsky’s are safe. Every tragedy that befalls the crew profoundly affects how they interact with one another and the rest of the world. It’s very cleverly handled.

The result is an occasionally meandering novel that feels very authentic.

In short, if you like complex world-building and strong characterization, then Shards of Earth is the novel for you.

If you enjoyed this review, check out more of my book reviews.

Don’t take my word for it. This review is part of blog tour, with reviews from all these lovely people. 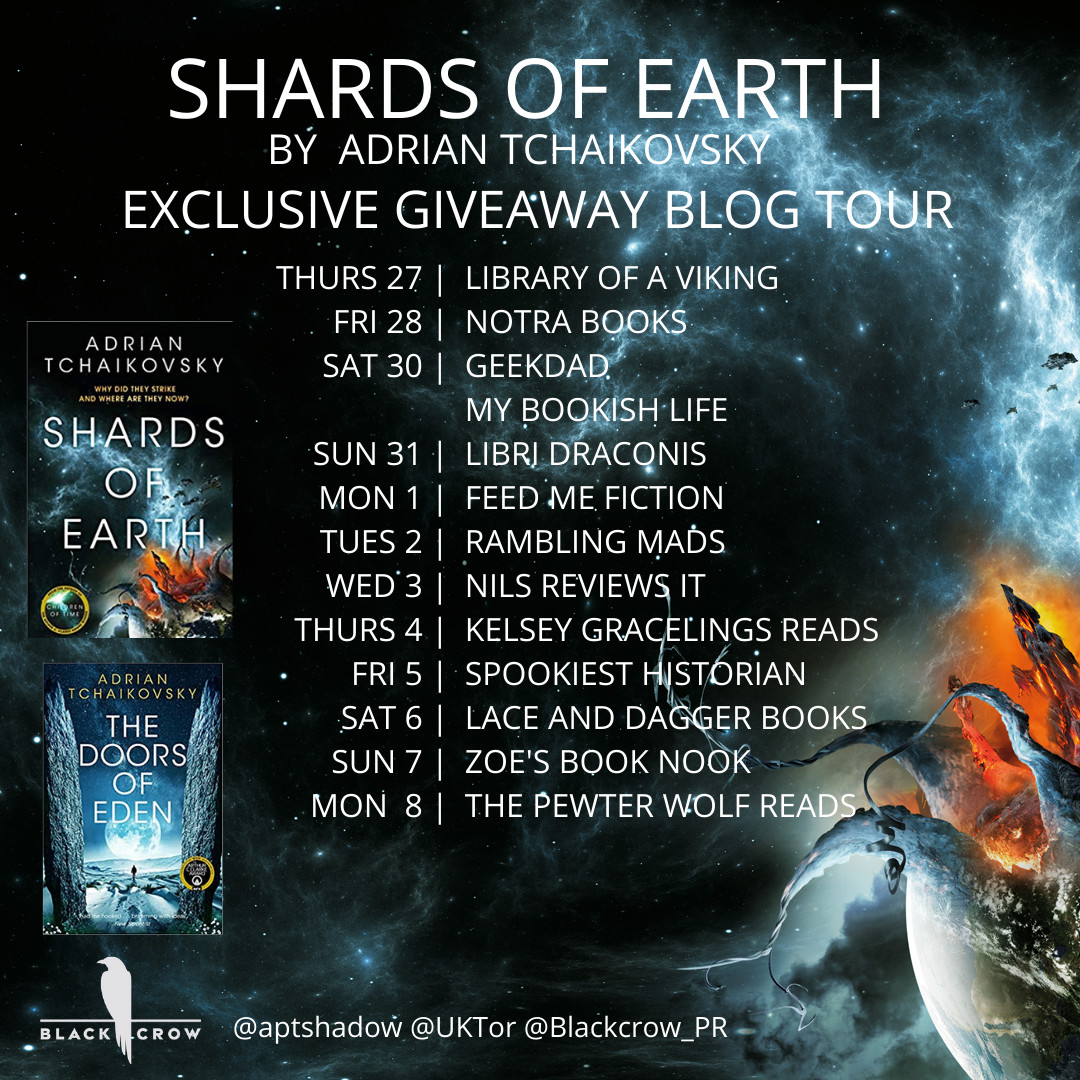 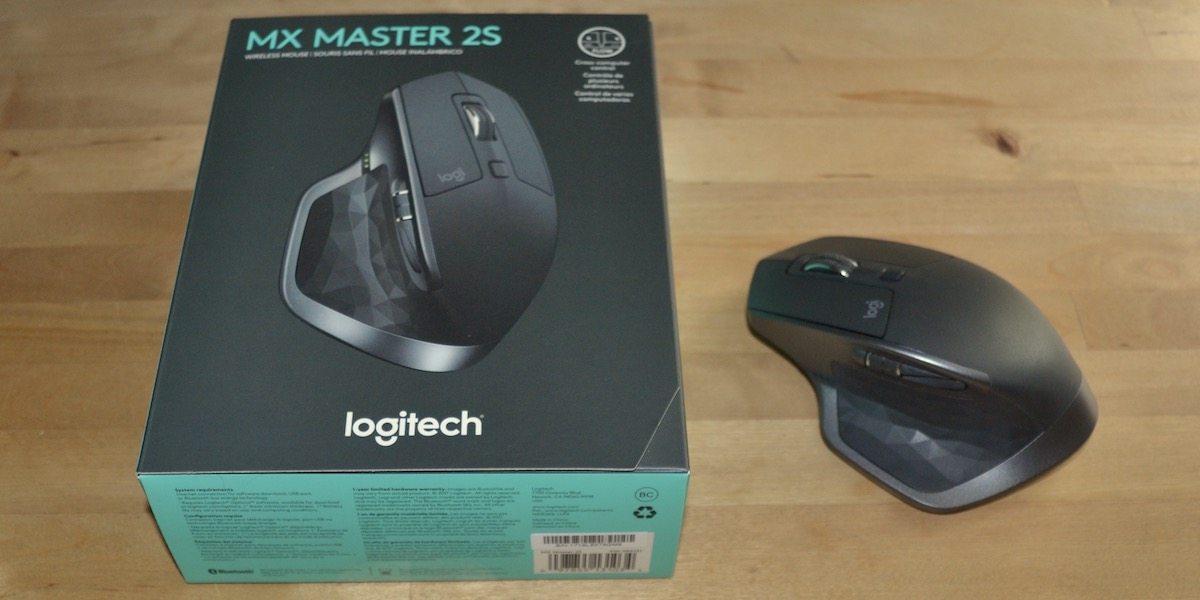 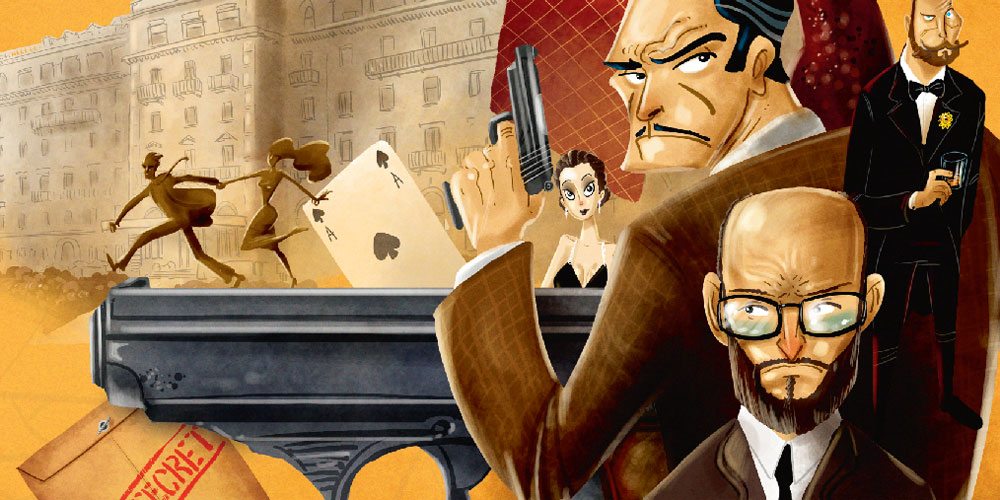