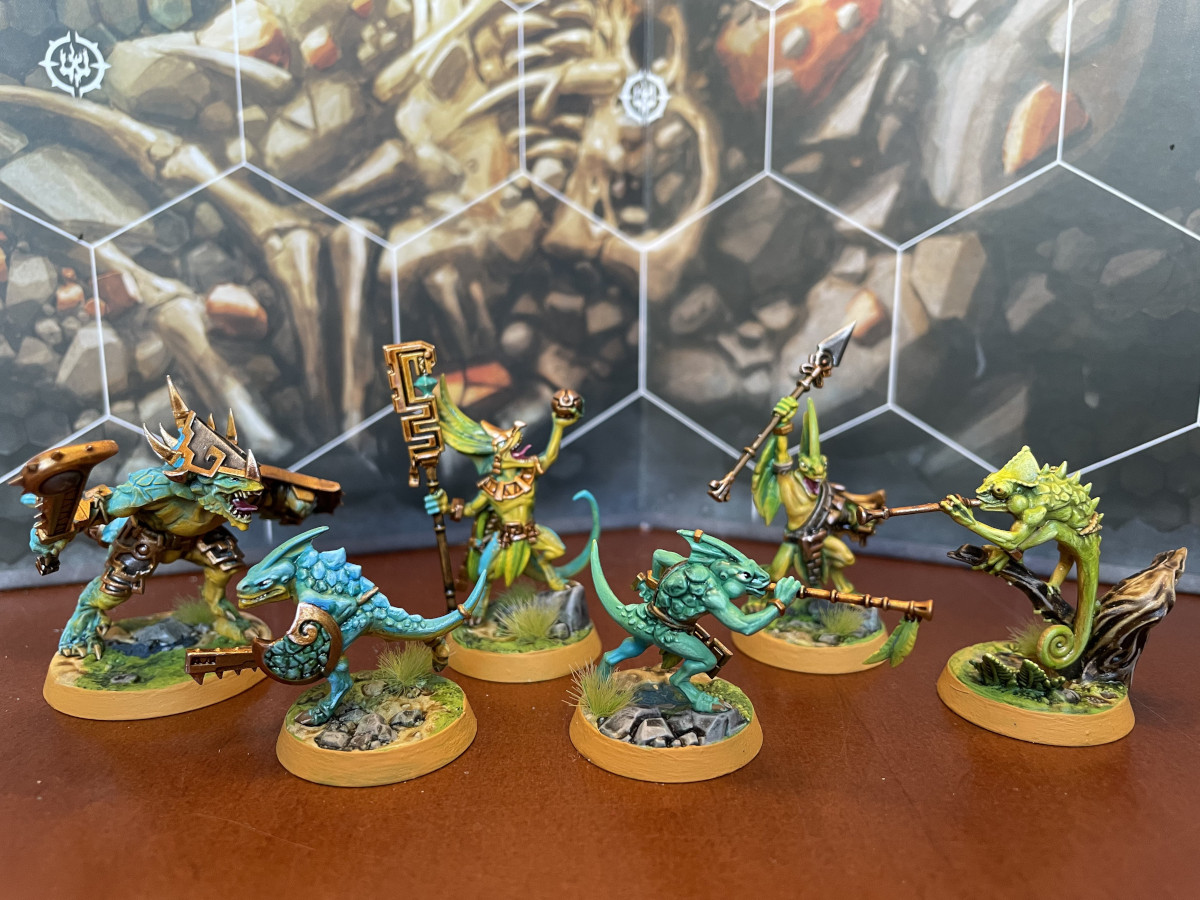 Hello and welcome to what may be the least timely Warhammer Underworlds article ever written. The above image is the new Starblood Stalkers warband painted by painted menagerie. Many thanks to everybody who submitted photos of the warband, as mine are still on the painting table!

My original intention with these articles was to follow the Vanguard meta with each new release of the Warhammer Underworlds: Direchasm meta. I had expected a roughly monthly release schedule, or perhaps even one that was a little further apart. This would give me time to play with the new cards and weigh up their strengths and weakness. For Vanguard Watch episode 2, I’m looking at the release of the Starblood Stalkers. On the day of writing, Games Workshop has released 3 new boxes that will shake up how we play Warhammer Underworlds whether that be for those starting out, playing full championship play, or those of us following the Vanguard meta. But more of those in episode 3.

Who Are the Starblood Stalkers?

Starblood Stalkers are the first 6-member warbands of the Direchasm season. They are also the first Seraphon (Lizardmen to us old-timers) warband to feature in Warhammer Underworlds. To say they were hotly awaited is something of an understatement.

They consist of their leader, Tixi-Kaka, a Saurus, Klaq-Trok, three skinks, and (perhaps) most excitingly, another skink Otapatl. Otapatl is a chameleon who is hard to hit on the battlefield and has the first only “hits on crits” attack in the game, his silent, but deadly, blowpipe.

The warband (mostly) inspires after an activation in which fighters hold 3 or more objectives. All except Klaq-Trok, who needs to successfully attack somebody.

A deep dive into the subtleties of the Stalkers is beyond the remit of this column, but an initial glance suggests they’re going to be a flexible warband. You have fast mobile troops to help grab hold of objectives and the unit that is Klaq-Trok ready to grab a couple of upgrades then wreck face. At first glance, it’s tricky to see exactly what the Chameleon and leader might be useful for. Kixi-Taka’s ability to flip objectives is useful in certain situations, and the variant of his action to do an unstoppable one point of damage is not to be sneezed at.

On the flip side, large numbers of weak fighters are often meat into the grinder in the game, especially with the current prevalence of the primacy meta. Killing stuff has never been so rewarding. In championship format, there are quite a few objectives available in the game that reward standing on objective tokens. There are precious few in the Vanguard meta, and I suspect that the Stalkers are weaker in Vanguard format.

There are three overarching mechanics in the game at the moment. The aforementioned primacy mechanic, the hunger mechanic, and the leftover from season 3, Hunter/Quarry mechanic. What have the new universal cards brought to the Vanguard meta?

A single warband set doesn’t bring with it very many new universal cards; this set only added 27. Whilst there are few extra new cards that invoke the hunger mechanic, in terms of playability, hunger isn’t reliable enough yet be worth investing in. The next release, The Crimson Court (Vampires!), has an in-built hunger mechanism, and I imagine we’ll start seeing the “Hunger Games” begin in earnest once they’re here.

Love it or hate it, primacy is here to stay (at least for now). The Direchasm season is leaning hard into its primacy cards. After initial concerns that it made aggressive warbands too strong, we’re starting to see combinations that can be utilized by weaker, less combat-oriented bands. Primacy is turning into a real cat-and-mouse game, with the token switching backward and forward several times in one round.

I talked about the card Underdog in my previous column. It’s a great card if your fighters are likely to be doing a lot of dying, but with the new cards in play, your opponent may well be trying to dump the primacy token on you, meaning it’s currently a little harder to score reliably than it was.

The upgrade card Proud Runner is huge for mobile warbands with lots of fighters. It comes with a built-in +1 move and allows you to win the primacy token with a simple move of 5 hexes (moves as part of charge count). This enables you to score cards like Surge of Aggression without a successful attack action. As it ties into move actions, you can put it on a hard-hitting mobile fighter like Draknar or Klaq-Trok and then charge. You collect the primacy token after the move action, then take out a fighter with the attack, meaning you would score primacy again, fulfilling the condition that scores another new card, Swelling Pride. Typically, however, Swelling Pride is going to be strong for warbands who love to keep on hitting stuff. You want to keep flattening your enemies in one hit, why not be doubly rewarded for doing so?

The flipside of Swelling Pride is Punctured Pride. Ok, it’s not actually the flipside, they’re different cards. Punctured Pride means that those using card shenanigans to capture the primacy token need to watch out. A meaty orruk fist to a skink face could well see you losing primacy and conceding punctured pride all at the same time. On the plus side, for weaker warbands who might require two shots to take down a 4 or 5 wound fighter, this gives you some recompense for your opponent controlling the primacy token. This is situational, however, and could prove tricky to score.

Haughty Resistance is another card that will see some vanguard play, especially for tougher fighters. If your opponent attacks (and hits) one of your fighters with Haughty resistance attached, you immediately gain the Primacy token. If you already have it, you can discard it and reduce the damage of the attack by one. This type of -1 damage card is hugely popular and there are a number of warband-specific variations. The damage reduction from Haughty Resistance isn’t as reliable, but it does offer up a way to win the Primacy token when it’s not your turn. This is likely to make opponents think twice about attacking the chosen fighter and also put a spanner in their own Primacy shenanigans. It could even help you on your way to scoring Swelling Pide or Wrested Dominance, so well worth considering.

With the game having a number of effects that can only be triggered by your opponent being a hunter (such as the very powerful Beast Trail) cards that make you Hunter are all the rage right now, we didn’t get any new Soultooth weapons in this box. What we did get is a phenomenally powerful card in Savage Visage. It is limited to Range 1 attack actions, but it allows a reroll for EACH upgrade you have that adds the hunter keyword. Pop Savage Visage and Savage Strength on a fighter with a solid range one attack action and they can reroll two dice when they use it. This upgrade itself makes the fighter a hunter. Considering an almost identical card, Awakened Weapon, was restricted when it was available, it’s easy to see that this card is going to get a lot of play.

If your longer-ranged fighters are feeling left out, then there’s always the possibility of using Eagle Eye. Another card to make you a hunter and one that gives range 3 attacks a reroll. All the available hunter upgrades dovetail nicely with 2 new objectives that reward you for playing with the hunter keyword. In the current “Voltron” meta, putting 3 upgrades on a fighter is trivial, scoring you Bristling With Weapons. If you have lots of hunters in your warband, such as the skinks or, in the Vanguard+ meta, Despoilers, upgrades that give the hunter keyword make objectives like The Greater Hunt almost impossible not to score. 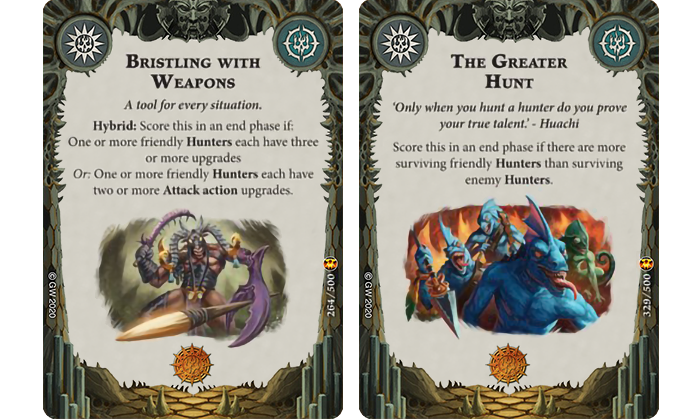 The Best (Most Interesting) of the Rest

Two new objectives that are interesting are Bold Deeds and Clean Kills. Bold Deeds a great balanced aggressive playstyle card. It rewards aggressive play, scoring you glory for doing what want to do anyway, yet still isn’t terribly easy to score. If you draw Bold Deeds early you’re unlikely to score it later in the game, and this card is probably your friend. Clean Kills is a trickier prospect, especially in best-of-3 games. You pretty much have to take out multiple fighters without wounding any others. This is a risky strategy, but one that is possibly worth the 2 glory reward. The interesting thing about this card is that if your opponent knows you have it, they can disrupt it by running one of their fighters into a lethal hex. This might scupper your short-term goal, but anything that encourages your opponent to do damage to themselves is not to be sniffed at.

The Hungering Harpoon plays into the hunger mechanic, which I’m sure I’ll be talking about in my next Vanguard Watch episode. If you have ways of adding additional Hunger tokens, it turns into a terrifying range 3, 3 fury, 2 damage attack. It’s not the best card we’ve ever seen, but it shows that how much fun there is to be had if you can utilize the Direchasm season mechanics.

It’s been the Easter holidays here in the UK, which is partly why this article is a little late. There’s been a deluge of Warhammer Underworlds releases and I’m now very behind. Coming soon will be articles about a brand new starter set, the controversial Essentials pack, and, of course, the even newer kids on the block, the Crimson Court. Plenty to get our teeth into!

Feel free to check out my other Vanguard Watch episodes. 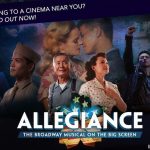 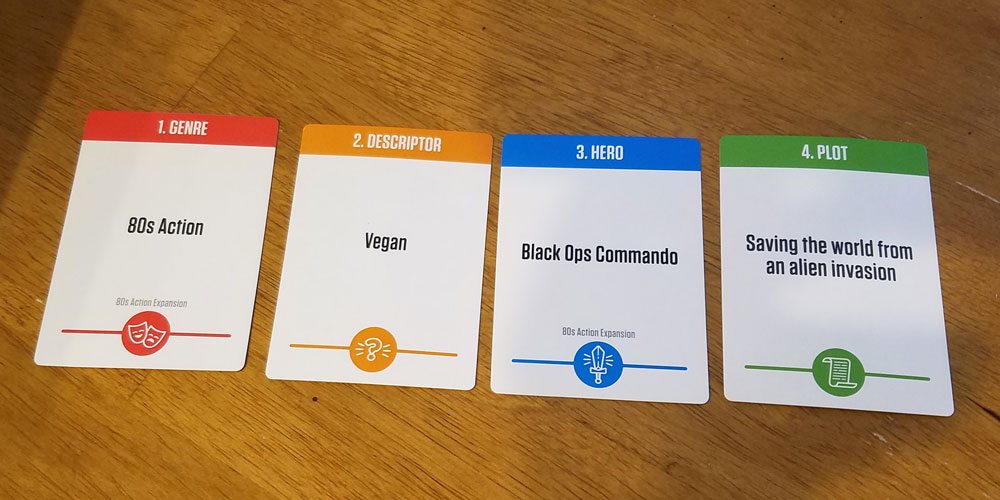