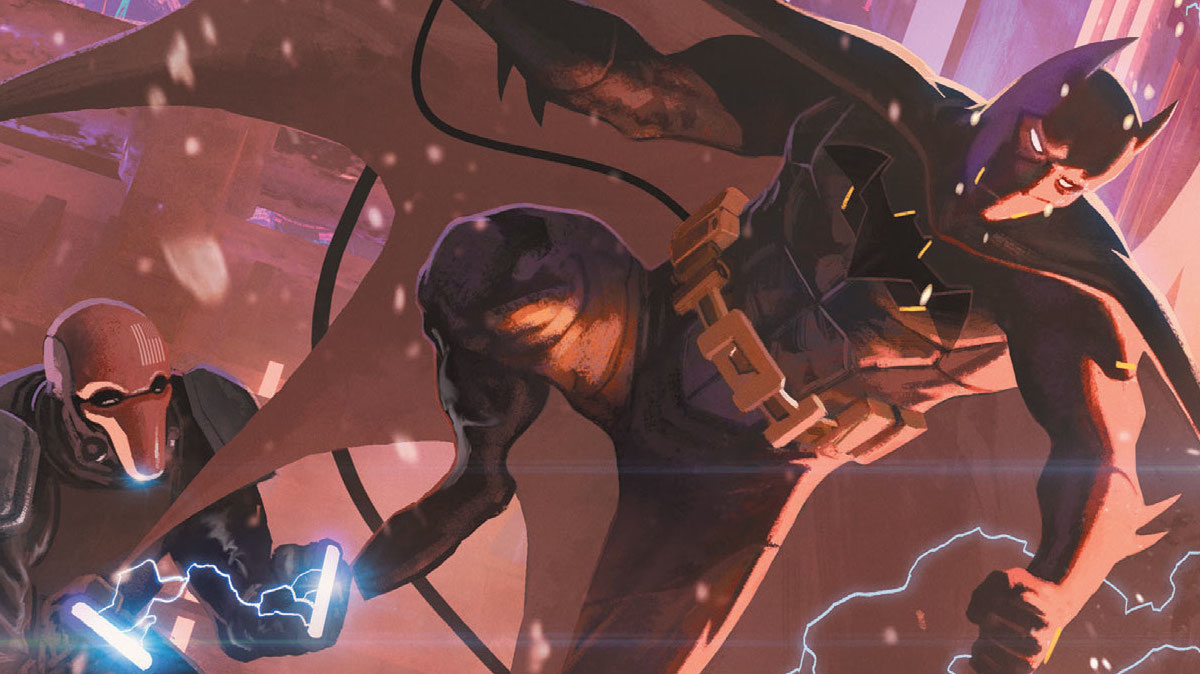 Ray: As we enter the back half of this flagship miniseries, the pacing of the main story continues to puzzle me. There is a lot to like in this gritty tale of a rookie Batman trying to survive in a police-state Gotham, but it feels very leisurely for a four-issue miniseries. The first third of this installment is just Batman fighting Peacekeepers and drones to save the couple who committed a murder of justified vengeance last issue. He eventually gets away, forced to rely on the couple to keep him from bleeding to death, and it then becomes a tense game of trying to get them to face justice without exposing all of them to extralegal execution.

The best parts of this issue have very little to do with Batman and everything to do with the complex dynamics of the Fox family. As Lucius and Tanya clash over their differing attitudes towards what happened to Gotham, Tiff seeks answers from Luke. The problem is, every member of the Fox family is being fleshed out besides the one who actually matters—Jace, who spends all his time behind a mask and is mostly a blank slate still. The ending has a shocking betrayal and a tense cliffhanger, but with only one issue to go it feels like this story is more of a teaser for this new Batman than a true intro.

I think the second story, Outsiders by Brandon Thomas and Sumit Kumar, is the best of the issue. Focusing on Signal, Katana, and a Black Lightning who has been transformed into living electricity, it delivers high-octane action in a breakneck speed. Surprisingly, with only two issues it still manages to feel like a complete story and delivers a thrilling conclusion as Duke wages a race against time and an old enemy to help some refugees out of the city. Most of the Outsiders team from Hill’s run aren’t here, but the relationship between Katana and Lightning is compelling and delivers the most dramatic moment of the issue. Duke’s narration over the entire story is strong, although a little distracting at times, but it shows how he’s grown up into a genuinely inspiring hero. I’m not sure what the long-term plans for the character are in Infinite Frontier, but I hope it builds on what this story set up.

Finally, it’s Paul Jenkins and Jack Herbert on the conclusion of the oddball Arkham Knights story. Casting the insane Astrid Arkham as the commander of a motley crew of semi-reformed Arkham villains, it continues to puzzle me in its choice of “heroes.” Some like Clayface or Croc make sense, but Mr. Zsasz? This issue is pretty straight-forward, with Astrid leading her team into battle against the Magistrate, as the ambitious Peacekeeper-6 attempts to prove himself to his ruthless boss. There are some good action scenes, but overall this story never quite sold me on its lead characters. The highlight is the increasingly unstable Doctor Phosphorus, who provides the issue’s most dramatic segment, as well as the strong art by Herbert. But it doesn’t really tell us anything new about this Gotham. Overall, all three stories in this issue feel like snapshots of a Gotham we still don’t fully understand.