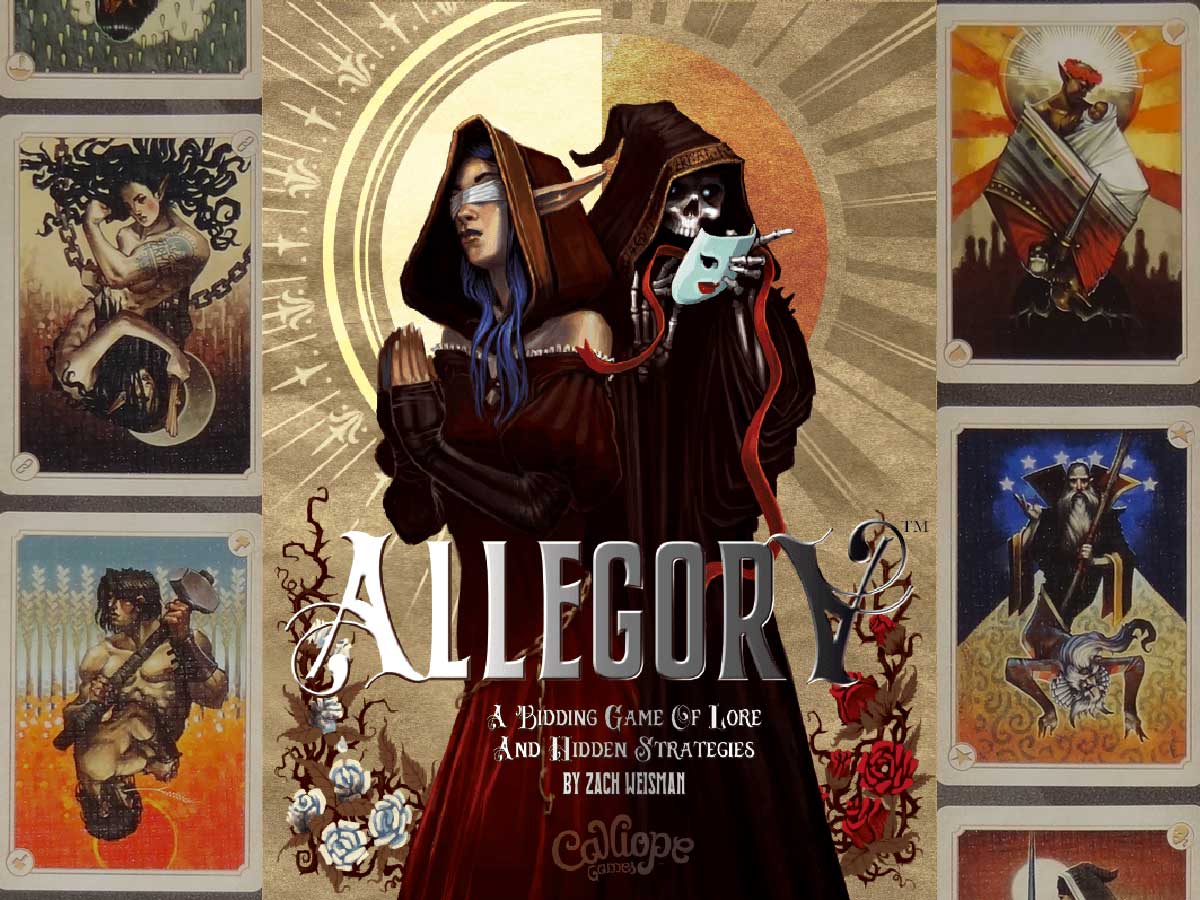 What will you put in your stories of human nature? Will it be about the pitfalls of wealth, or the rewards of hard work? Compete with other authors to write your Allegory.

Allegory is a set-collection game for 2 to 6 players, ages 8 and up, and takes about 30 to 50 minutes to play. It’s currently seeking funding on Kickstarter, with a pledge level of $25 for a copy of the game. Calliope Games is presenting three new titles in this Kickstarter campaign, called the Calliope Game Night Extravaganza, so you can back the project for any number of the games (or get all three for $40). I reviewed Enchanted Plumes when the project launched.

Allegory was designed by Zach Weisman and published by Calliope Games, with illustrations by David Cornish.

Note: My review is based on a prototype copy and plays in Tabletop Simulator, so it is subject to change and may not reflect final component quality.

The illustrations on the cards by David Cornish are excellent. Each card represents a theme, and has an illustration showing two contrasts, like industry and sloth, wealth and poverty, rain and sun, depending on which way you rotate the card. In addition, each card can belong to one of three tales: nature, energy, and spirit. The moral cards have the same set of 9 themes, though without the tale indicators. I like the dual-nature motif throughout the game, which is also carried over into the title logo, where the “A” and the “Y” are mirrored, though that makes me wish the entire name itself were an ambigram instead of just the Y at the end.

The lore chips are yellow discs about the size of poker chips, and the rest markers are larger discs showing a parchment and quill.

How to Play Allegory

You can download a copy of the rulebook here, and you can also try it out on Tabletop Simulator.

The goal of the game is to earn the highest score by putting cards in your tales: you will score points for the lowest of your three tales, as well as some bonuses for sets of themes and including your secret moral in your tales.

If playing with fewer than 4 players, you’ll remove some of the theme and moral cards from the game. Shuffle the theme cards and make a face-up row of cards equal to the number of players (or 3 cards in a 2-player game), setting the deck nearby. This row is called the Inspiration Pool. Shuffle the moral cards and give one to each player; players should look at them but keep them secret from other players. Give each player 15 lore chips and a rest marker. The youngest player will begin.

The game will take place over several rounds. Each player will place cards they collect in a tableau in front of themselves, grouped by tale. The side of the illustration you place face-up does not have any game effect, but you can choose which one you like for your story. Cards are refilled in the Inspiration Pool immediately when they are taken.

Beginning with the start player, each player must either bid a number of lore chips to take a card from the Inspiration Pool or rest: the starting bid can be anything, and subsequent bids must be at least one chip higher (and you must be able to cover the cost of your bid). You do not indicate which card you are bidding for—you just say the number of chips you’re bidding.

If you rest, you place your rest marker in front of you to indicate that you’re done for the round. Then, if desired, you may take the card that has the most lore chips on it (or one that is tied for most), if there are any, putting the card in your tableau and the chips in your supply. (Of course, there won’t be any on the first round.)

Once everyone has rested, the player with the highest bid takes any card of their choice from the Inspiration Pool and refills the pool. Then, they distribute the chips from their bid onto the cards in the pool however they see fit. The player to the left of the winning bidder will begin the bidding for the next round, and everyone takes their rest markers back.

When a player has added the 10th card to their tableau, that triggers the end of the game. Finish the current round until somebody wins the bid, and then the game ends.

You total up the values of the cards in each of the three tales: nature (green), energy (orange), and spirit (blue). You score points equal to the lowest of the three tales. (Note: you cannot win the game unless you have at least one card in each tale, even if you have bonus points.)

For each set of 3 cards in the same theme in your entire tableau, you score 2 bonus points.

For each tale that has at least 1 card of your secret moral, you score 1 bonus point. (Having more than one in a tale does not give you additional bonus points.)

Why You Should Play Allegory

I’ve mentioned before I’m typically quite bad at auction games, though I still enjoy playing them just to see if I can get any better at them. I drop out early and then regret when somebody gets away with a low price for something, or I bid high when I see something I want, only to realize that nobody else was interested anyway. I often have a hard time figuring out what a fair price is for something within a game.

Allegory is an auction game, but the bidding has two really great twists: first, the currency from the winning bid is then distributed on the rest of the market, which means that you’re not just buying something: you’re also potentially giving other players your money. The second is that if you drop out of an auction, you can still get something in return. Both of these together change the dynamics of the bidding, and makes for some interesting possibilities.

Typically, my first instinct if I win a bid is to add most of my chips to the cards with negative values, because that way if somebody drops out of the auction, they could earn some chips but lose points in their tale. However, if you’ve just won a bid, then chances are you’re lower on chips and you may not be able to afford to stay in the next auction as long. Is it worth putting chips on some of the better cards, simply to encourage other players to drop out? Maybe you’ll be able to get away with buying a card for a single chip by the time it comes around to you.

The fact that you only count the lowest of your three tales means that you have to balance out all three stories—plus you need at least one card in each one to win, so you can’t just pile on a lot of bonus points from sets and hidden morals and neglect one tale altogether. But that also means sometimes you can risk taking a negative card for its theme, knowing that it isn’t reducing your score at all because you have other tales that are currently lower.

The scores (at least in my plays so far) have been fairly low numbers overall; I think the highest score I’ve seen is 9. That means a 2-point bonus for set collection is pretty significant, as are the 3 potential bonus points from including your moral in all three tales. However, with 9 different themes in the deck (and 7 copies of each), it can be possible that your own moral doesn’t come up at all during a game. Fortunately, the set collection lets you take other themes if they’re appearing, but you never know ahead of time whether there will be enough of any given theme to get a full set. That can feel a little frustrating, but the luck of the draw can affect your chances. The upside is that if you’re collecting sets of themes that aren’t your own morals, you might unknowingly be interfering with somebody else’s plans to get their own hidden moral.

I really love the artwork in the game, but the game itself still feels pretty abstracted. It may be because I’ve only been able to play on Tabletop Simulator so far or because of the particular people I’ve played with—we haven’t really paid a lot of attention to which side up we place our cards, and we haven’t spent any time actually making up stories about what the cards represent. There isn’t anything in the rulebook about it, but for fans of storytelling, it might be more engaging if the winning player then “reads” their winning collection of tales (or at least the lowest-value one that scored them points).

The set of three games in the Calliope Game Night Extravaganza all have different types of gameplay and themes, but one thing in common: they’re easy to learn and quick to play, with a sprinkling of tough choices to make while you play them. Allegory is the biggest of the three, and I think it’ll be nice to have a casual game that can accommodate 6 players, especially when we can get back to hosting regular game nights. (And until then, you can play it for free on Tabletop Simulator.)

For more information or to make a pledge, visit the Calliope Game Night Extravaganza Kickstarter page! 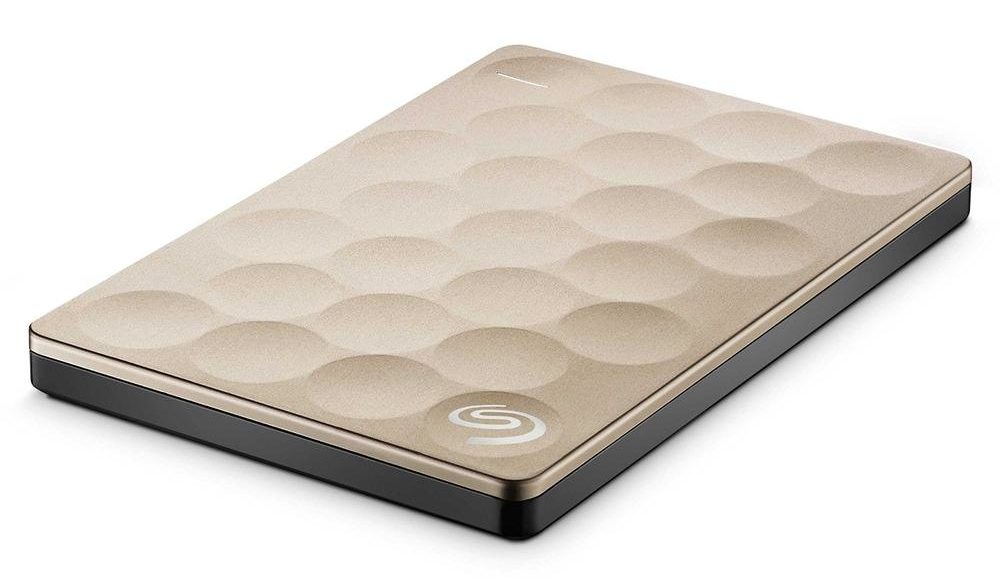 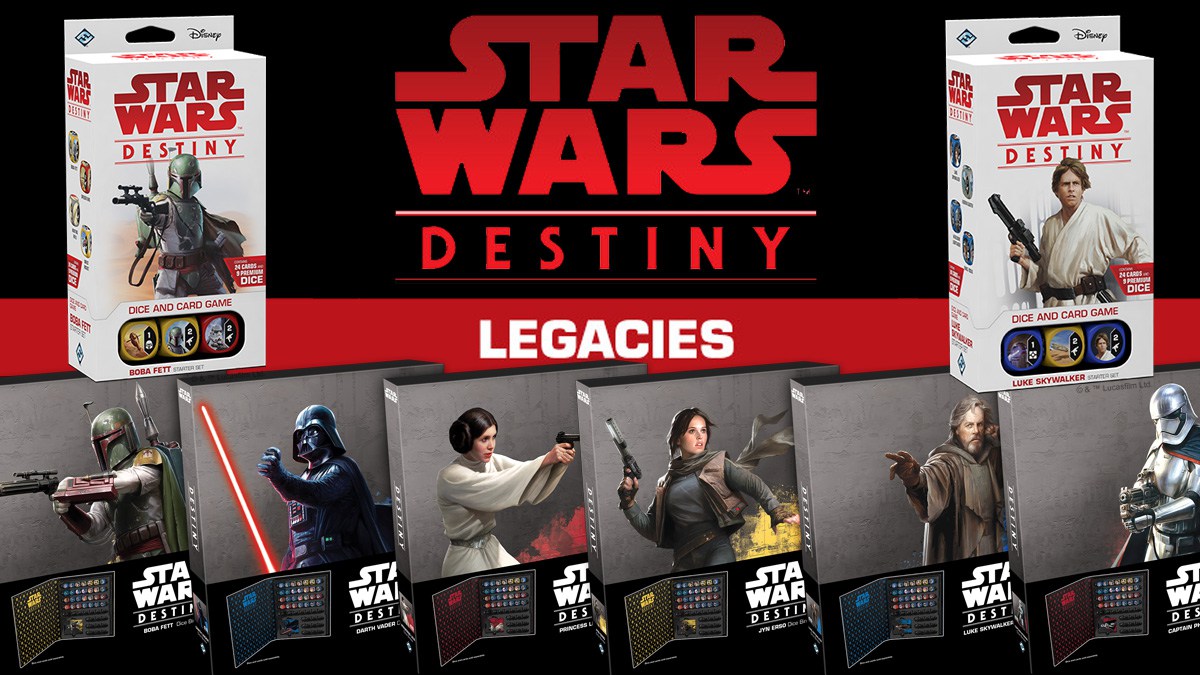