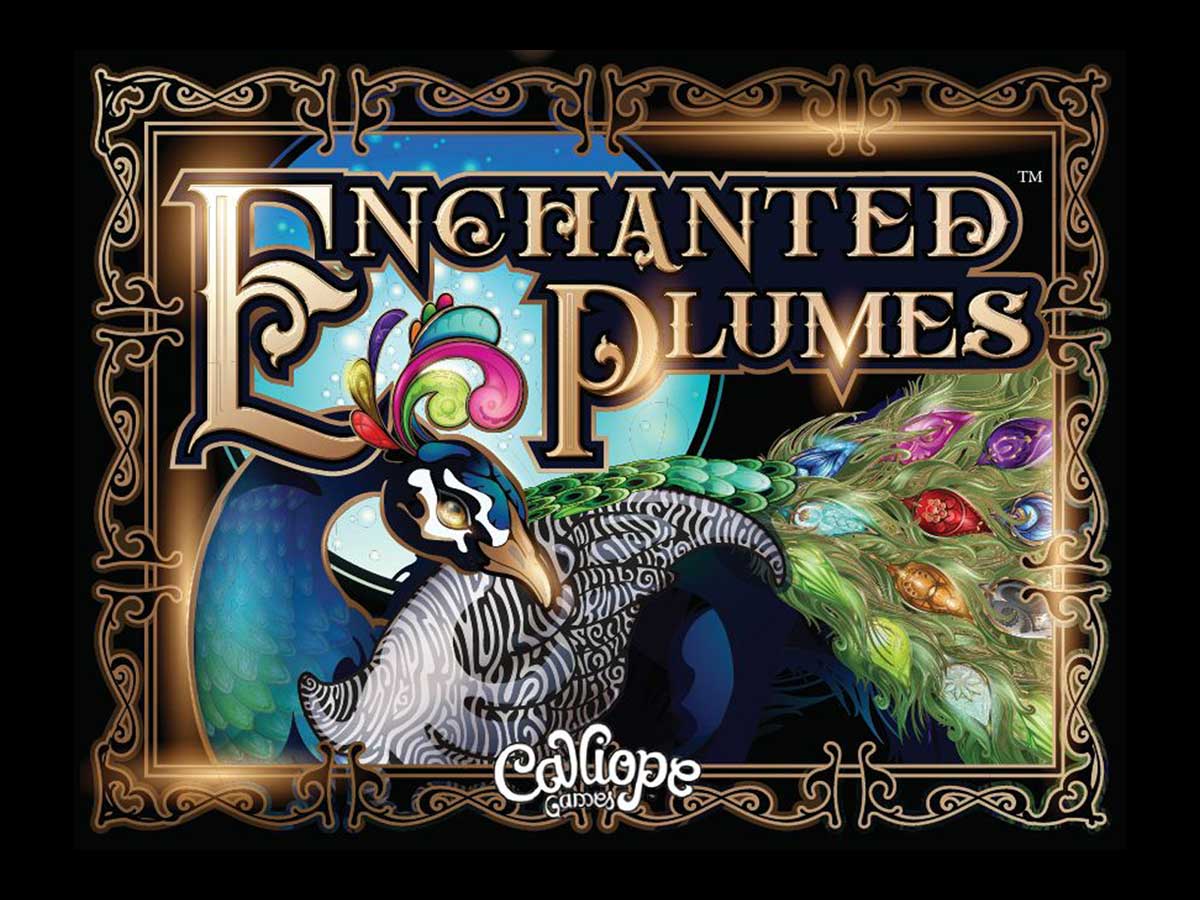 Get ready to strut your stuff! Help the peacocks show off their colorful tail feathers in Enchanted Plumes.

What Is Enchanted Plumes?

Enchanted Plumes is a tableau-building game for 2 to 6 players, ages 8 and up, and takes about 30 minutes to play. It’s currently seeking funding on Kickstarter, with a pledge level of $15 for a copy of the game. The rules are fairly simple and the theme is kid-friendly, but does require some addition and subtraction for scoring. Calliope Games is presenting three new titles in this Kickstarter campaign, called the Calliope Game Night Extravaganza, so you can back the project for any number of the games. I’ll be reviewing Allegory and Mass Transit later on during the campaign as well.

Enchanted Plumes was designed by Brendan Hansen and published by Calliope Games, with illustrations by Echo Chernik.

Enchanted Plumes is a pretty compact game, with just 101 cards in it: 100 Feather cards and 1 Peahen card.

The feathers come in 10 different colors, with values 0 to 9 in each color. They look a bit like jeweled feathers, and each color has a unique filigreed pattern on it. I’m curious how easily they could be distinguished by color blind players because they aren’t simple icons for telling them apart.

The value of the card appears in the top left (and smaller in the bottom right), but those are differentiated by color alone without any patterns. I found the white numbers a little difficult to read at a distance, especially distinguishing the 0, 6, and 9 because of the decorative ornaments on the numbers.

The backs of the cards have a peacock, positioned so that a plume of cards can be positioned behind it to form a full tail, which is a fun effect.

How to Play Enchanted Plumes

You can download a copy of the rulebook here. You can also try it out on Tabletop Simulator.

The goal of the game is to score the most points by creating plumes, peacock tails.

Set the peahen aside and shuffle the feather cards. Depending on the player count, you may leave out some of the higher numbers. Deal each player 9 cards. Each player chooses 6 to keep, shuffling the rest back into the deck. Then, shuffle the peahen along with 7 feathers, and put those cards at the bottom of the deck. Finally, place 5 cards from the deck face-up in the center of the table, forming the train.

On your turn, you play 1 or 2 cards to your plumes, and then replenish your hand.

Plumes are upside-down pyramids: each row has 1 fewer card than the row above it. The top row can have any number of cards, but as soon as you start building the next row, you’ve locked in the size. Each row can only contain colors that are in the row above it. When you place the last card (by itself in the bottom row), you then flip it over to make a finished peacock.

When you replenish your hand, you get two actions, which each must be spent to draw a card from the deck or swap a card from your hand with the train. Your hand limit is 6 cards, and you may not draw more cards if you already have 6 in your hand.

The game ends as soon as somebody draws the peahen card.

Everyone scores their plumes:

The highest score wins, with ties going to the player with the most completed peacocks.

Why You Should Play Enchanted Plumes

Enchanted Plumes is very easy to learn: play some cards to your plumes, and then replenish your hand. The rules for building out the plumes are also pretty simple: you can’t use a color unless it’s already in the previous row. And once you know that the top row counts against you, it’s obvious that you want low numbers across the top, and then high numbers in the rest of the plume. The bigger the plume, the more bonus points you can earn for completing the plume.

Plus, a bigger plume has a better positive-to-negative ratio. If you make a peacock with just three cards, you have 2 negative cards and only 1 positive. A peacock with three rows of cards has 3 negative and 3 positive. Once you get to at least 4 rows, the positive cards outnumber the negative cards. Of course, if you go too big, you also risk being unable to finish the peacock.

Because of the color restrictions, you need at least one color that is present from the top all the way to the bottom—so however many rows you’re making, you need that many cards of the same color (plus all the other cards you’ll need in addition). Collecting those can be quite tricky. For one, there are at most 10 cards of a single color, and that’s at the higher player counts. In a 2-player game, there are only 7 of each color, so making a 5-row peacock is already getting pretty risky. It wouldn’t be too difficult for your opponent to snag a few of your desired color and prevent you from completing your peacock.

There aren’t any rules against using multiple cards of the same color in a single row, but that just makes things harder for you. Of course, if you don’t think you’re going to finish a peacock anyway, you might as well get as many points as you can.

The replenishing rules also throw an interesting wrinkle into the mix, making it a little harder to hoard cards for later. Let’s say you’re working on a plume that has red cards in it, and you see a red card in the train. You could swap for it, but that doesn’t add cards to your hand. And since you must play at least one card each turn, if you’re not ready to start the next row of your peacock yet, you may not want to play a red feather yet anyway. There have been times when a player had to start a new plume, not because they wanted to, but because they didn’t have the right card to add to their current plume. Starting new plumes that you can’t finish just subtracts from your score until you start that second row.

Figuring out which cards to use for the top row can be a dilemma, too. Obviously 0s and 1s are great. But what about 3? Is that too much of a penalty? Should you hold out and hope you can get a lower number? Or will waiting just mean that the opportunity to use that color passes you by?

The theme is a bit loose—obviously, peacock tails don’t grow from the outside down to the peacock—but it does make for some fun visuals as peacocks are completed, and it makes sense that bigger tails are worth more points than smaller ones. I will note that you want to make sure everyone has plenty of room, because even though this is a small box game, it’s a big table hog when you play!

Overall, Enchanted Plumes is a nifty mix of set collection, press-your-luck, and tableau-building. You know what you want, but managing your hand to get the right cards can be difficult. It’s a light game that fits well in the Calliope Games lineup, which are all designed to get you playing the game quickly without a lot of rules overhead.

For more information or to make a pledge, visit the Calliope Game Night Extravaganza Kickstarter page! 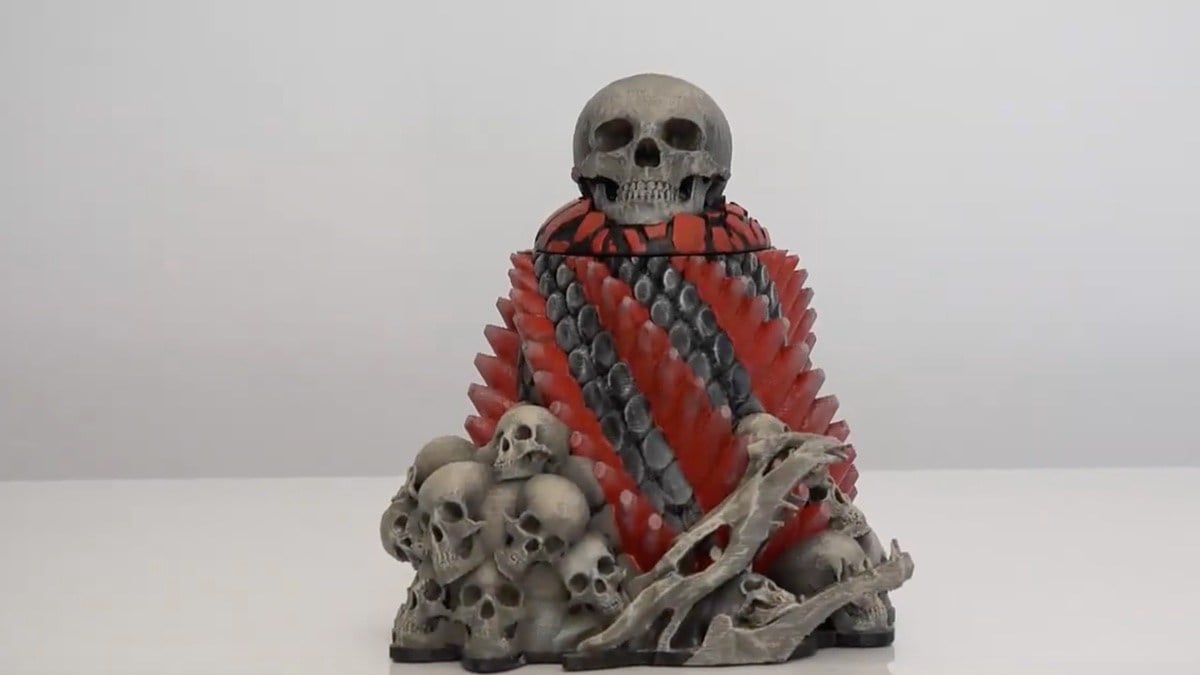 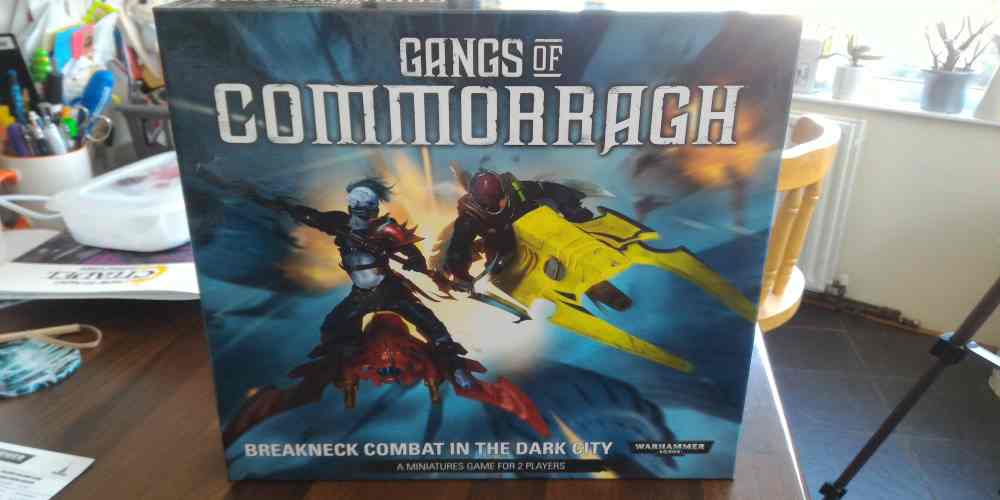