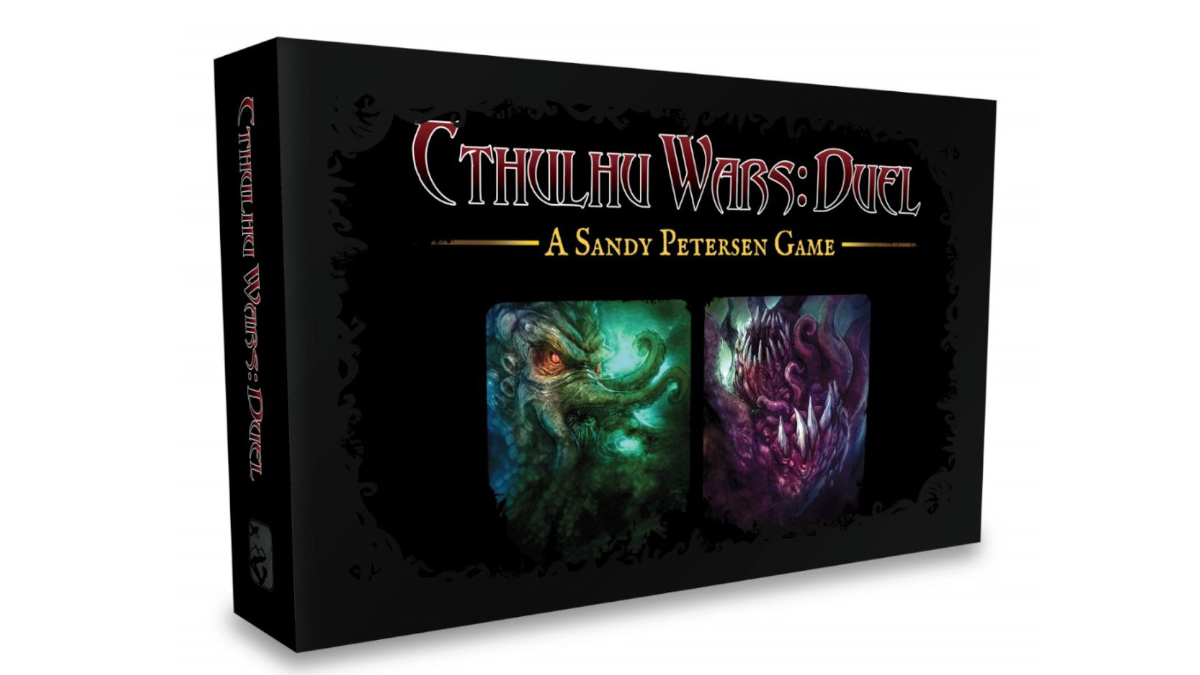 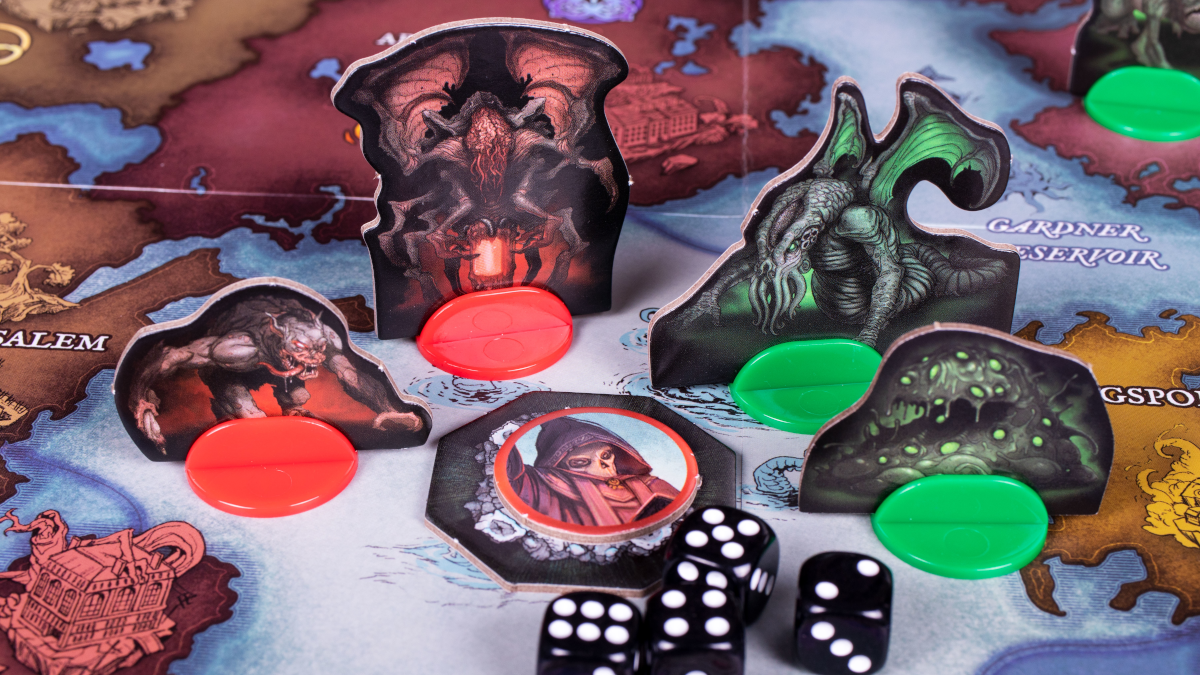 Since the release of the original Cthulhu Wars, I have been pining to own the massively impressive game. Convention after Convention I have walked past the Petersen Games table in sheer envy at the worlds I would love to spend time in that they had on display. Alas, I am a single dad with a mortgage and child support payments. The $199 sticker price was just a bridge too far for me. To be clear I am not complaining about the price. Petersen Games has done an amazing job of giving value (Yes Value) to the game. As someone who collects miniatures and Cosmic Horror minis to be specific the $199 price tag is justified for an Indy game. In spite of that price tag, the game is almost eternally sold out on the Petersen Games website. Those hungry for it often pay hundreds more to own it on the secondary market. This does not happen with many or any other games and is indicative of the popularity of Cthulhu Wars. Many of you who visit this website may already own the game. So how do I solve my problem? I can save up some cash, use credit? Thankfully I no longer have to make that decision.

What is the Cthulhu Mythos?

Cthulhu Mythos is the name given to the world of gods, demigods, and cosmic horror created by the author H. P. Lovecraft. In recent years he has become a controversial author due to his very open racism and xenophobia, but it is important to understand that 100 years after he began to be published, the Cthulhu Mythos has been expanded by hundreds if not thousands of writers. Great writers such as Ramsey Cambell, Robert Bloch, Brian Lumley, Robert E. Howard, Stephen King, Neil Gaiman, Alan Moore, and not to mention Sandy Petersen himself.

Because so many legendary authors have contributed to this mythology, it is very rich and full of amazing stories and concepts that give Gamers an enormous playground to work with.

Robert E. Howard even included Cthulhu mythology into his Conan Saga which makes its place in fantasy pre-dating Dungeons and Dragons by close to 40 years. It even pre-dates J.R.R. Tolkein’s The Hobbit by almost ten years! 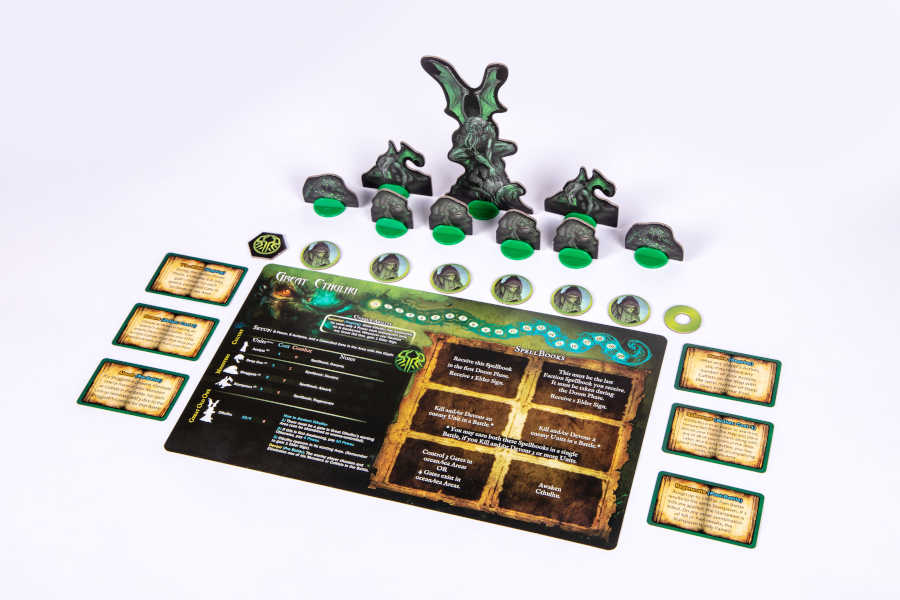 For the first and most famous faction that of Cthulhu you have the main old god themself represented with some amazing artwork on a solid and dense piece of cardboard with a stand. Along with the great Cthulhu, we have two Star Spawn, Two Shoggoth, Four Deep Ones, Six Acolyte Cultists, and power and doom markers. These will be your main players in the Cthulhu faction. Along with them, you get your faction card that will hold your spell books of which you have six.  The top of the card displays your power Counter 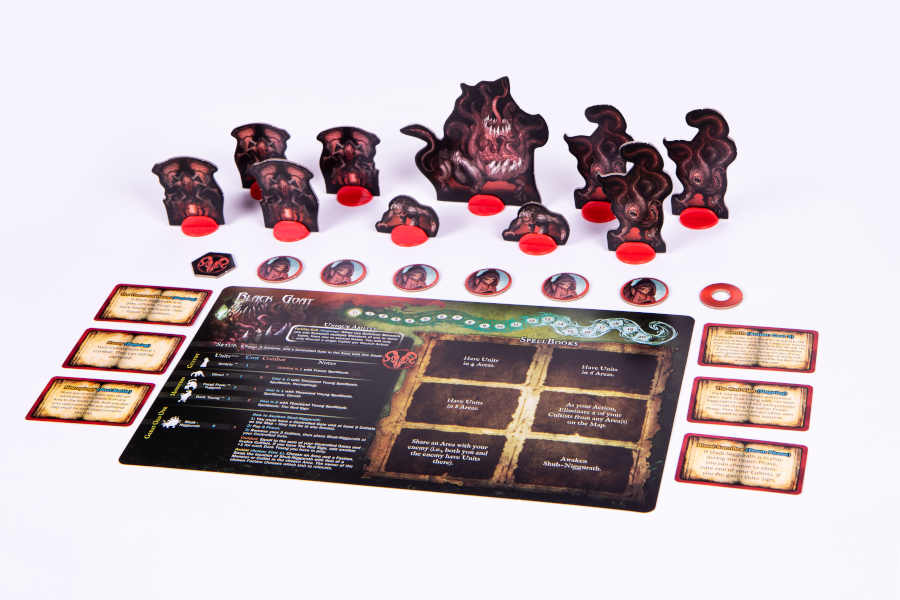 The second faction is The Black Goat or as he is more historically referred to Shub Niggorath. This faction gives you the Black Goat himself along with three Dark Young, two Ghouls, four Fungi from Yuggoth, and six Acolyte Cultists. So as you can see the piece count is asymmetrical along with most of the game. 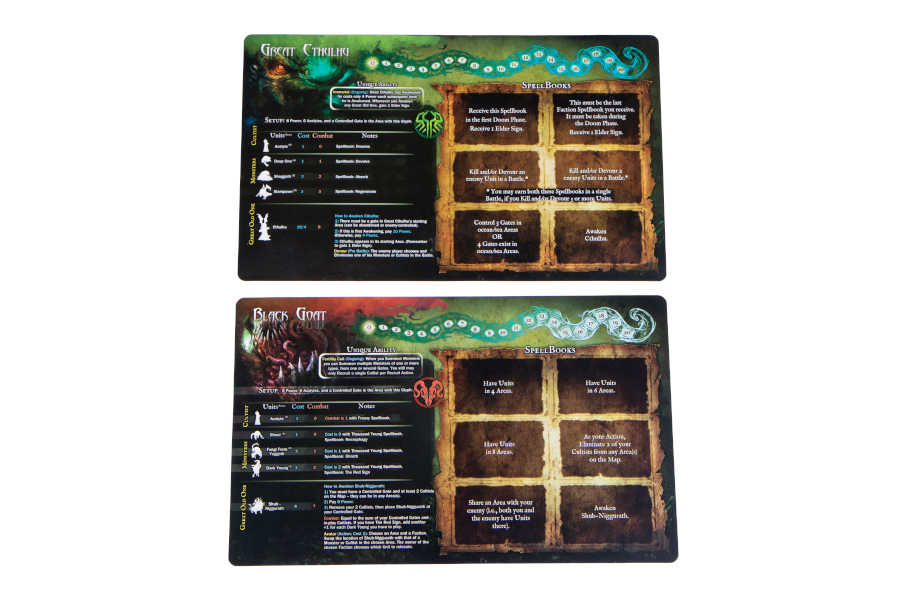 These two boards displaying each faction’s statistics and abilities along with the ritual track displayed at the top and six slots for spell books to keeps your troops in order. Petersen games plan on adding more faction expansions in the future so expect to have a great collection with options for you in the wars ahead. 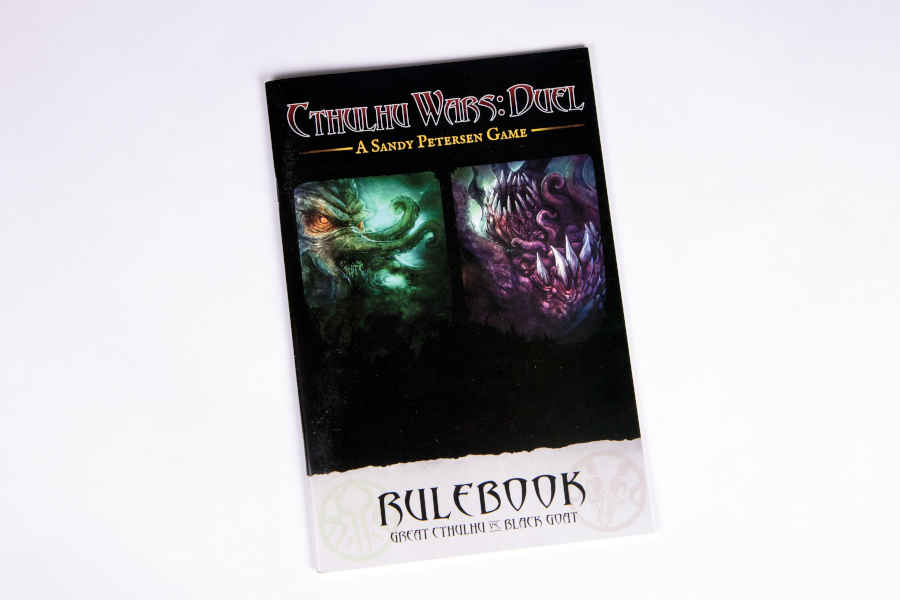 The good news if you have already played with and are familiar with Cthulhu Wars then your learning curve will be very small. Essentially you strip out the strategy needed when playing with 3 or more players and just focus on one enemy which makes it a tighter and faster game. But there are some significant differences such as:

Now that we are past the differences lets talk about how each turn is played out in Cthulhu Wars: Duel 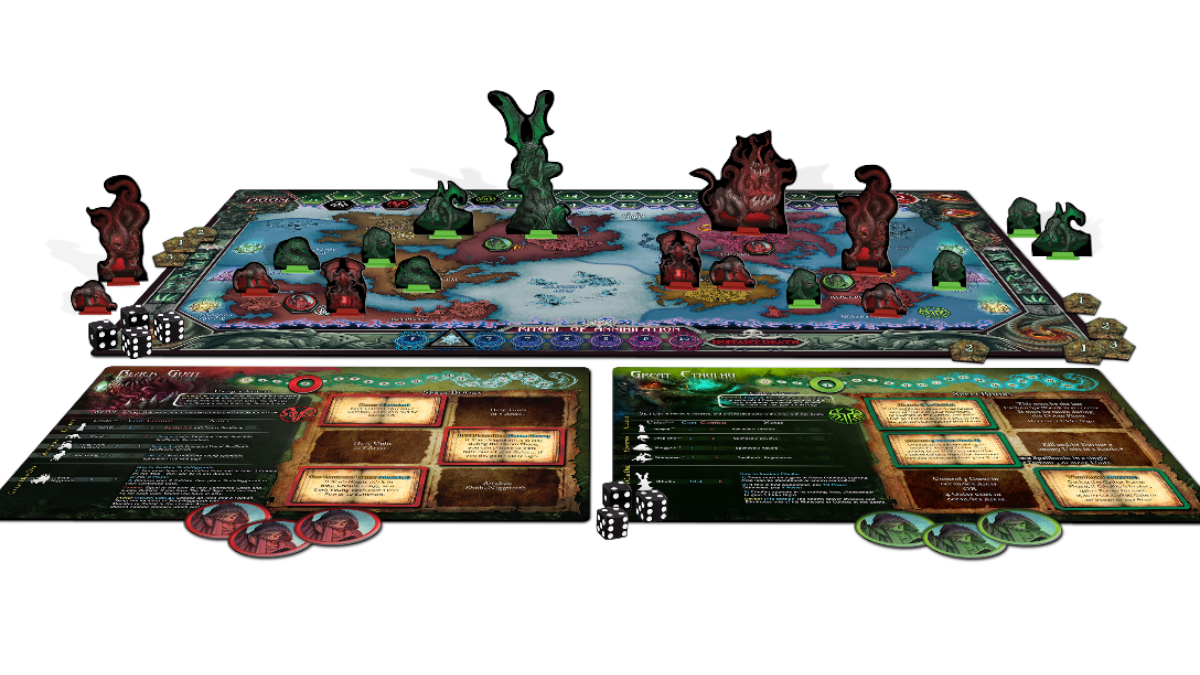 The Object of the Game:

At the end of the game, the player who has the highest Doom on the Doom Track is
declared the winner. 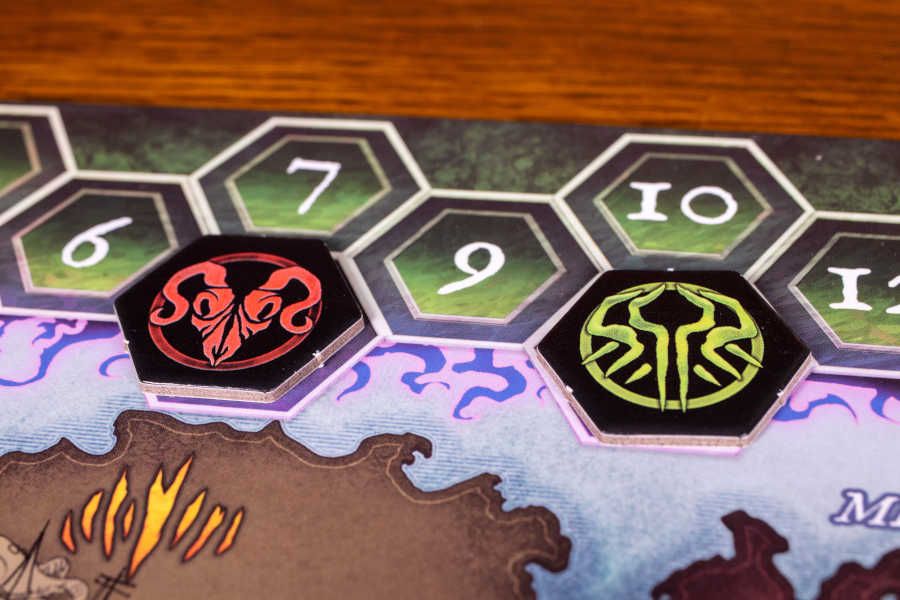 The Doom Track is where winners and losers are declared!

· Gain Doom equal to unit cost
whenever your opponent loses Units
due to your action or response.
Actions:
If the player has any Power, he
performs 1 Action. Add the Decay
marker’s position to all action Power
costs.
• -1 Power to Recruit 1 Cultist
(requires Unit)
• -? Power to Summon 1 Monster
(requires controlled Gate)
• -? Power to Awaken 1 Great Old One
• -3 Power to Create 1 Gate (requires
Cultist)
• -1 Power per Unit to Move
• -1 Power to Battle (requires Unit
with 1+ Combat)
• -1 Power to Capture 1 Cultist
• Pass – Lose all power
OR
· If the player has zero Power, move the
Decay marker up by 1 and end turn.

• Player with the most Power becomes
First Player.

• (Optional) Rituals of Annihilation:
Spend Power equal to the current
position of the Ritual Marker to earn
1 Doom per Controlled Gate and 1
Elder Sign per Faction Great Old
One. Max one Ritual per player per
Phase.
• Special Events and Abilities
(Reminder: No Doom is gained from
Controlled Gates except via Rituals.)

Sandy Petersen, himself offers amazing insight into the strategy of Cthulhu Wars

How to make this great game better

Petersen games have done a great job of making Cthulhu Wars affordable with this new duel system. Like many of you Geeks, I like to tinker mod and improve the things I purchase, and thankfully Petersen games also provide for that desire. Since Cthulhu Wars: Duel is stripped down I wanted to make slight improvements as cash provided so the first thing was to get some great miniatures (Some not all that mini) from the Petersen Games site. If you are like me I had to start with the great Cthulhu himself which comes in at $19.99 but there are proxies for all of the creatures you find in the box so take your time and build the ultimate version of Cthulhu Wars: Duel. Please don’t forget that Petersen Games intends to make many more factions for Cthulhu Wars: Duel so at $29.99 you can add to this gave at your leisure and enjoyment. 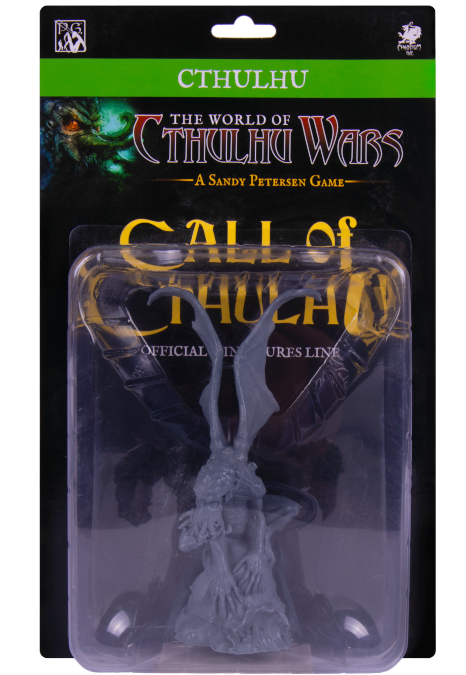 If you are an avid 3D printer or craftsperson there are many great modifications online as well as proxies but with Petersen games presenting this at such a great value, I would encourage purchasing figures through their store and keeping crafting and printing down to making some nice storage or counters for your copy.

Cthulhu Wars: Duel is a dream for tabletop gamers that wanted to play in the realm of the Elder Gods. Petersen Games has allowed budget conscience gamers to dip their toes into the stygian depths of cosmic horror and reward them with an amazing game at an affordable price that is destined to be a legend in living rooms and game shops. Even the new box fits easily on a book or gaming shelf where it will take a place of honor in some dark hearts! There is so much to enjoy in this game from the amazing artwork to the wonderful strategy and gameplay. So what better time than the holiday season to bring some unrelenting doom to the gamers that you love in and out of your family with Cthulhu Wars: Duel!

A sample of Cthulhu Wars: Duel was made available by Petersen Games.

The opinions in this article are the writer’s alone and not that of the manufacturer or editorial board. 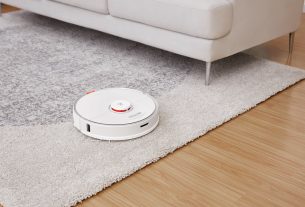