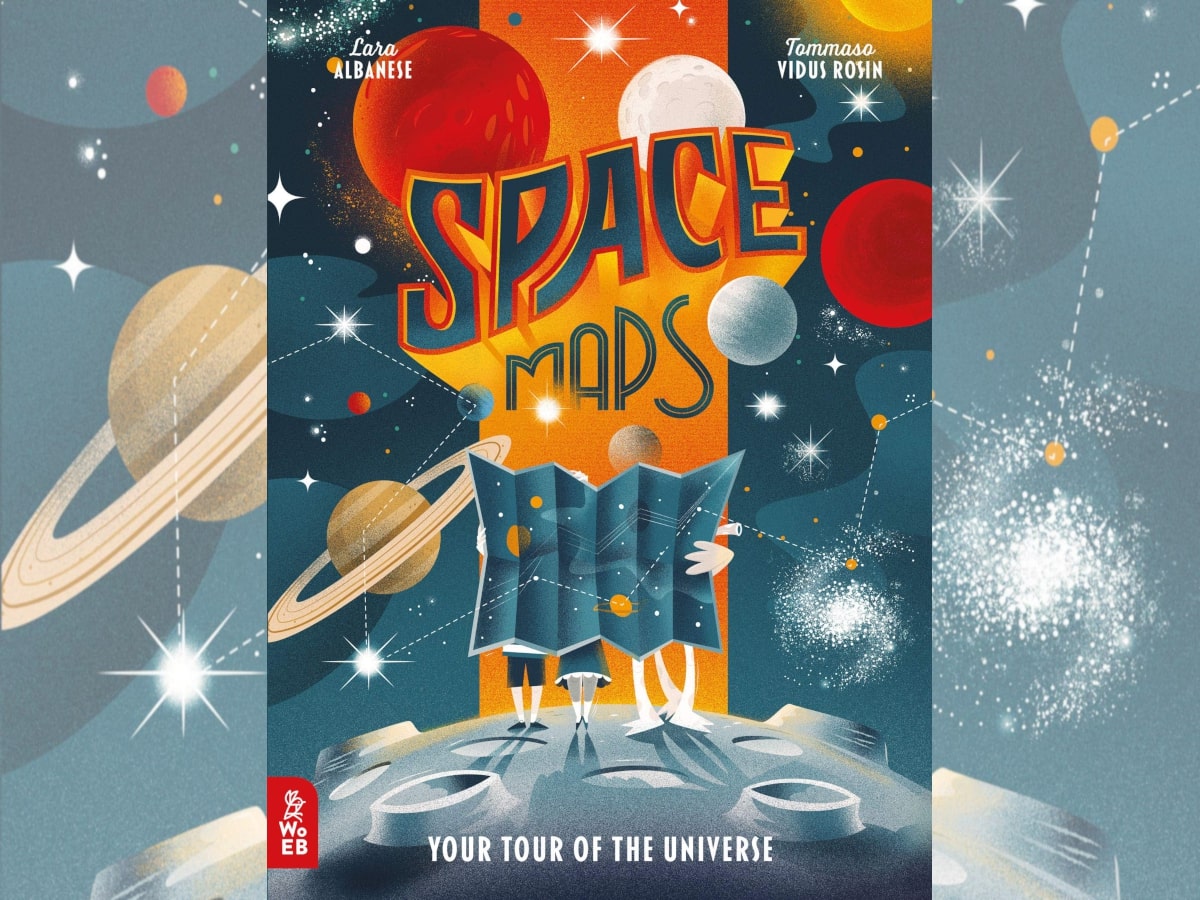 This Week’s Word Is “Celestial”.

I’ve read and reviewed some great books for GeekDad and Word Wednesday over the years, but I don’t think any of them have been as good as Space Maps by Lara Albanese and Tommaso Vidus Rosin. I love everything about this book from first page to last.

What is Space Maps?

Space Maps is published by Whatonearth Books, who published the amazing Britannica Encyclopedia I reviewed recently. It’s a large-format hardback (approx 15″ x 11″) consisting of just under 90 pages and is filled with lovely illustrations. Its aim is to teach the basics of astronomy, taking us on a journey through the Solar System and beyond. There are no photos in the book, everything, including planets and nebulae, are drawn. 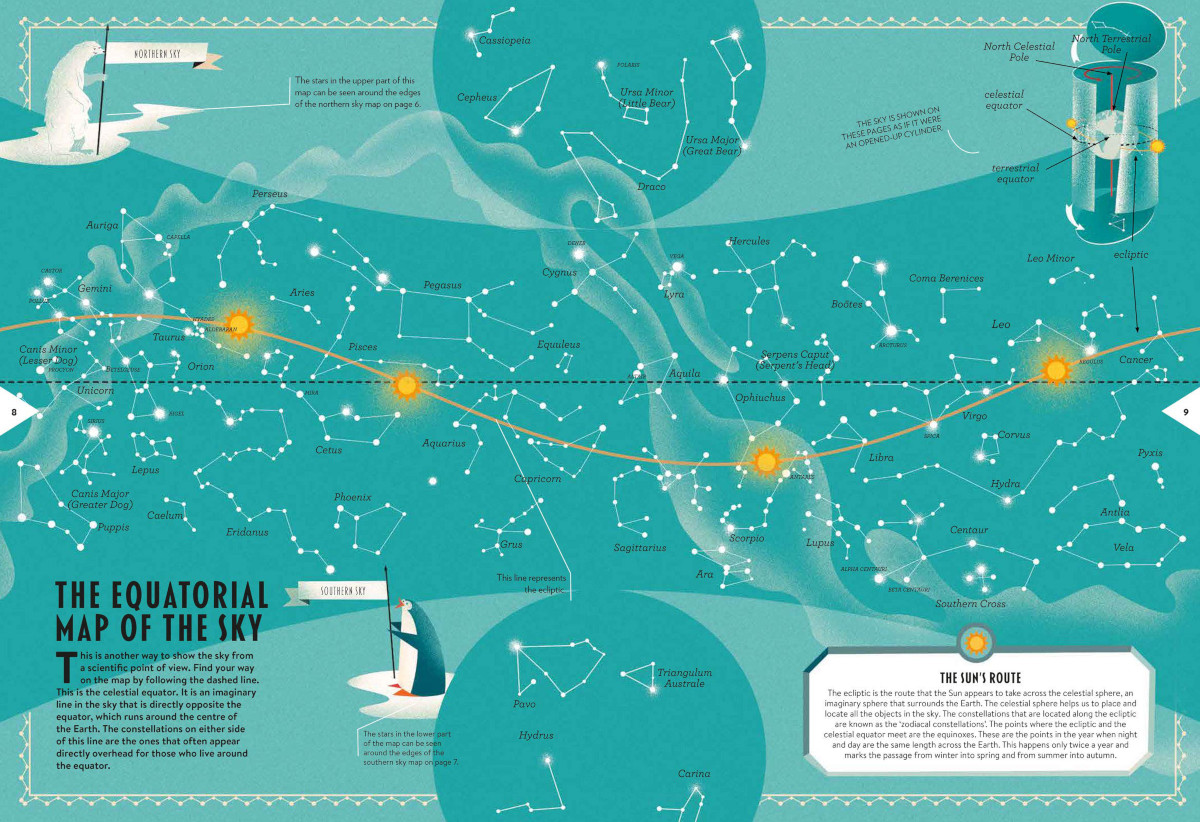 Space Maps is broken down into 5 sections:

The first section focuses on positional astronomy. It looks at how star maps are made, showing maps from both hemispheres, but also describes equatorial maps. It explains why the star field changes as the Earth spins, and how the seasons change with the Earth’s rotation around the sun. It also looks at some culturally significant maps: The Greek Constellations that I grew up with, a Chinese star map, and a South African star map.

Our position in the universe. From outside moving inwards, starting with Galaxies, the Milky Way, and the Sun, before moving into the Solar System. Space Maps then takes a closer look at the Earth and Moon, discussing eclipses, volcanoes, axial tilt, and all manner of geographical details. There’s a beautiful page devoted to Light Pollution. The sad thing about Light Pollution is it looks AMAZING! The Moon pages focus on its phases, major features, and humankind’s quest to land there. 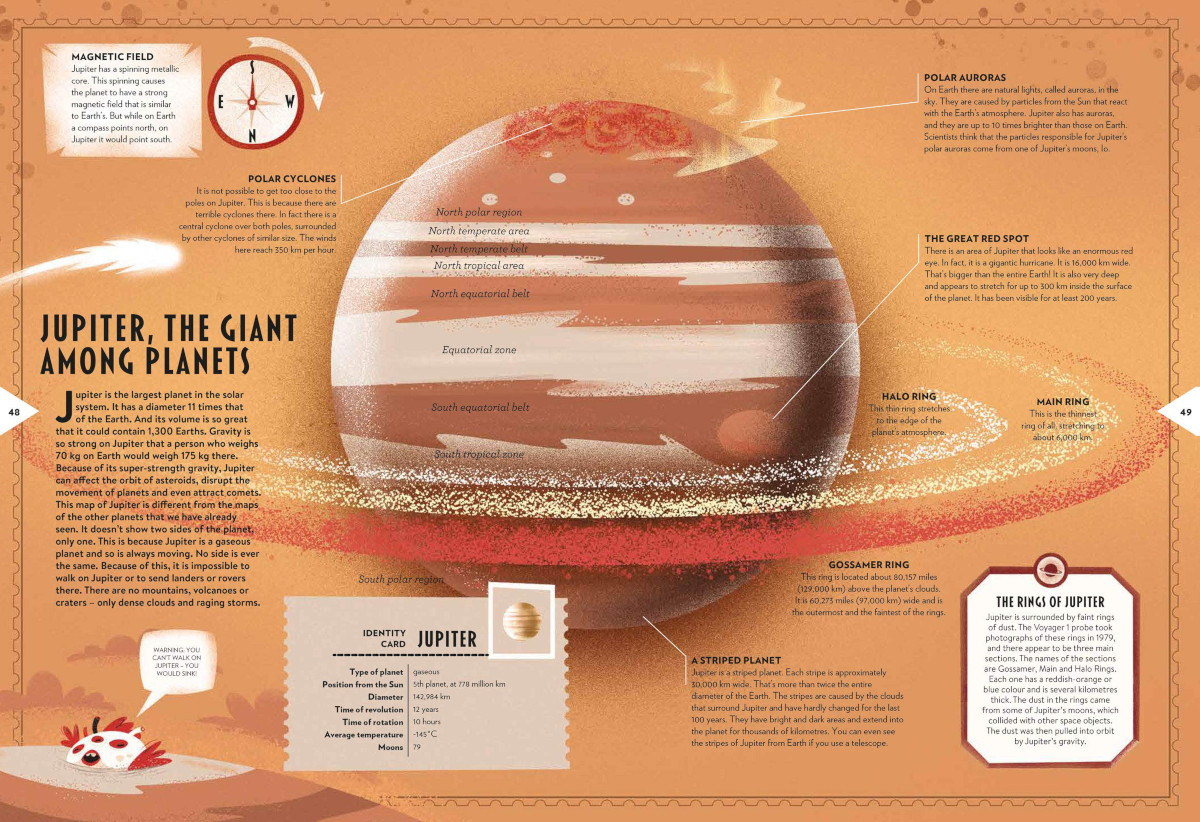 This section has maps of every planet, with major features labeled. I had no idea Mercury has Proust, Homer, and Calvino craters. I had also no idea most of its features were named after writers and musicians. Each of the book’s planet entries has an “Identity Card’ that details all that geeky data that makes learning about the solar system irresistible. I love learning how long it takes planets to rotate around the sun and which one’s have a day that lasts longer than a year!

Mars gets an extra page about the various probes that have been sent there, and there are extra pages devoted to Jupiter’s moons. Both Pluto and Charon are featured. Reading Space Maps is the first time I’ve ever really taken note of the geography of Charon. I had no idea it featured a “Mordor Macula,” not to mention a Spock Crater and Kubrick Mons. Who knew astronomers were such a bunch of geeks? (Yeah, OK, we all knew that.)

I also didn’t know that Pluto had 5 moons, each one named with an Underworld theme. Space Maps has made me realize that my astronomy knowledge is sadly out of date.

What is Beyond our Solar System?

This section takes a section of Space and examines what lies within it. “The Sky Behind Ursa Major” and “The Sky Behind Orion” are two of the page headings in this section, as well as the “Large Magellanic cloud.” This section opens young eyes up to the wonders of the distant universe. The final double-page spread is devoted to Exo-Planets with a map of where some of the major ones are located, with a description of those that are most like Earth.

The final section takes a look at the Earth’s atmosphere, asking where does Space really begin? It describes how astronomers observe the skies above us and the artificial satellites orbiting the Earth. Finally, the book looks at spacesuits, rockets, and the International Space Station.

Space Maps closes out with a glossary and a bibliography of sources. 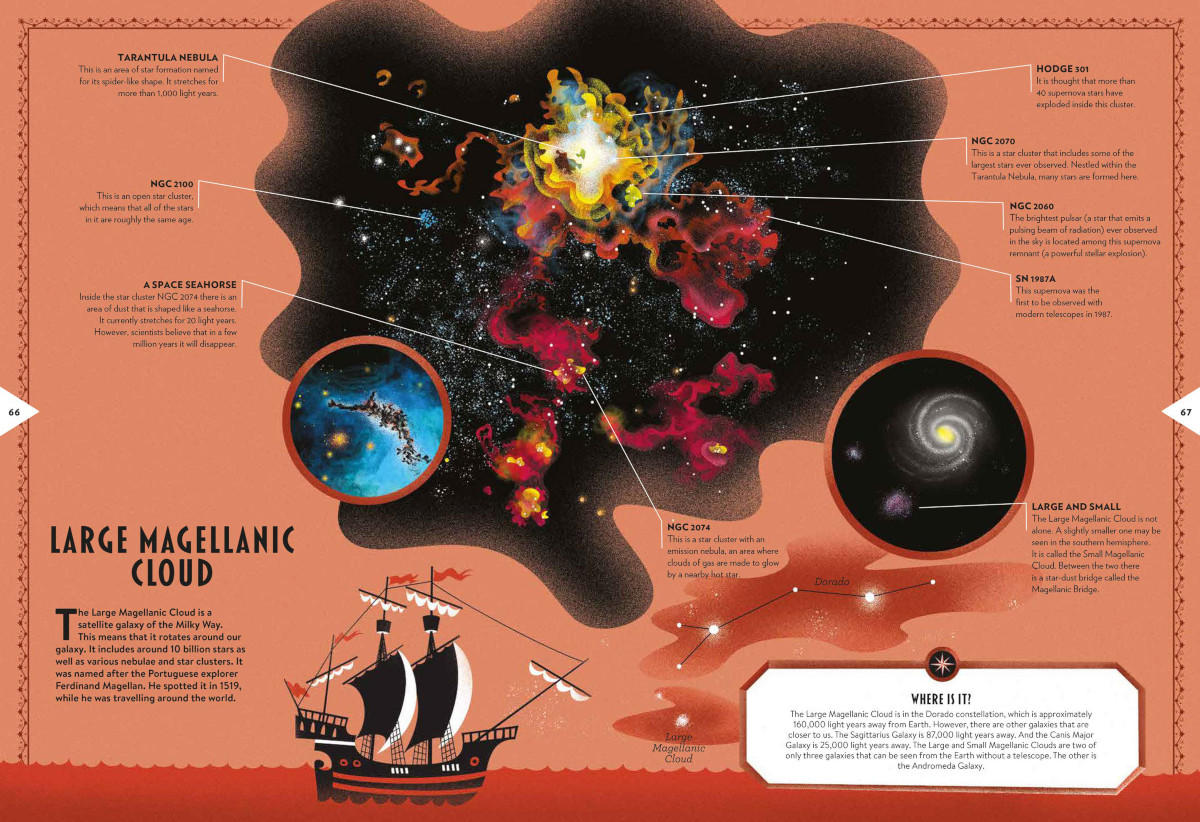 It’s hard for me to overstate how much I love this book. The art style particularly appeals to me and that’s a major factor in my designating it the best book I’ve ever reviewed for Word Wednesday. That and the sheer breadth and depth of knowledge included. As well as hard facts about the planets, the sidebar texts introduce important astronomical concepts, such as gravity, the life of the sun, and black holes.

The book is very engaging, thanks to its visual appeal. The diagram labels are bursting with interesting information too. It’s everything an introductory astronomy book should be. It delivers a large amount of fascinating information about space, opening up young readers’ eyes to the wonders above them.

Star Maps is the perfect gift for any child (or adult) from the age of around 8 upwards. It’s for anybody who loves to look up into the sky and wonder what’s out there. I can’t praise this book highly enough!

If you’d like to pick up a copy of Star Maps, you can do so, here in the US and here, in the UK (Affiliate links). 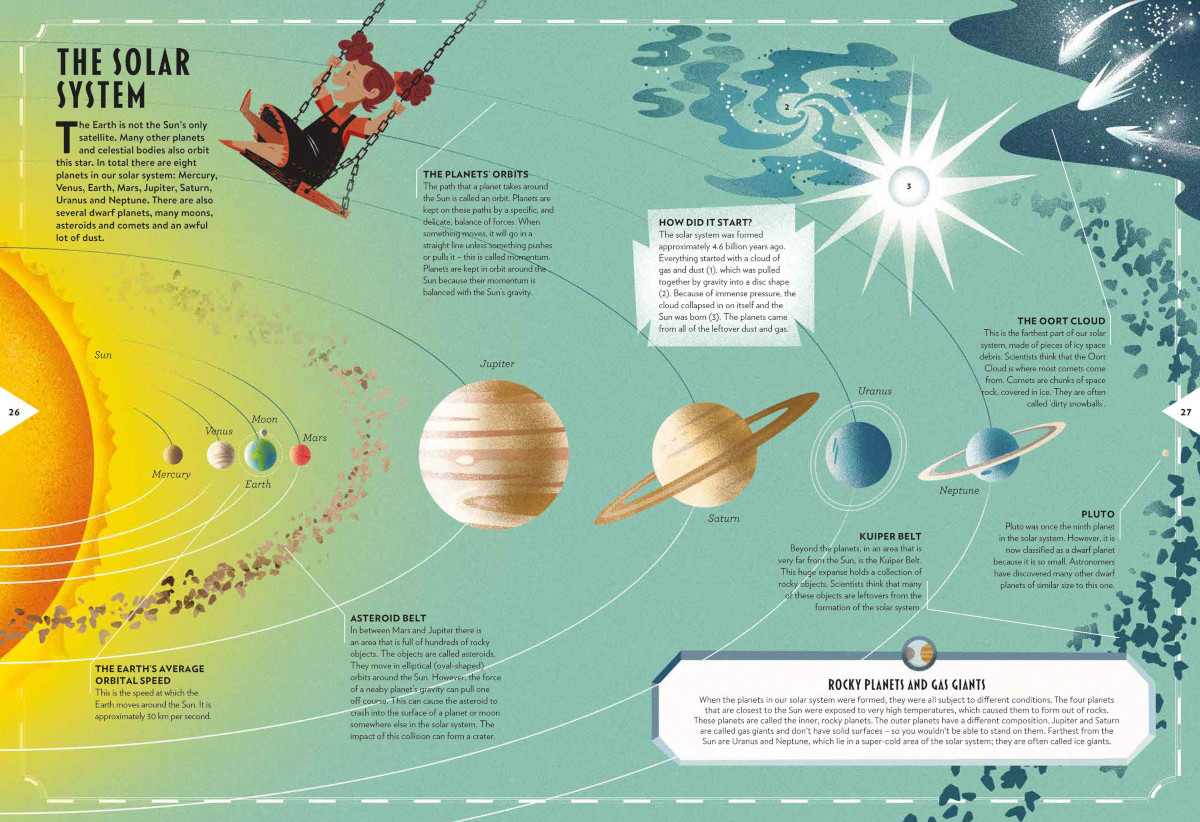 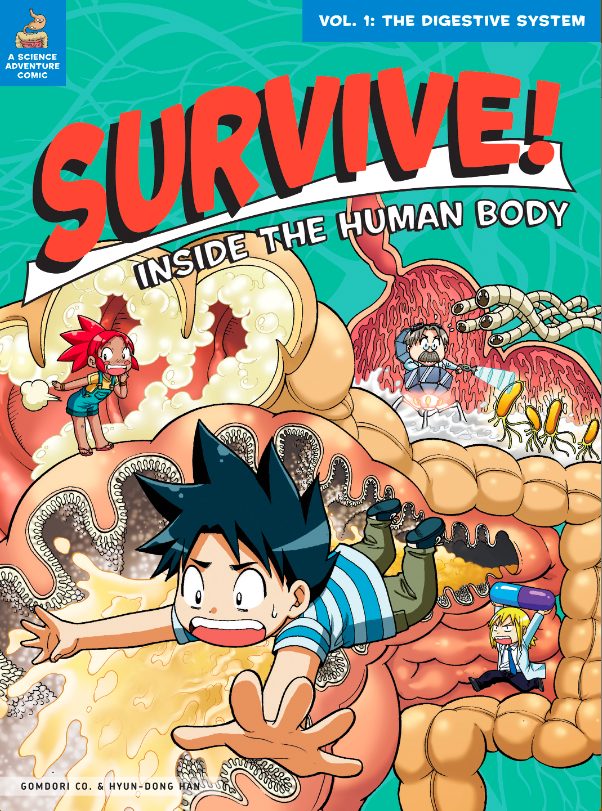 Can You Survive Inside the Human Body? 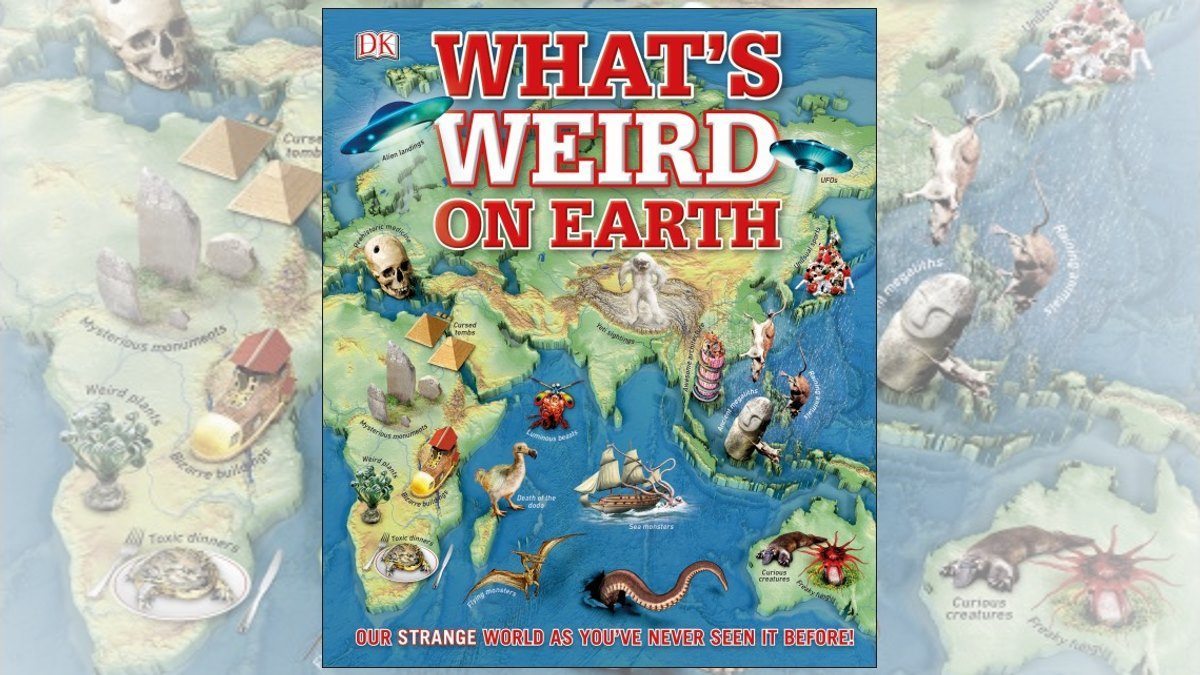 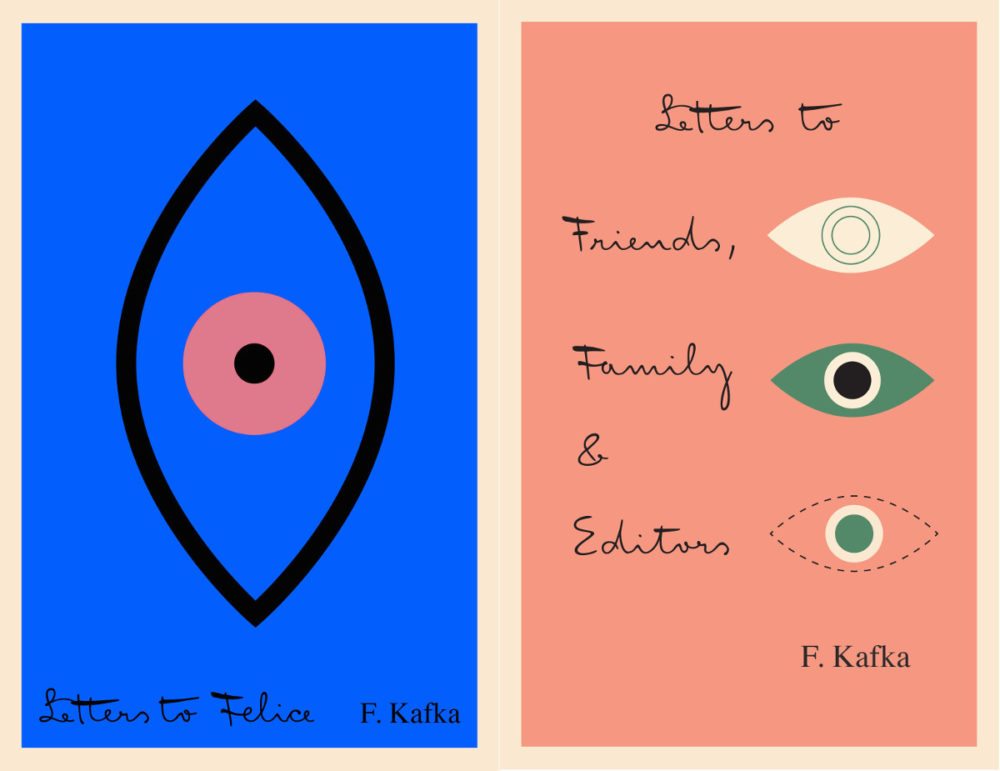 The Letters of Franz Kafka