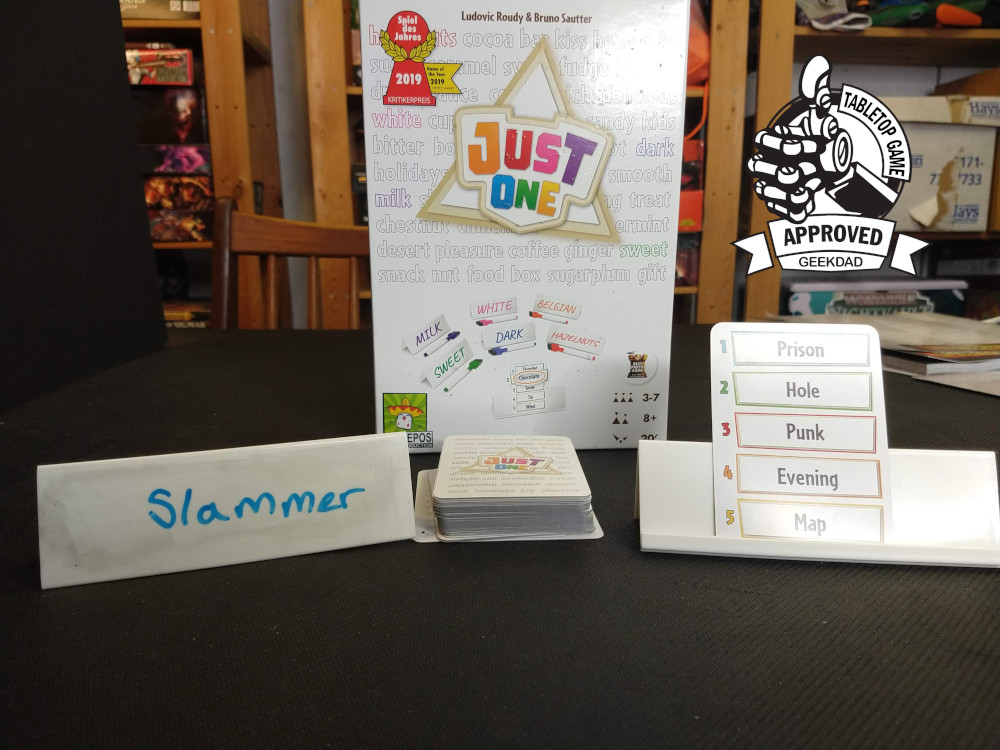 Just One from Repos Production is an easy to pick up, quick to play, party game for 3-7 people. It’s a word game fun for all the family, starting from aged 8 upwards. Players work together to correctly guess as many clue cards as possible over 13 rounds. Games last around 20 mins.

Just One is top-notch family fun that will see you all working together in a light-hearted manner. It’s challenging but not taxing. If, like us, you’re a family of five, not able to do too much right now, it’s a perfect tonic for a fractious lockdown. This is so much fun, I didn’t hesitate to give it GeekDad Approved status. If that accolade wasn’t enough, it also won the 2019 Spiele Des Jahres. 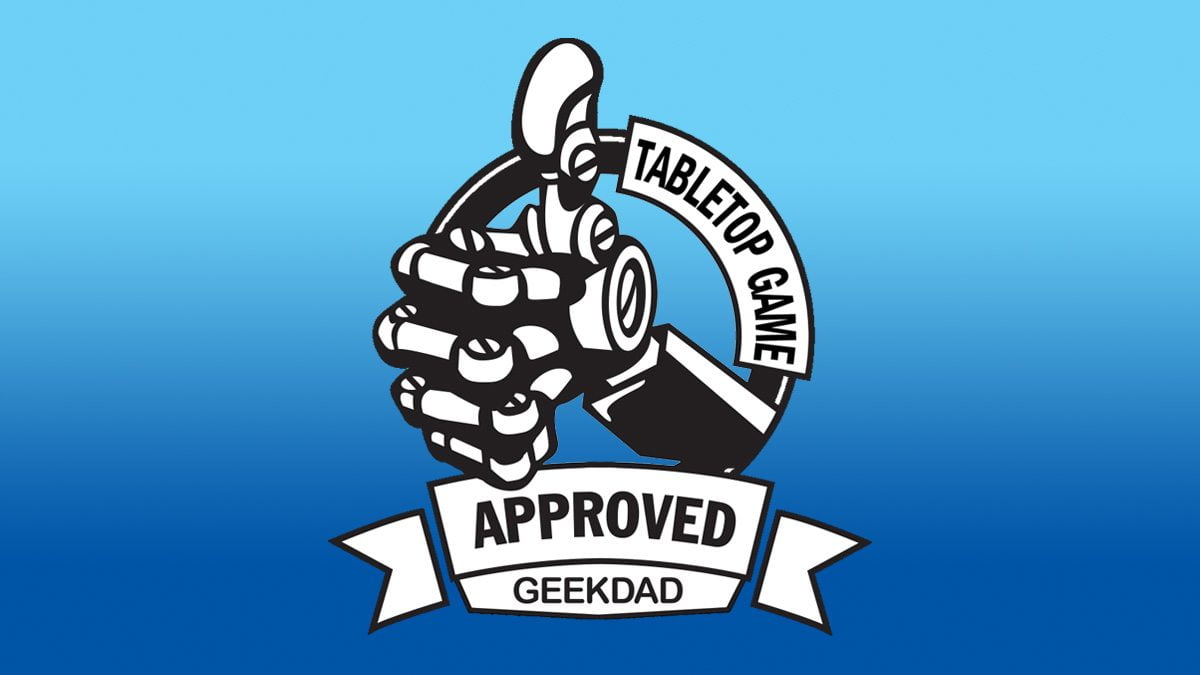 What Is Just One?

Just One is very much like a traditional family game, such as charades or Pictionary. In this case, everybody is working together, though it would be easy to adapt to larger groups and split into teams. Games take place over a number of rounds with one player guessing each round and the others offering single word clues.

The box contents are pretty simple as this is a simple game.

The easels are a nice touch. They are shallow rectangles, similar in shape to a scrabble tile holder, though a little smaller. When players are giving clues, they can write on the plain side; when they’re guessing, the other side has a small lip in which they can stand the card.

The felt markers come in a pleasing array of colors for your family to enjoy. (Or bicker over, depending on which way the wind is blowing.)

Prices vary for Just One, so do shop around. You should be able to find a copy for around $25 in the US or £15 in the UK.

How Do You Play Just One?

Games consist of 13 rounds of guesses. Play starts by taking 13 cards at random from the box and stacking them face down.

On a given round, one player is designated the “Active Player,” which is sort of ironic as they actually do less than everybody else that round. They will be trying to guess a word from one of the cards.

One card is taken from the 13 card deck and placed facing away from the active player, on their easel, using the side with the lip. The active player must not see this card at any time in the round.

Each card has 5 words written on it. The active player calls out a number 1-5. This is then the word that the other players will be trying to communicate back to the active player.

To do this, each other player writes a single word on their easel. Players then compare words. (All the time the active player must look away.) Any words that are duplicated are removed from the game. Once that has been done, the remaining clues are revealed to the active player, and they have to guess what the word on the card is.

If they guess correctly the players keep the card. If they fail the card is set to one side. Play continues until the deck is empty (i.e. 13 rounds in total). The active player is swapped each round. The more cards you all guessed correctly, the better you have done collectively. There is a little table to indicate how well you’ve done (1-2 = Terrible, 11-12 = Great!) but you can probably all count, so this is not entirely necessary.

There is one small 3 player variant rule, which is that both of the clue-giving players write down 2 clues, presumably to give the active player a little more to work with.

Why Play Just One?

Just One is a wonderfully simple game that, as a result, is a great deal of fun to play. It sets up a challenging dichotomy of wanting to make your clues as obvious as possible, whilst also making them obscure enough that nobody else uses the same word. Your clues also need to be meaningful to the person doing the guessing, adding a personal nuance to the game that shifts with every round.

The game absolutely bears repeat playing because even with the same clues, a slight shift in personnel makes for an entirely different game. Just One works equally well for people who have known each other for years and for those who have only just met. You just have to shift the focus of your clue-giving. Just One makes for an excellent ice-breaker or short word game in schools.

There is a small issue with playing in a group of disparate ages, particularly younger and older children. Our youngest is 8 and we modified the rounds a little to accommodate that. Rather than have the active player picking a number at random, sometimes it is better to have the players who can see the card pick the number, particularly if the youngest player is the active player. This means you can avoid any tricky clues for which the guesser may not have any context. For example, “Decathalon” is a word that my youngest would really struggle to guess.

The game’s components are fun. I guess you could probably play just fine with only pens and paper, but the colored pens and plastic easels make the game a fun tactile experience for younger players.

Just One is like many of the best games: simple to execute and tremendous fun whilst doing so. It’s easy to see why the game won the Spiele Des Jahre. It isn’t the most tactically taxing game in the world, but it is easy to teach and fun to play with friends and family. I think it would even be very to easy to play over Zoom. With the holiday season rapidly approaching, if you were looking to add Just One more game to your collection, this might be what you need! (Terrible puns optional.) 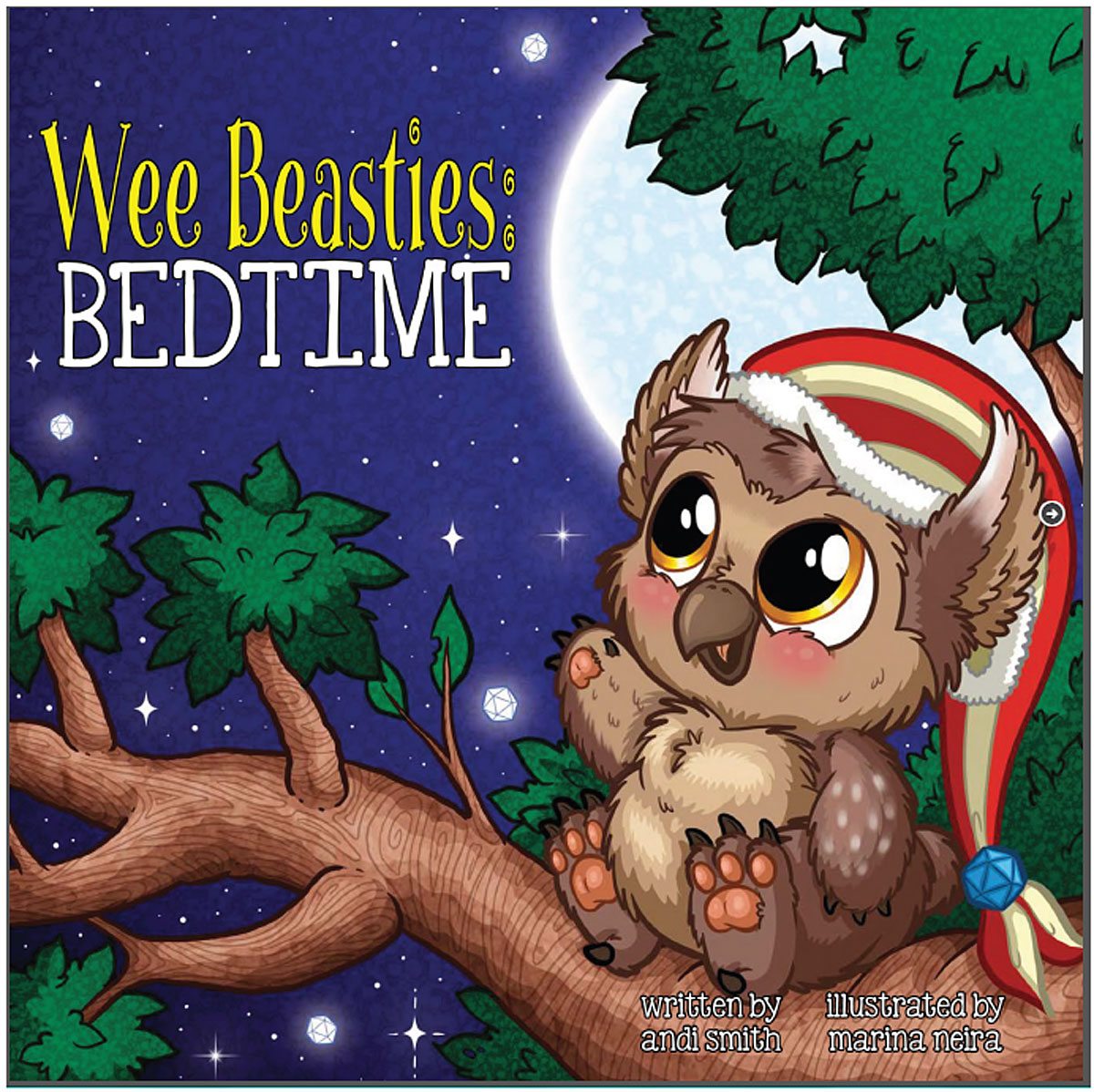 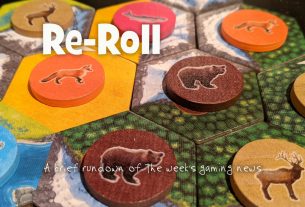 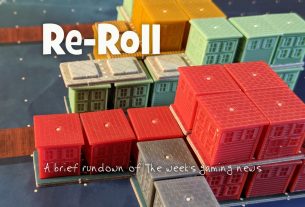