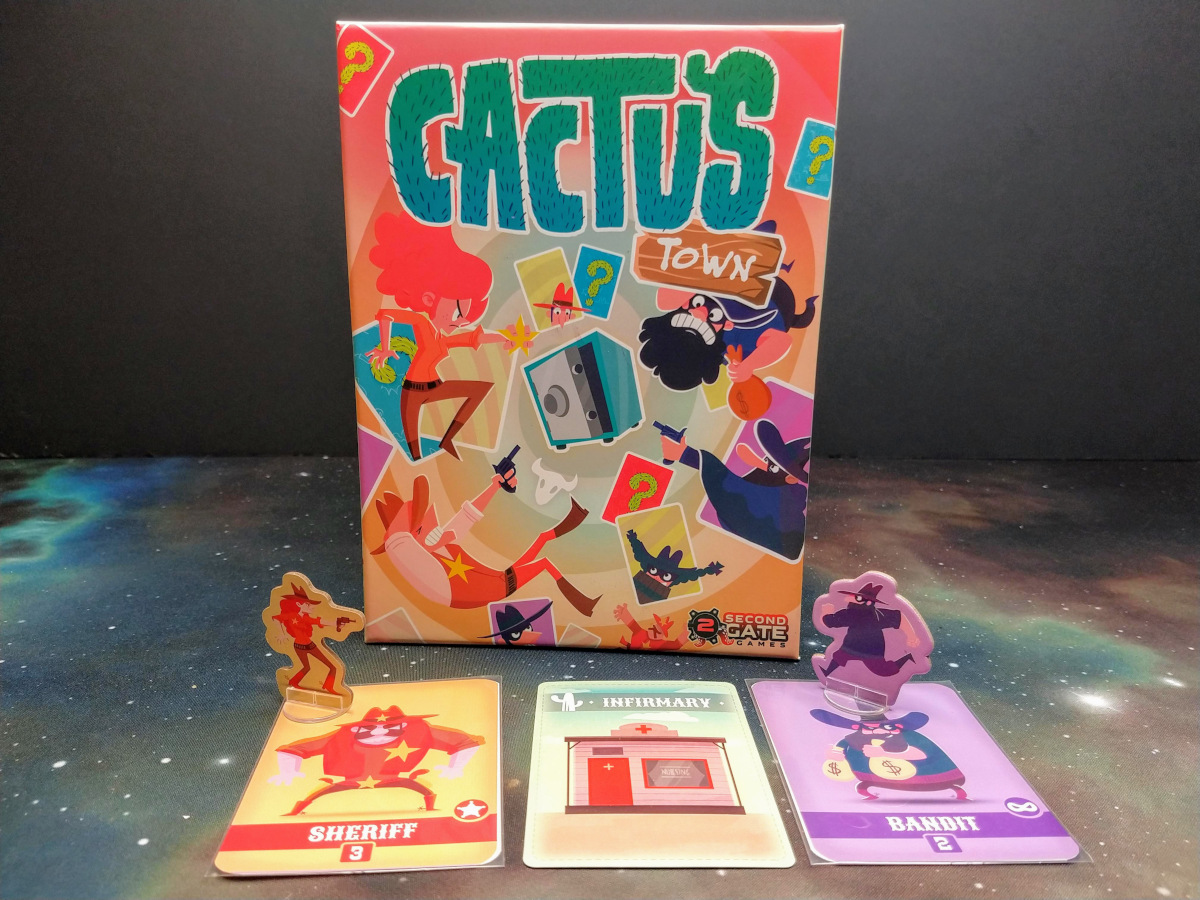 A few years ago, I reviewed a behemoth of a game created by Second Gate Games. Monster Lands was a dice worker placement game that took a long time to play but was engrossing throughout. Now Second Gate is back with something much smaller: a deduction/deception game for 2-4 players. Cactus Town plays in 15–45 mins and is suitable for players around 7 upwards. It’s fun, fast, and affords multiple opportunities to dupe your friends.

Cactus Town is available on Kickstarter now, and has already funded!

What Is Cactus Town?

Cactus Town is a Wild West themed, small box game for 2 to 4 players. It’s an asymmetric simultaneous action planning game with each player chasing a different set of goals from the other. Each side has a different win condition that competes against the others. The game is a race to fulfill your goals before your opponents can do the same. Each player has only four actions they can employ. Can you outwit the other players to make sure your actions are utilized better than the rest?

Note: I have a prototype version that was created pre-COVID 19. The game has undergone many iterations since then and my copy is quite out of date. The artwork has changed and whilst I have tried to reflect the new artwork/card names I may have made some errors.

How do you play Play Cactus Town?

You can download a full copy of the rules, here.

How do you do those things? Read on!

The game has two modes, basic and advanced. Obviously, for your first games, you should use the basic cards. The two games are essentially the same, but the advanced version includes additional effects that occur when new buildings are revealed.

How do you set up Cactus Town?

First, you have to set up your town. The Sheriff’s office card goes in the middle, then the other 24 building cards are laid out in a 5X5 square with the Sheriff’s office at the center of the square. The outmost edges of the square are the town’s edge and considered to be adjacent to the wilderness. Once the town is set up, the cardboard standees assume their positions. There is also a deluxe pledge level that replaces the standees with plastic miniatures.

The buildings on the starting positions are then revealed and the first player marker is given to the sheriff player (unless the sheriff isn’t playing, in which case it goes to the outlaw player. Each player is also given 4 action cards.

The outlaw player draws four cards from the target buildings deck. These will be the buildings they need to steal their plunder from.

The bounty hunter draws one card from the target buildings deck. This is the first building they must steal a horse from (the second building is revealed during the game).

How does a Cactus Town turn work?

There’s quite a lot that goes into a Cactus Town turn – yet once you play it’s simple and intuitive. After all, each player only has four possible actions. Each turn is divided into two phases. The first phase is the “Planning phase.”

In the planning phase, players stack their action cards, taking turns, beginning with the first player (the current holder of the first player token). The first player chooses an action from their hand of actions and plays it face down on the table. Play then moves clockwise, with each player stacking a card on top of the previously laid one. This is repeated until each player has added 3 action cards to the stack. Cards are kept secret. After the action deck is complete, each player will have one action card remaining in their hand, and there will be a stack of face down actions, made up with a number of cards equal to 3x the number of players. That completes the planning phase.

In the “Action Phase,” the cards in the action stack are then turned over in order, starting with the top card (i.e., the very last card to be played in the planning phase). Each action is taken by the player that originally placed it in the stack and carried out. This means the player who stacked the very first card will take the final action of the round. The actions chosen during the planning phase play out in the reverse order in which they were stacked. (This is a key point – it’s very simple in essence, but really makes your brain hurt in execution; in a good way.)

So what actions can be carried out?

There are three basic actions that can be carried out by all of the sides in the game (with one minor exception – The Bounty Hunter can’t sneak). Run, Duel, and Sneak.

Each side also has its own special action. They have one action card that represents this. This card is very versatile.

Once all the actions have been revealed and acted upon, players collect up their action cards and the new player token passes to the next player in a clockwise direction. Then a new round begins, starting with a fresh planning phase. The effect of passing along the first player marker is that now the player who previously choose their action first, now chooses it last. They will place the last action card on the stack, and which will then become the first to activate in the subsequent action phase.

How do Cactus Town duels work?

Duels are a key component to Cactus Town and are very easy to resolve. The player who initiates a duel does so between two standees that occupy the same building. One of those standees has to belong to the dueling player. To resolve a duel, both players roll a D6, and whoever gets the higher roll wins. But wait, there’s a catch. Players can attempt a second shot, in order to boost their chances of success.

During the planning phase, players are asked to stack 3 of their 4 action cards, leaving one remaining. This card should still be kept face down and secret, because you can use it for your second shot. Action cards also have a number on them which don’t affect their other properties but are used as boosts for a second shot. If you decided you want to boost your dice roll, you flip the remaining action card to add its value to your duel score. It’s worth noting that the more useful the action, the higher its boost score will be (usually 1, 2, or 3). So if you want to have a better card to give you a second shot boost in a duel, you’re going to reduce the effectiveness of your actions during the action phase.

It’s also worth noting, that your opponent in the duel can react to your second shot with a second shot of their own, even after you’ve revealed yours. So choose wisely!

The loser of the duel is either stunned, if they’re an outlaw, or pushed away up to 3 hexes if they’re anything else. Winning a duel helps bounty hunters and sheriffs fulfill their goals, whilst they help bandits push their enemies out of position.

The basic game is simple to pick up and play. Yes, there are a lot of options, but once you know what your actions do, there isn’t much else to learn. There is also a “Gunslinger” mode which adds a little more complexity.

Some buildings have extra instructions on them that are carried out when a building is first revealed or perhaps conditions that apply in that building only, such as “Deputies win any duel here” at the prison. Most of the cards give players tokens they can use during duels, such as a peace pipe that stops a duel from going ahead, bullets that give players +1 to their duel die roll, or reload tokens which allowed players to reroll their duel die. The final token is a trap, which can be used to stop standees from moving into a particular card.

The Cactus variant adds another feature, in which unexplored buildings can be blocked by a cactus token.

Why Back Cactus Town?

Cactus Town is a light yet strongly thematic game, that is simple to play but has lots of depth and replayability. Its asymmetric nature gives games a great deal of variety, especially if you mix and match which side you play. It’s one of those great types of boardgames, where you gradually learn tactics that work for your chosen side, until one of your pesky opponents realizes what you’re up to, after which, it’s back to drawing board to try to thrash out some new unstoppable plays. Cactus Town is a tiny box game with its own evolving internal meta, especially if you play with the same people regularly.

The programmable action nature of the game gives lots of opportunity for bluffing and double bluffing, not to mention opportunities to completely outsmart your opponent, and ruin their plans, or more than likely, completely fail to predict what everybody else is going to do and find yourself standing on completely the wrong square, with no chance to do what you intended. I particularly like that the actions are decoded in the opposite order to which they’re programmed. It all adds to the mayhem. (There is a variant to play with straight programming, which might be a little easier for younger players to pick up the game, but I haven’t tried it.)

The two-player game plays very quickly once you both know what you are doing, but, I think the more players you have the better the game is. A crowded board makes for some crazy fun, though the poor old sheriff might not know which way to turn!

I’ve been in touch with Second Gate Games throughout the long gestation period of this game (thanks to COVID-19 related delays) and they are committed to making the game as good as it can be. The Monster Lands campaign was one that was full of surprises and I know the team has more up their sleeves for Cactus Town.

Cactus Town makes an excellent warm up game for game night, coming in at around 15 mins per player. It’s also a great way to introduce new gamers to some of the great mechanics that modern games have to offer. It captures its Wild West theme perfectly, the lawlessness of the town’s denizens and mayhem on every corner. And, just when you think you’re going to win, one of your pesky opponents will invariably pull out the right action to thwart you, or worse, have programmed their cards to grab victory before you have the chance. Of course, at this point, you’ll want to grab your revenge. One game of Cactus Town is never enough.

If you do want to back Cactus Town the Standard game is 25 Euros which is about $30 or £23. The Deluxe version is 49 Euros ($57, £45). At the time of writing there are still some early bird deals available. Don’t forget to factor in postage. There is a comprehensive list of postage prices on the campaign page, but US mainland postage of the basic game is an extra 11 Euros.

You can find out all about the Cactus Town campaign, here! 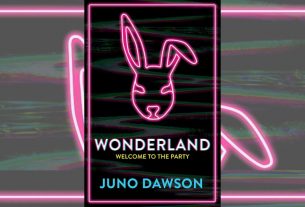 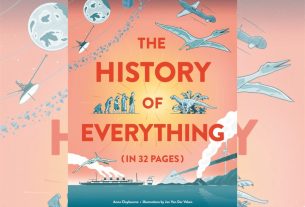 Word Wednesday: ‘History of Everything (in 32 Pages)’ 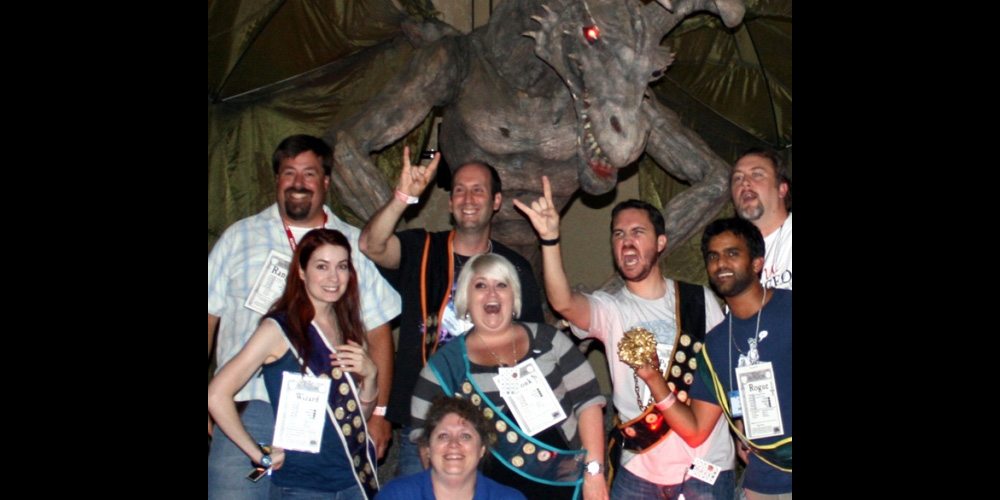 Gearing Up for True Dungeon