A lot can happen in three years. Between her two most recent releases, “Brooklyn Baby“ and “All the Ladies,” New York City’s Joanie Leeds became a single mother, a solo recording artist, a change-maker for gender equality inside the children’s music community, and now an online festival promoter.

Joanie is celebrating her upcoming album with the All The Ladies Music Festival (click the link) on Friday, April 3, featuring a lineup of 14 female artists including Lisa Loeb, Lori Henriques, Suzi Shelton, and more. All of the performers are featured on “All the Ladies” (out the same day) and perform 15-minute sets, from 12:30 PM-4 PM, when Joanie wraps up the show.

As early as 2018, Joanie thought about creating an all-female produced and performed album. “Before any song was written, I knew I wanted a female producer, engineer, mixer, and master engineer, even before I made a list of instrumentalists and vocalists – which of course also had to all-female,” she explained. “Last year, the ideas began to come to me and I started writing songs with this concept in mind.”

New York’s musical community comes together at coincidental intervals, and fortuitous timing played a part in Joanie connecting with Grammy winner Lucy Kalantari. “It felt relevant to engage a female producer and I was burning to start this album,” she recalled. Joanie took her daughter to see Red Yarn (Andy Ferguson) at Symphony Space and Lucy was there with her son, Darius. “After the concert, we all went out for lunch and I whispered my idea to her about an all-female album,” Joanie continued. “Lucy seemed interested. She’d been wanting to produce someone else’s album for some time and connected with the idea. So we were off and running.”

Joanie had a long list of “women to work with,” mostly singers, but trimmed it for logistical reasons. “I would have loved to have even more women involved,” she sighed. “Ultimately, it was a large, amazing ensemble. Lucy found all of the instrumentalists and recorded most of them in her home studio. She really took the reins – I wasn’t even there for most of those sessions!”

“All the Ladies” tackles mature themes, including divorce, gender inequality, and even miscarriages. “Kids today are exposed to way more than I was in my Gen-X upbringing,” Joanie said. “My four-year-old knows more about death, racism, and sexism than I did in middle school. I wanted to musically include important themes in an accessible and appropriate way for all ages and genders.”

Over the course of 20 years, Joanie’s career has evolved from “adult” solo performer to bandleader of the popular Joanie Leeds and the Nightlights, back to solo – as part of the adult duo Joanie and Matt (with Matt Check) as well as playing for younger audiences. “I have always written all my own songs and brought the tunes to the band to arrange,” Joanie said. “The finances for making an album, publicity, marketing and paying musicians per show, that all falls to me.”

Organically, her shows remain “Joanie Leeds” with rotating backup musicians. “The process isn’t much different now, except I am trying to consciously hire more women, something I’m guilty of not doing in the past,” she confessed. Joanie recently came to terms with the all-male structure of the Nightlights. If one of her band members was unavailable for a gig, they would recommended a friend as a substitute. “It was problematic that I never questioned all of their recommendations being male,” she continued. “I was usually in such a hurry to find a replacement, there wasn’t time to be picky. My thinking has evolved. I’d like to serve as an example for other bandleaders by hiring more women.”

Joanie had planned a big release party for “All the Ladies,” but the real world rudely intruded. Her online All The Ladies Music Festival provides an alternative that even allows more participation by the musicians. “Before everyone knew the devastating impact of Covid-19, my environmentalist brother told me what the economic impact would be and that I should stop traveling and prepare,” Joanie said. “But I didn’t believe him until my album launch concert at the Childrens Museum of Manhattan was canceled.”

Joanie’s brother pressed her to find a way to create income immediately. As a single mother without a full-time salaried spouse, Joanie knew she had to take action right away. “I didn’t really have time to sit, wait, and see what happened,” she said. “I felt panicked at the start. Once my tour was canceled, more than half of my income evaporated. I had to act quickly.”

In response, Joanie started a subscription service called Quarantine Kids Concerts (on Facebook). “I was one of the first children’s musicians to offer this sort of program for children, which initially translated into an influx of members,” she explained, “but signups tapered off, as more performers jumped into the marketplace. The insulting government payout amount isn’t going to cut it for most freelancers, especially city dwellers with large rents and overhead. Plus it’s not going to arrive until May.”

Joanie conceived of the Quarantine Kids Concerts the evening of Wednesday, March 11. “The idea kept me awake all night,” she laughed. “By Thursday afternoon the next day, my business plan was finished and I started with social media outreach.” Timing was paramount – a day or two later, a sizable number of kindie folks began offering similar services. “Whether they’re free, or donation-based, or through a subscription service, we are all trying to find a healthy balance of what feels good, what our family’s specific needs are, and what we offer to the community,” she added.

“All the Ladies” hold special significance because it’s the first recording where Joanie’s daughter was an active, willing participant. “I don’t have much choice in the matter now,” Joanie said. “She asked to be on the album and I was happy to include her.” Joanie’s daughter’s voice appears on the songs “Anything” and “RBG.” “I’m thrilled to have this recording for posterity,” she added. “Years down the road, she can look back and hear her sassy four-year-old self! As a mom, that is really special.”

Click on the link for more information on the All The Ladies Music Festival on Friday, April 3, from 12:30 PM-4 PM, when Joanie wraps up the show. “All the Ladies” is available the same day from Amazon and Apple Music. 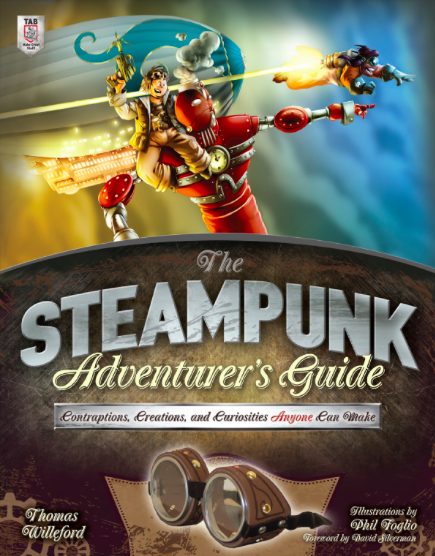 Get Suited Up! — The Steampunk Adventurer's Guide