Ray: Every issue, including Harley Quinn #69, is a toss-up with a run like this, where Sam Humphries and occasional guest writers send Harley careening from one chaotic plot to another. Most further the ongoing subplot of Harley dealing with grief and trying to keep her family together, but not Harley Quinn #69.

Instead, Mark Russell delves into one of the most bizarre mysteries of his run – namely, a take on the Bernie Madoff scandal as filtered through McDonald’s mascot characters. It picks up with an aged criminal named the Hambezzler being released from prison after three decades for a massive theft of the McGobble’s pension fund. He’s seeking a fresh start, and Harley – confused on how to do her taxes – hires the disgraced embezzler. That puts both of them in the sights of Hambezzler’s vengeful former coworkers, who have never forgotten their grudge and are looking for revenge.

It takes some suspension of disbelief to take this story seriously – even in the DCU, the concept of mutated fast food mascots, one of whom has a cheeseburger for a head, is kind of ridiculous. But underneath that absurdity is a surprisingly dark tale of corporate evil, betrayal, and the working man turned against each other.

It’s definitely in line with Russell’s brand of political writing – it’s very broad at times, with villains that seem like hissable parodies. But Harley taking everything in stride and coming up with themed threats for all of the characters is hilarious, and the ending has a strong note of redemption. This is very much in the vein of Russell’s past “Catgate” issue of this title, the one that got all the right people worked up about their portrayal. But he’s on to bigger and more powerful targets with this issue. Even though the execution isn’t quite up to Humphries’ level, is there a better title to tell ridiculous stories like this? 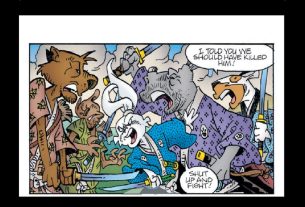 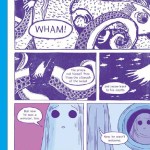