Cosplay Family Spotlight is a new recurring segment where I interview and spotlight a cosplay family. This week, I interview Avalyn Cosplay. I’ve met Avalyn Cosplay at several conventions and have seen her amazing daughters in costume. They are always a crowd favorite! Interested in participating? Leave a comment here or reach out to me on twitter @billythebrick.

GeekDad:
How many members of your family are involved in cosplay?
Avalyn Cosplay:
Cosplay is a mother-daughter activity in our family. My daughters (age three and one) have been attending conventions with me in homemade costumes since they were three months old. My husband doesn’t dress up, but he helps not only by carrying the girls around convention halls but also by taking them on weekend field trips so they are not underfoot when I need a day to focus on building, sewing, and painting things.

We also have two “aunties” who join us, SmallRiniLady and Netherjade Cosplay. Sometimes we coordinate our outfits and or they just hang out with us at a convention and wrangle toddlers. They are a HUGE help!

GeekDad:
How did you and your family get into cosplay and prop/armor making? Did one particular member start it or did you all jump in together? What was your first cosplay?
Avalyn Cosplay:
I studied costume design for theater in college and started making my own Star Wars costumes back in 2001. I loved all of Padme Amidala’s elaborate costumes, but my first hand-sewn costume was Arena Battle Padme. It was my first major sewing project, and I ended up making it about three times before I was happy with it. I would say that was my first “cosplay” even though back then we just called it “costuming.”
GeekDad:
Do you have a favorite cosplay of yours? A favorite group cosplay you’ve done as a family?
Avalyn Cosplay:

It is hard to pick a favorite but my most recent costume, the Aion Wizard, is really fun to wear because it feels magical and glamorous, and I love my light-up dragon spellbook.

As a family, one group we have done together (along with auntie Netherjade Cosplay) is Street Fighter. I have sewn three different Chun-Li costumes by now, plus Sakura, and Rose. My three-year-old loves being Chun-Li at the same time as her auntie.

GeekDad:
Speaking of group cosplay, do you always try to cosplay together? Or do you all do your own thing?
Avalyn Cosplay:
I’ve found it very difficult to cosplay at the same time as my kids. It’s usually me or them, not everyone because they are young and need constant attention. Have you ever tried to carry a small child while wearing a Worbla breastplate? Nope, not going to happen. I usually plan one solo cosplay day for myself where Grandma takes the kids for the day, so I can wear my most elaborate armored costume, spend time doing photo shoots, speak at a panel, and network with other cosplayers. On another day I will focus on the kids (or just bring the oldest), and I might not even dress up that day, letting my daughter take the spotlight and run around seeing the convention at her own pace. If I dress up on the same day as my toddler, I make sure that Daddy or Auntie is spending the day with us too, and I dress comfortably in a costume that resembles normal clothes, like a Pokemon Go Trainer. Also, if my kid has a prop there is a good chance that I will end up carrying it most of the day, so I won’t be able to bring my own props at the same time.
GeekDad:
Do you have a favorite piece that challenged you?
Avalyn Cosplay: 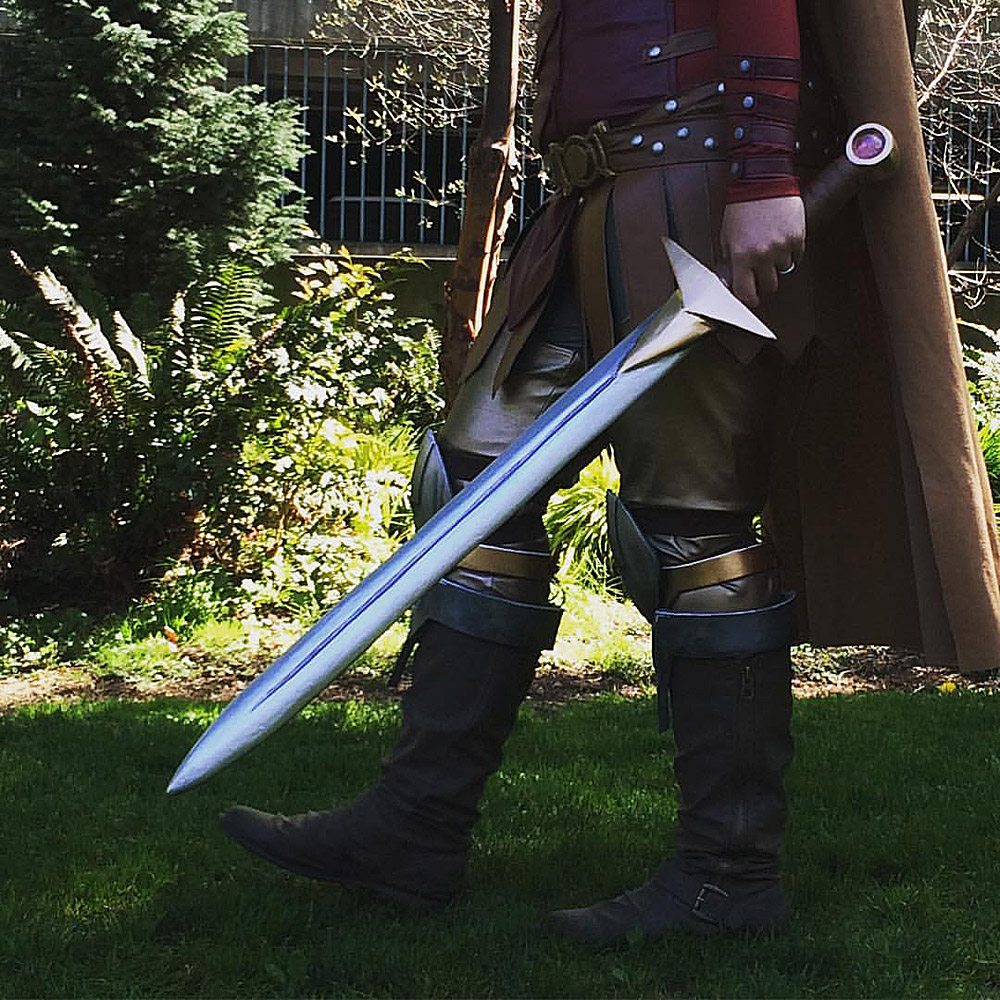 My Amazonian warrior sword for my Donna Troy (aka Wonder Girl) cosplay was a challenge to make. Originally, I had planned to make it out of balsa wood and Worbla, but the convention I was going to attend required all props to be made from foam. I ended up carving the sword out of blue insulation foam, and I coated it with Aqua Resin for durability. It is super light-weight and has survived several convention days and a road trip, only suffering a couple of very tiny dings that are easy to patch. A simple sword is a great cosplay prop because you can tuck it into your belt (or sheath it) when you need your hands-free, and it is easy to pose for photos with it too!
GeekDad:
What’s your favorite “medium” to work in (sewing, EVA foam, resin casting, etc.)?
Avalyn Cosplay:
Sewing is the cornerstone of my costumes, but I also like to work with Worbla. I’ve found that as I learn new skills, I gain a better understanding of what material is going to be the right one for the job. So now most of my costumes are mixed-media projects that incorporate sewing, plastics, and foam. Even the toddler costumes use some foam and Worbla elements, as needed. But sewing is the easiest and fastest, so I’m always looking for new sew-centric costumes I can whip up in a weekend, like the Pokemon Go Trainer and the Mustafar Padme Amidala maternity dress.
GeekDad:
It’s been awhile, but I used to do quite a bit of scale model building and I see a lot of similarities in techniques between small-scale building and prop and armor building. Have you ever done any scale modeling or smaller scale builds?
Avalyn Cosplay:
No. I do my costume and prop-building all free-hand, whether it is adult-sized or toddler-sized.
GeekDad:
Most of our readers are parents and, like me, want to share their geeky interests with their kids. I’ve been doing father and son cosplay with my son since he was born. Do you have any suggestions on how parents can get their kids interested and involved with cosplay and fabrication?
Avalyn Cosplay: 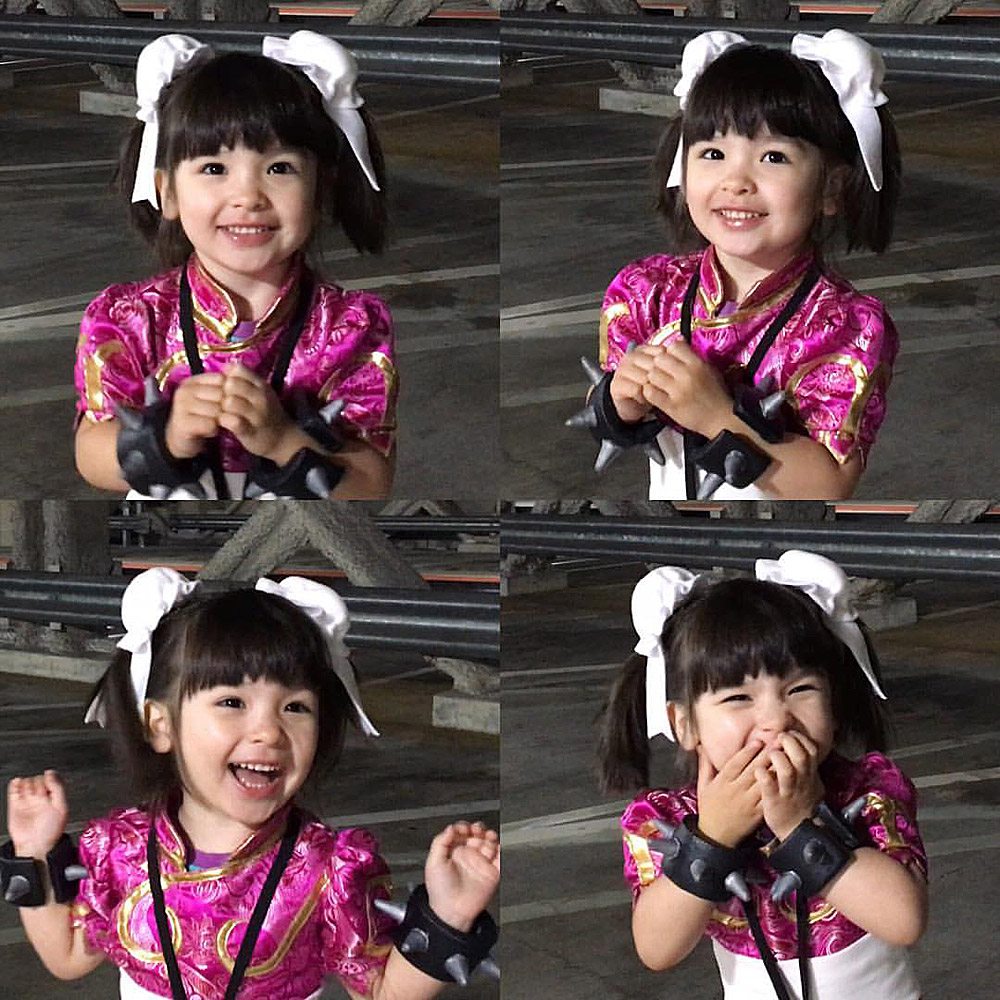 Make it fun and exciting! Don’t force it. Teach your kids about the characters first. At age two, you can teach them simple poses like “raise your hammer!” or “fish face!” and by age three they can learn one-liners to help them get into character and interact with others. There are so many skills involved in cosplay. Let them learn at their own pace and embrace the things they gravitate to, whether it is modeling and photography, acting, sewing, painting, gluing, drawing and design, etc.
GeekDad:
As someone who is somewhat local to you, I’d love to come and hang out in your shop and learn from some pros, and I’m sure I’m not the only one. Have you ever thought about opening up your shop and doing any sort of classes or workshops to do some hands-on teaching?
Avalyn Cosplay:
My “shop” is my home, which is currently a disaster zone run by two toddlers, so it’s not a great place for hosting classes right now. I prefer to teach in panels at conventions or mentor one-on-one, which is how my friend Netherjade got started doing cosplay over the past year. She was able to come over and learn to sew on my machines, and now she has her own sewing machine and is making costumes and props by herself.
GeekDad:
A lot of us geeks would love to do something we love as a full-time job. Do you have another job besides cosplay and prop making? If so, what is it? And do you have any tips for our readers on how to work towards a passion becoming a full-time career?
Avalyn Cosplay: 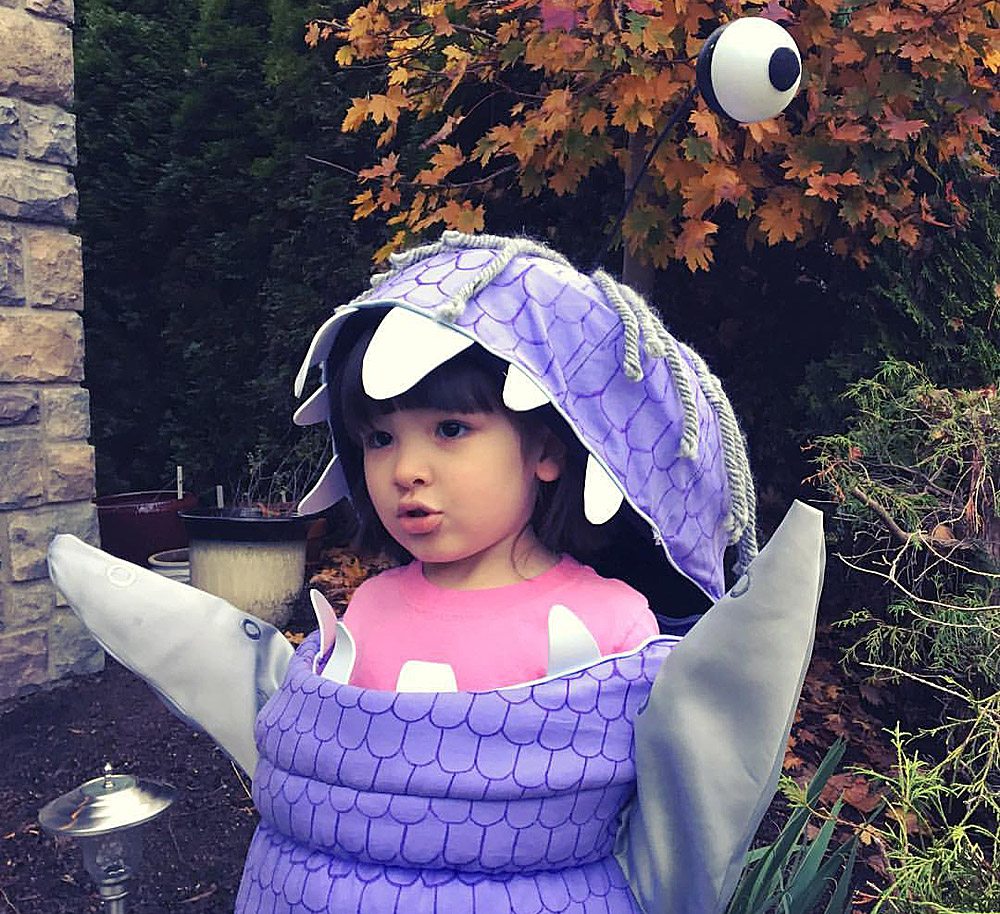 I actually quit my day job as a tech analyst a couple of years ago so I could take care of my kids full-time. I’m not trying to have a career right now, but I do what I can to minimize the cost of maintaining my hobby. If you want cosplay to be a full-time career, you need to specialize in a unique aspect of cosplay and offer something new and exciting, because cosplayers are a dime a dozen. If one thing doesn’t work, try something else. Write a book on your specialty, start a Patreon, stream videos, and start leveraging social media right now.
GeekDad:
Something along the lines of “Being a geek isn’t about what you love but how you love it,” is sort of the new geek mantra. Do you have anything, besides cosplay, that you consider yourself a geek about?
Avalyn Cosplay:
I used to be a huge Star Wars geek back in the ’90s. I’m still a fan, but that’s really how I established myself as a nerd. I was the “Star Wars Girl” in middle school, and I owned it. I also geek out about singing; I can sight-read music and make up harmonies on the spot, and I know a bunch of classical choral pieces like Bach’s “Magnificat,” Handel’s “Messiah,” and “Lacrymosa.” I also play guitar and piano and the Irish Whistle a little bit.

My kids are too young to really be labeled geeks, but the oldest really loves characters. She’s only three but she can name Disney characters from most of their movies and she knows a lot of DC and Marvel characters and Star Wars characters too.

GeekDad:
What upcoming conventions do you have on your schedule that people could see you at?
Avalyn Cosplay:
You can usually find me somewhere at Emerald City Comicon, PAX West, and GeekGirlCon every year. Check my Facebook page to keep up with where I’ll be next and whether I’m speaking on a panel!