Ray: I don’t know what I was expecting in Deathstroke #50, the grand finale of Priest’s fifty-issue superhero noir epic, but a stealth tie-in to Tales from the Dark Multiverse wasn’t it. The mystery older, evil Slade who has been plaguing the title for several issues and has taken the life of multiple characters including Rose’s husband Hosun is finally revealed – and he’s not from this world.

Apparently he’s from a world where he turned on his own children and has waged a solo battle alongside his newest recruit Damian Wayne. I would quibble that Damian would never kill his allies, but I can’t say I’m sure of that given recent events. This segment is genuinely creepy, as we see just how cold and ruthless this version of Slade is. When the two Slades finally face off, you can cut the tension with a knife. Our Slade may be a terrible father and a worse person, but he has multiple lines he won’t cross, and you can tell he’s genuinely disgusted by what his doppelganger has done. And he’s far from the only character who has crossed the line a few times in this run.

After the last few issues, I wasn’t sure if they were going to be able to walk back just how far Jericho has gone. This issue closes out that storyline with a great scene involving Jericho and his former lover Dr. Isherwood. These are two morally ambiguous characters with lots of regrets, and their final scene together packs a level of emotional devastation that’s very rare to see in superhero comics. This double-sized final issue delivers on almost every level, finishing up some characters’ storylines with finality and sending others onto the next adventure. It whiplashes all over the place in mood, delivering some of the most brutal scenes in recent DC Comics and then turning around to deliver a scene of hope in the epilogue. Can Slade actually change? Does he want to? Priest doesn’t quite answer these questions, and I don’t know that I’d want him to. What we get is a fascinating tale of an antihero whose greatest victim is often himself and those closest to him. Now that it’s finished, it’s destined to go down as one of the greatest longer DC runs in memory.

Corrina: Like so much of Priest’s run, Deathstroke #50 can be hard to follow, given how many elements it juggles and tries to conclude in Priest’s long-running story. But, also like so much of Priest’s run, this conclusion is well worth the time and effort. So many times, I feel as if plot elements and character developments can be seen coming easily when I read stories. But that’s never been the case with this series and yet everything has been foreshadowed so it all makes sense.

The two Slades were confusing but, hey, if Batman’s current run can be based on an alternate universe Thomas Wayne, why can’t the second Slade be from an alternate universe? It’s almost as if Priest is tweaking the concept of his fellow creators. Certainly, the pages of the Dark Multiverse Slade defeating the Titans calls back to the Marv Wolfman/George Perez Teen Titans confrontations.

I’m also reminded of Slade and Gar’s conversation at the end of Wolfman/Perez’s “The Judas Contract” with the coffee shop scene between the two Slades mirroring the original. The artistic choices for clothing are interesting, Dark Slade all in black, even the eyepatch, a rigid neck brace (to signal mental rigidity as well as armor?), while Slade is still wearing a white eyepatch, a lighter shirt, and with flowing hair, perhaps to signal some less rigidity of manner? But so much else is alike, too.

What this series has truly done is explore Slade’s capacity for evil and his capacity for good and concluded that the former is almost endless while the latter is severely limited by his upbringing and experiences. And yet, there’s something in there that allowed Wintergreen to trust him, there’s something of love there that makes it impossible for Slade to completely forget his children.

That comes to the ultimate conclusion in the page where Slade confronts his darkest self. As for the ending? It almost seems like Slade has to force himself to be a decent person because he knows the people he cares about–in as much as he can care–need him to be that for a while. When it’s clear that his family, such as it is, is recovering and will be all right, well, Slade isn’t needed anymore.

He can be Deathstroke now, as he wants. Or needs. 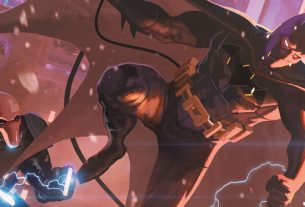