Ray: I’ve had my issues with Tom King’s Batman run for a few months now, but I’m happy to report that he does stick the landing in Batman #85 with a strong final issue that calls back to the run’s best moments.

Once again, he plays with the format as each scene alternates between a moment in the fight between Bruce and his deranged alternate father and a flash-forward to an event that happens in the aftermath. The confrontation between Bruce and Thomas, while probably my least favorite part of the issue, brings an end to this story effectively. It wisely doesn’t portray Thomas as some sort of unbeatable warrior (like the run did earlier with Thomas taking out the entire Bat-family singlehandedly), but rather a crazed man whose most dangerous element is his unpredictability. He can’t keep himself from ranting about his plan for Bruce, and that opens him to a satisfying defeat at the hands of Batman and Catwoman.

The other half of the issue, the flash-forwards, is easily the stronger part. King manages to catch up with every major player, including a powerful scene with Gotham Girl and Batman (although I think her recovery was a bit rushed).

Chuck Brown, aka Kite Man, gets the chance to catch up with Bruce in a bar as it seems the former Z-list crook has been through enough and is turning over a new leaf. This strange character arc has been one of the best parts of the run. There’s a fitting tribute to Alfred, and a great reunion between the two big bads of the run that makes clear who ultimately comes out on top.

But of course, it’s Batman and Catwoman who have been the heart of the run, and them renewing their love in the aftermath is the most satisfying part. There are no easy answers for them, and the question of marriage is danced around in a funny way that reflects DC’s likely hesitance to let it happen. But there’s a beautiful symmetry to this issue that perfectly puts a bow on this messy but fascinating run.

Then it’s a complete change of pace for a three-page preview of James Tynion’s run, as Guillem March tells a Joker story that shows how Superman’s identity reveal has the potential to upend this dynamic. It’s an intriguing teaser for what comes next in January. 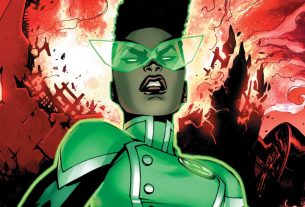