Ray: Marc Andreyko is wrapping up his run on Supergirl next month, so Supergirl #36 is his next-to-last issue. He’s essentially had to spend the entire time tying in with various events much like Sterling Gates did years back. First the Rogol Zaar saga, then Event Leviathan, and now Kara’s infected with the Batman Who Laughs’ plague just in time for the creative change-up.

So Supergirl #36 is mostly setting up Kara’s arrival at the fortress, then repeating the events from Batman/Superman, and then showing us some immediate aftermath. Based on that, there’s only so much he can do with the story but it’s overall effective at filling in the blanks. The staging event is the retro Brainiac who burrowed into the fortress and seemingly destroyed Kelex in recent months (not a great few months for superhero’s butlers, it seems). When Kara gets into a battle with the creepy robot, she fends him off and is eventually alerted to the bigger battle going on in the fortress.

The middle of the issue is basically a repeat of the segment from the other comic, just from Kara’s perspective with her being confused by why Hawkman and Donna Troy are suddenly evil. Her decision to grab the batarang is still impressive, but this new perspective doesn’t really add anything.

Andreyko then gets to explore what Kara is like Jokerized for the first time, with the faux Brainiac being her unfortunate first victim. The characterization of these corrupted heroes is all over the place, with Kara appearing far more jokey and sarcastic than any of the other heroes. She seems to be enjoying it, which takes a bit of the horror out of the whole thing. I think, much like with Shazam, the real terror of this concept is going to be what a teenager with near-infinite power and a corrupted mind can do. It’s a good setup, even if the writer isn’t really allowed to flesh it out into an independent narrative.

Corrina: When a series basically exists to fill-in the blanks for other big events for the DC Universe, it’s a pretty good indication how editorial views that series. Not as a showcase for Kara but simply as a way to tie a popular character into other events where Kara is only part, not all, of the story, just as Supergirl #36 ties into an event headed by other characters.

And so Kara’s characterization has suffered, as has any stability in her supporting cast, which is so important in establishing a series. Andreyko has had some great moments with Kara but he’s also veered into a dark, almost Black Label tone that also seems to be infecting so many regular series DC books lately.

Which is to say that I want to recommend this series to Supergirl fans but, really, there’s nothing that focuses on her story that would draw them in. Given the character is the star of a popular CW series, that’s a shame. 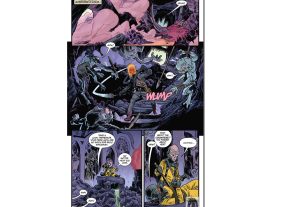