Writer-Artist Kirk Scroggs is making his DC debut with The Secret Spiral of Swamp Kid, an inventive journal-style original graphic novel. Kirk was kind enough to answer a set of questions about this original project introducing a new kid hero to DC’s stable, so look below the review for those!

Ray: The DC Kids line has been taking as many chances as the older-skewing teen books, reinventing DC characters as kids and teens and updating them for the modern age. The Secret Spiral of Swamp Kid, an inventive journal-style OGN from writer-artist Kirk Scroggs, is a first for them, though – it features an original character tied to the legacy of a DC icon, but it’s very much its own story. It’s also spinning out of one of the most unexpected sources – the horror-filled, Vertigo-accented world of Swamp Thing, most associated with mature-readers stories.

This isn’t Alec Holland’s story, though – it’s the tale of one Russell Weinwright, a Houma preteen navigating the challenges of middle school and being a half-boy, half-plant mutant who was fished out of the bayou one day. You know, just your ordinary kid problems.

Russell is an appealing character, very much in the vein of everykid characters from hit series like Diary of a Wimpy Kid, Middle School: The Worst Years of My Life, and the iconic Captain Underpants and Dog-Man series. The journal format is wildly popular in kidlit and DC does a good job of fusing comic book mythology with the first-person perspective. We’re introduced to the characters that populate his world – his loving adoptive parents (an interracial marriage between a black woman and a Jewish man, in a nice touch of diversity), his tomboyish best friend Charlotte, his over-eagery friend/journalistic stalker Preston, his school bully, and his creepy and strict teacher who may have a hidden agenda. The fact that Russell is green and has strange plant-based superpowers is just part of the story, and the way it’s treated as a fact of life provides some great comedy.

The Secret Spiral of Swamp Kid has a good balance of action and comedy, with much of the opening segment focusing on Russell’s everyday challenges as he sarcastically recounts them in his journal. For a power set that’s usually portrayed as horrifying, Kirk Scroggs manages to find the humor in them. Scenes like Russell using an extending vine to win a race are the kind of perfectly ridiculous stuff a kid would do if he was part swamp monster. But there is a larger threat building, as Russell finds himself having strange memories of the swamp, tied to a mysterious monster he sees in his nightmares. These strange trances happen at key moments, either causing him massive problems – or giving him strange bursts of energy that hint that he’s barely begun to tap his powers.

There’s a bigger story here, and it’s not too big a spoiler to say that, yes, it does involve the mystery of Alec Holland and the fearsome Swamp Thing. The segments in the swamps surrounding Houma are very different in tone from the rest of the book, and the looming threat of Anton Arcane adds some real tension to the last act. That considered, it feels like the final battle – set at a key football game and involving an unlikely transformation – may be a bit too absurd and silly given the mythology surrounding it. I don’t know if Swamp Thing fans will find it an ideal next step for the mythology, but I do think its intended fans will love it. The journal format suits the story very well, as Russell slowly unravels the mystery surrounding his appearance in Houma and gets closer to the truth.

Those looking for full answers here probably won’t be satisfied – Russell’s story is a mystery, and it’s one that doesn’t get resolved by the close of business. I’m not sure if there’s a second chapter coming, but I hope so – it feels like Russell Weinwright is one of the most unique new characters to be added to the DCU in a while, and the odd town of Houma is a location with a ton of potential. It’s a corner of the DCU where the surreal and supernatural is the everyday, and a boy with a mutant plant-frog living on his arm is just a part of the student body and no one has a problem with it. That in and of itself makes The Secret Spiral of Swamp Kid a worthwhile read – it’s a rare look at a superhero world that may be kinder and more welcoming than our own.

1. Swamp Thing is one of the most iconic Vertigo characters with a background in eerie, mature-readers comics. He even mentions that in the book! What about the character and his mythology drew you to him as the roots for an all-ages story?

As a kid I was really drawn to tragic, monster characters like Frankenstein, King Kong, and Swamp Thing. They’re all kind of big misunderstood softies at heart. It was a lot of fun using Russell, an eighth-grader, to chip away at Swamp Thing’s tough guy exterior and kind of convert him into a mentor figure. I also always appreciated the chance, as a kid, to experience scary stuff that was fine-tuned for kids– Ghostbusters, Monster Squad, even the Goosebumps books. Kids love to be scared!

2. “The Secret Spiral of Swamp Kid” has a great sense of place – both in the culture of Houma, Louisiana and in the eerie bayou surrounding it. Do you have any background in Louisiana that helped you in capturing that authentic feel?

Believe it or not, with the exception of me, most of my family lives in Lake Charles Louisiana! We originated in Texas, but somehow gravitated to the bayou. I love Louisiana, especially the gnarled trees and the Spanish moss. Using those moody, mysterious locales was a real treat. I also tried to infuse Charlotte with some good ol’ Cajun flavor.

3. There were some clever literary references in this book, especially the extended sight gag involving The Old Man and the Sea. What books that you read in school inspired you in the way that one did for Russell?

I loved anything weird, spooky, or creative. Roald Dahl, especially James and the Giant Peach, really inspired me. That’s a dark book! And anything by Shel Silverstein. But mostly I was reading Mad Magazine and Tales from the Crypt. You know, great literature!

4. This is your first DC story, but it’s chock-full of references to past stories and superhero lore. What DC characters and stories influenced you the most when diving into this shared universe for the first time?

Well, being a huge Bernie Wrightson fan, I loved the original Swamp Thing. He’s like Frankenstein meets Superman. It was very important for me to get him in the story for an extended cameo. I definitely wanted to imply that the world Russell lives in is aware of Batman and Wonder Woman and the others. Not too much cross promotion, of course, but it’s a world of heroes.

5. The journal format is unique to the DC line so far. Are there any other DC characters you would like to see explored using this format – and do you have plans for any?

As a matter of fact, yes. I’m in the early stages of another story as we speak and I hope to make it in a similar format. It will be bursting with monsters, some of them plucked from the DC library of freaks.

6. Lots of potential for future adventures left in Russell’s story at the end of “The Secret Spiral of Swamp Kid”. Are there plans for a second installment, and do you have any hints for us about what’s to come?

We’ll have to see. I certainly would love to continue exploring the spooky swamps and dark water of Russell’s world. And he’s still got some unanswered questions weighing heavily on him. Like who is he? Why is he half shrub? What’s with his carrot finger? And why is there a frog living in his arm? You now, the questions that plague all of us! 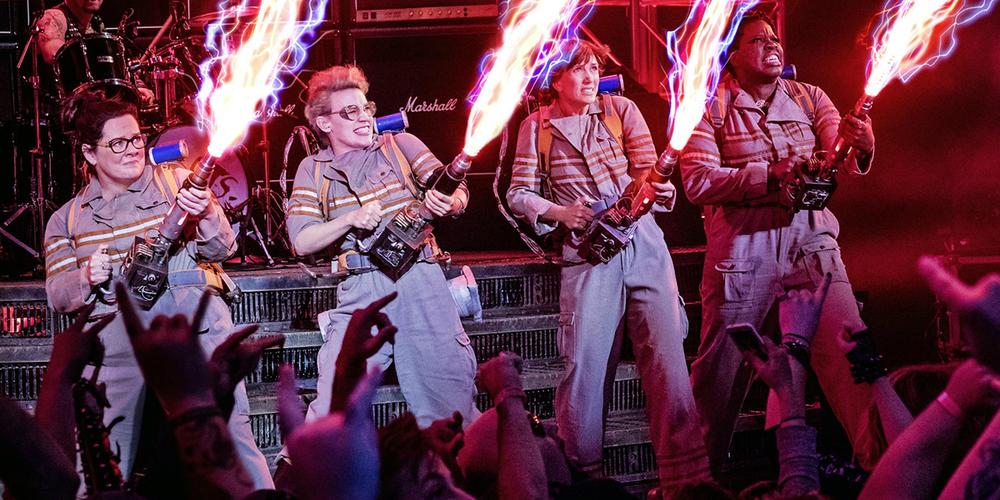 10 Things Parents Should Know About ‘Ghostbusters’ (2016)