Ray: Year of the Villain has come to Bludhaven with Nightwing #65, and it’s pitted Nightwing against one of his deadliest enemies – William Cobb, aka one of the few surviving Talons and his long-thought-dead great-grandfather.

This has added a new wrinkle to the ongoing Ric Grayson storyline, as it’s the first time Ric is pitted against a villain who knows him from his earlier life and has the advantage of Ric having forgotten all about him. Ronan Cliquet, who has done the art on this arc, has a great opportunity to showcase his skills this issue with a plot that’s dominated by a single fight on a Bludhaven rooftop, as Talon and Ric battle to a standstill and Ric tries to protect Bea from becoming Talon’s latest victim.

Talon is six steps ahead of Ric at all times, having fought him before and having those memories, but he’s also determined not to kill Ric but to turn him over to his side and convert him to the Court of Owls.

The dialogue in this segment, especially on Cobb’s part, is overly dramatic. He spends a lot of time monologuing about how Ric will fulfill his destiny with him and threatening to kill people but not following through. The same problem exists with the B-plot, which sees the three Nightwings still standing fighting to contain the riots running through Bludhaven while their fourth member lingers in a coma. They’re almost able to stop a riot at a clinic, but just as they appeal to the mob’s better selves Luthor’s “Doom” insignia appears in the sky overhead and makes the mob think it’s the end of the world.

This is a pretty broad comic without much subtlety, but it’s also fast-paced and delivers some great action. But the Ric Grayson story is set to come to an end in 2020, and it’s about time. Jurgens has done his best with the story, but the status quo has hobbled every writer who’s worked on it. 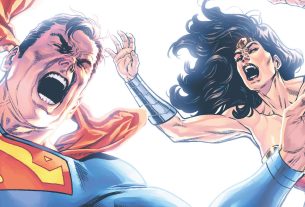