Ray: Over the eighty issues of Tom King’s Batman run, we’ve seen some patterns emerge – intimate, talky issues starring Catwoman; high-intensity one-on-one battles between Bruce and villains; epic flashbacks – and the one that recurs in Batman #80, Batman fighting his way through an army of villains as things seem bleakest.

After the interlude from the last two issues where Bruce and Selina recuperated on a tropical isle, Batman and Catwoman are ready to take back Gotham from Bane and Thomas Wayne, but first they’ll have to take down an army of Bane’s lieutenants. John Romita Jr guest-stars on art with legendary inker Klaus Janson, and he delivers some of the best visuals of the series in close-up fight segments. First Batman takes down Professor Pyg and Two-Face from behind a disguise, and Selina stops Mad Hatter from exerting Bane’s twisted “justice” on a random stray cat. We don’t see much of the heroes up close and personal for the first half, but their presence is felt.

What doesn’t work quite as well? There’s a lot of Thomas Wayne stalking around the city and insisting that his son is back, even as Hugo Strange insists that Bruce is broken. Thomas is a compelling villain, but he’s also sort of a scattered one. His actions towards his son were monstrous, but he suddenly seemed to display some regret about Alfred three issues ago and now he’s hesitant to hurt Damian and genuinely cares about Gotham Girl.

We know he’s going to make a face-turn by the end of the arc and probably wind up back in oblivion just like Jor-El, but unlike Jor-El he’s been taken so far that I don’t know if I’ll buy it. And still no word on or reaction to what happened to Alfred. But segments like Batman’s face-off with Hush, or the brief and thrilling segment involving Kite-Man, show King’s deliberate pacing at its best. With only five issues to go, I hope the resolution isn’t rushed, because King’s set up some fascinating stuff for the final showdown. 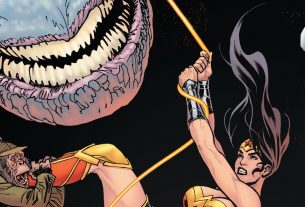