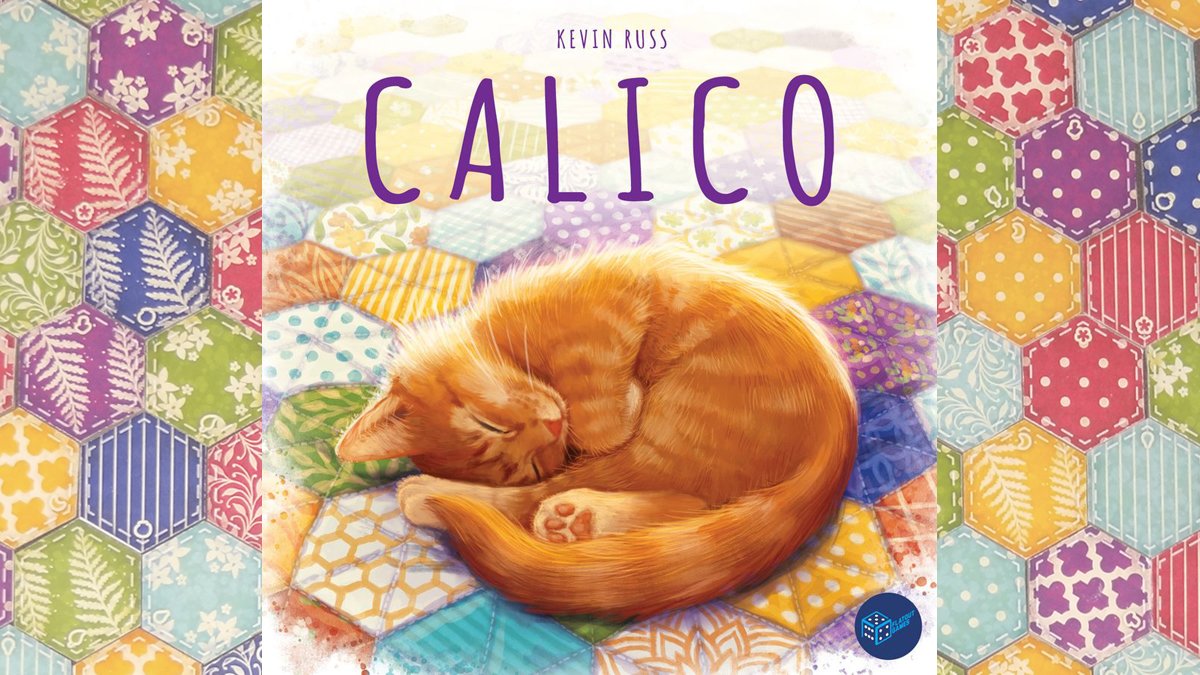 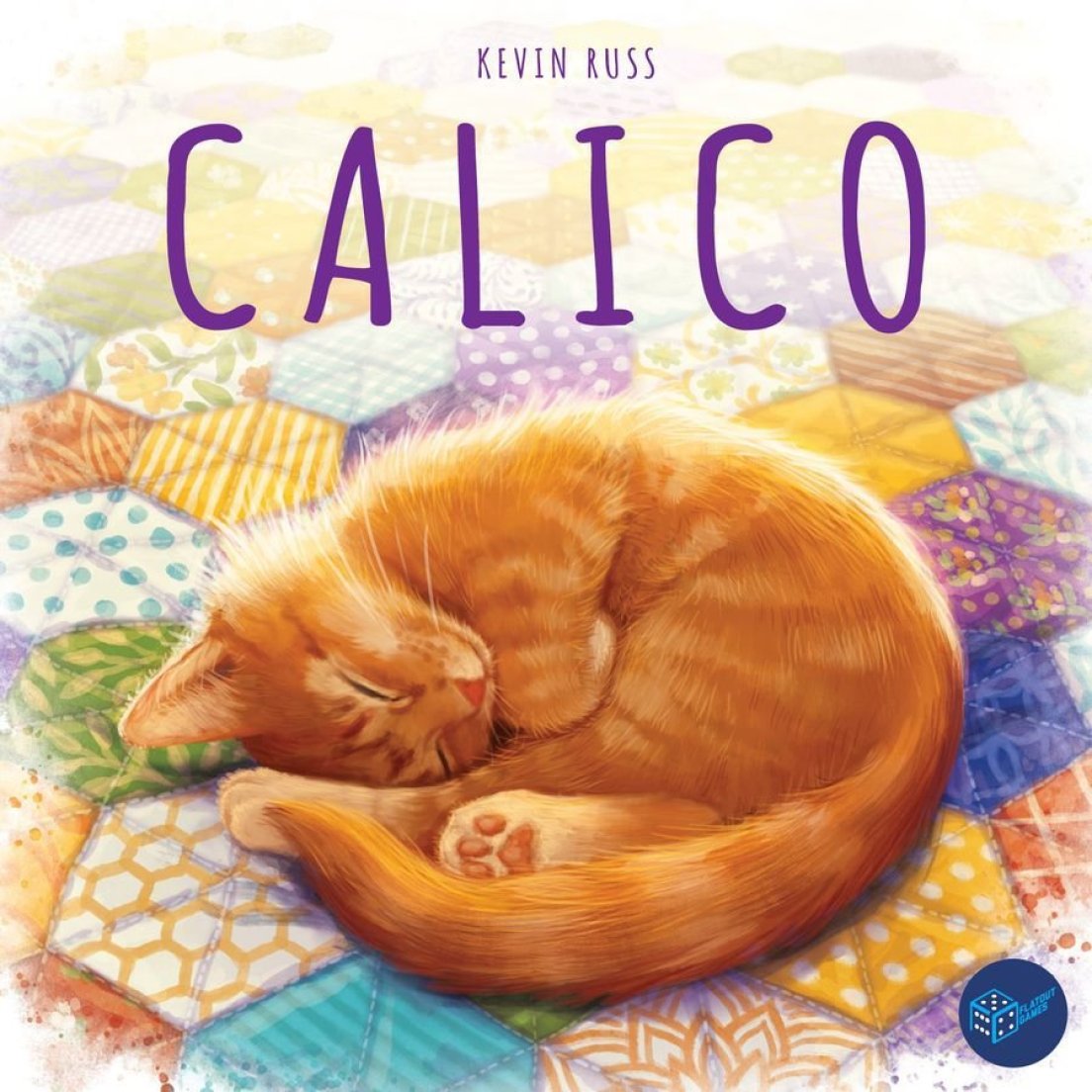 Round up your sewing circle—it’s time to make some quilts! Piece together colors and patterns to earn buttons and attract the attention of the friendly cats!

Calico is a tile-laying game designed by Kevin Russ for 1 to 4 players, ages 13 and up, and takes about 30–45 minutes to play. It’s currently seeking funding on Kickstarter, with a pledge level of $29 for a copy of the game. Although the game is listed at 13 and up, there are simplified rules for younger players as well; I was able to play with my 6-year-old, though some of the longer-term strategy can be difficult for less experienced players. There’s nothing about the theme that would prevent it from being an all-ages game.

The patch tiles are small hexagonal tiles, each in one of 6 colors and 6 patterns. Each tile has a small icon in one corner that also serves to indicate its color and matches the button shapes, though the icon is pretty tiny and can get lost in some of the busier patterns. There are three copies of each unique combination of color and pattern.

The button tokens are all fun shapes like water drops, mushrooms, and leaves—it reminds me a little of Lucky Charms marshmallows. Each color is associated with a button type, and there’s also a rainbow button (which we’ll get to later). The reference card isn’t entirely necessary: it just indicates that if you get 3 or more of the same color, you get a button, which is worth 3 points. One nitpick: why aren’t the buttons in rainbow order?

The cat tokens look like cats curled up and ready to snuggle down on a quilt. Each one has a point value on the back—there are multiple versions of some of the cats, worth different points, with slightly different sizes. In the final version, I’m not sure if the higher scoring cats will always be strictly larger—as you can see in this prototype, the 11-point cat is smaller than the 9-point cat.

The quilt boards themselves are dual-layered so that they hold all the patch tiles in place. The border isn’t just decorative, though: the colors and patterns along the outside edge also count toward matches as you build your quilt.

The artwork is by Beth Sobel, and the cats and quilt pieces are all colorful and delightful. The one complaint I’ve heard is that the cat on the cover illustration isn’t a calico cat itself, which may confuse some people, though I suppose the title refers more to the quilts than the cats.

How to Play Calico

The goal of the game is to score the most points by collecting buttons and cats, and completing your goals.

Each player takes a quilt board and a set of six goal tiles. Shuffle the goal tiles and draw four of them. Of those, choose three to place on your board (on the starting spaces shown) and return the rest of the goal tiles to the box. (For your first game, there are specific goal tiles recommended.)

Choose three cats to use—the cat tiles are double-sided, with different requirements and point values for each. Shuffle and distribute the six pattern tiles below the cat tiles so that each cat has two patterns below it. These are the patterns that the cats prefer. Place the corresponding cat tokens in a supply nearby.

Place the buttons and reference card in a supply.

Mix up the patch tiles face-down and form stacks for a supply. Give each player 2 tiles at random, and then turn 3 tiles face-up in the center of the play area as a market. You’re ready to begin quilting!

Turns are quite simple: on your turn, you place one of your tiles onto your quilt, and then draw one of the three face-up tiles. You may place your patch tile in any empty space on your board; once placed, you may not move a tile.

If you create a contiguous area of at least 3 tiles of the same color, then you get a button of that color to place on your quilt. (Note that each contiguous area will only earn one button; if you make one area of 6 tiles, you do not score a second button.) If you get at least one of each color button, then you also gain a rainbow button, which is worth 3 points.

If you create a contiguous area of a single pattern that matches a cat’s requirements, then you gain a cat token for your quilt. Some cats simply want a contiguous group of a certain number; others want a specific shape. Either way, the area must be one of the two patterns that the cat prefers—you can’t mix the two different patterns into the same area.

At the end of your turn, refill the market from the supply stacks.

The game ends when every player has filled their quilt board.

Buttons are worth 3 points each. Cats are worth the points shown on the cat tiles (and the backs of the tokens). Finally, you score your goal tiles.

Each goal tile shows a combination that’s required to score points, based on the six tiles surrounding the goal tile. For instance, AAAA-BB means 4 tiles of one type, and 2 of another type. You check each goal tile for color and pattern independently: if you get color or pattern, you score the lower value in the blue circle; if you get color and pattern, you score the higher value in the yellow circle.

Add up all your points: the highest score wins!

There are a few variants offered in the rulebook. The family variant does not use goal tiles—instead, those are turned face-down on the board and take up spaces, but you only score for buttons and cats instead. For 2 players, if you want a little less variance in the draw piles, you can take out one full set of 36 patch tiles from the supply before you begin. Finally, there is a solo variant: after you draw a tile on your turn, you also discard the oldest tile and then slide all the tiles over. There are additional solo rules in development now, so I didn’t actually try this one myself.

Why You Should Play Calico

Fair warning: although Calico has colorful buttons and adorable cats (and pretty simple instructions for your turn), it is not an easy game. It’s the sort of game that will make your brain hurt while you’re playing as you stare at your quilt and try to figure out which tile you need so that you can score a button and a cat and fulfill your goal tile. For some players, that brain-burning sensation is a good thing. If that’s you, then Calico is one you’ll definitely want to try. On the other hand, if you’re the type of gamer who prefers a bit more action and a little less pondering, then you might be allergic to these cats.

Things seem pretty simple at first: you place a tile, match up some colors, and score a button. Nice! Or you notice that you can start working on lining up some patterns to get a cat. Sweet! But then you start looking at those goal tiles, which are inconveniently spaced out on your board—you can only place so many tiles before you’re starting to surround them. Well, that’s okay. I can just place this tile here next to the goal tile, because I have plenty of time to figure out what else will go around it later, right?

That’s where it gets you. A few rounds later, you’ve gotten a few buttons and maybe a cat, and you realize that the one tile you absolutely need in order to complete your goal tile … has already shown up twice before, and you’ve painted yourself into a corner. Will that tile turn up before the game ends? And if so, will somebody else notice and take it before you get a chance?

Calico reminded me somewhat of Sagrada, another puzzle-like game that can have you scratching your head as you try to line up colors and—in that case—dice values. While there is an opportunity to hate-draft in Calico, there’s often enough going on that you don’t have enough attention left over to see what somebody else is doing. It’s only when all three market tiles are equally bad for you that you might take a look around and see what your neighbors are doing.

That means that, to some extent, Calico can be a little bit solitary. Each player is working on their own puzzle independently, and the primary interaction comes in the form of “OH NO YOU TOOK MY TILE”—often unintentionally. I found that to be okay, though: it kind of fits in with the theme of several people sitting around and working on their own quilts, just enjoying each other’s company and occasionally admiring someone else’s work. (Granted, the theme falls apart a little when think about how these quilts are being assembled, and the fact that you’re randomly grabbing patch tiles from a shared supply, but don’t think too hard about that part.)

For a simpler game, you just turn the three goal tiles face-down, and score only for cats and buttons. That certainly makes it easier, but I think some of the delicious dilemmas come from trying to fit in the cat and button requirements around the goal tiles. If, for instance, you have the goal tile that requires all six tiles to be different, then you can’t score a cat or a button and still fulfill the goal with both patterns and colors—you’ll have to decide whether it’s worth the gamble, giving up an opportunity for guaranteed points for the chance at a big score for the goal.

There’s also an interesting economy at work. Each color and pattern is represented evenly in the patch tiles, but because some of the cats require larger areas to score, some patterns will become more valuable. That becomes important when you’re trying to decide which patterns to use to match your goals, because you don’t want to end up needing a pattern that everyone is after.

Overall, I’ve enjoyed Calico quite a bit. I think it will appeal to those who enjoy a good puzzle, and I like that the simple ruleset mean that I can play with my youngest daughter too, just ignoring the goal tiles and scoring buttons and cats instead.

For more information or to make a pledge, visit the Calico Kickstarter page! 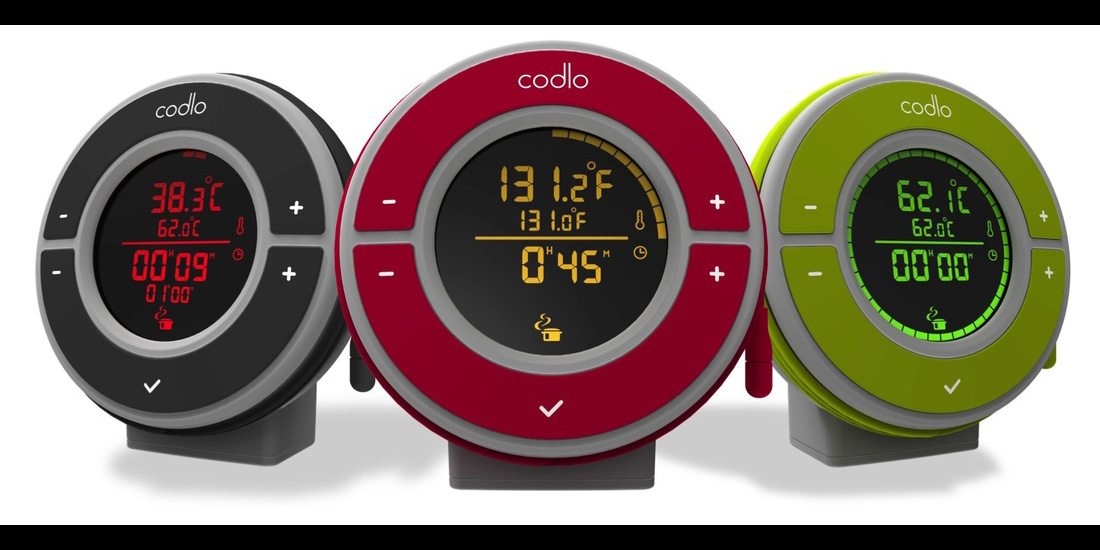 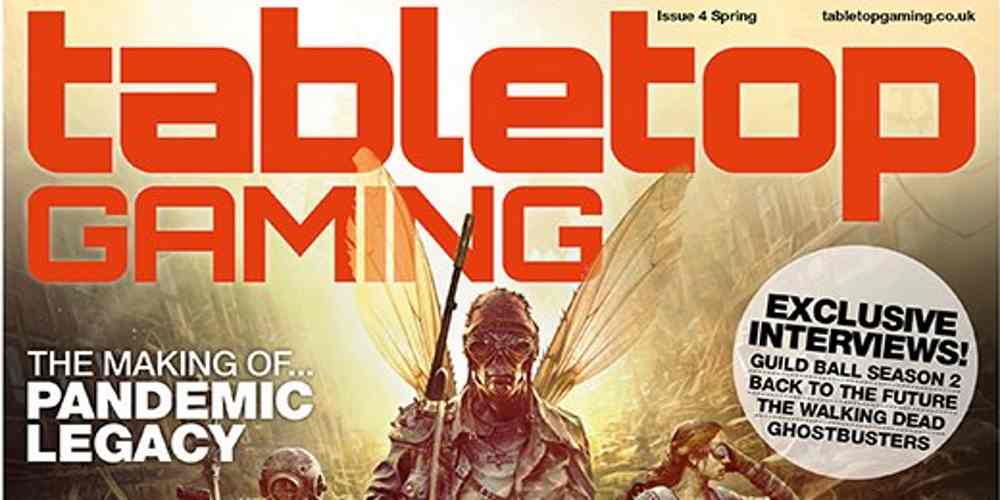 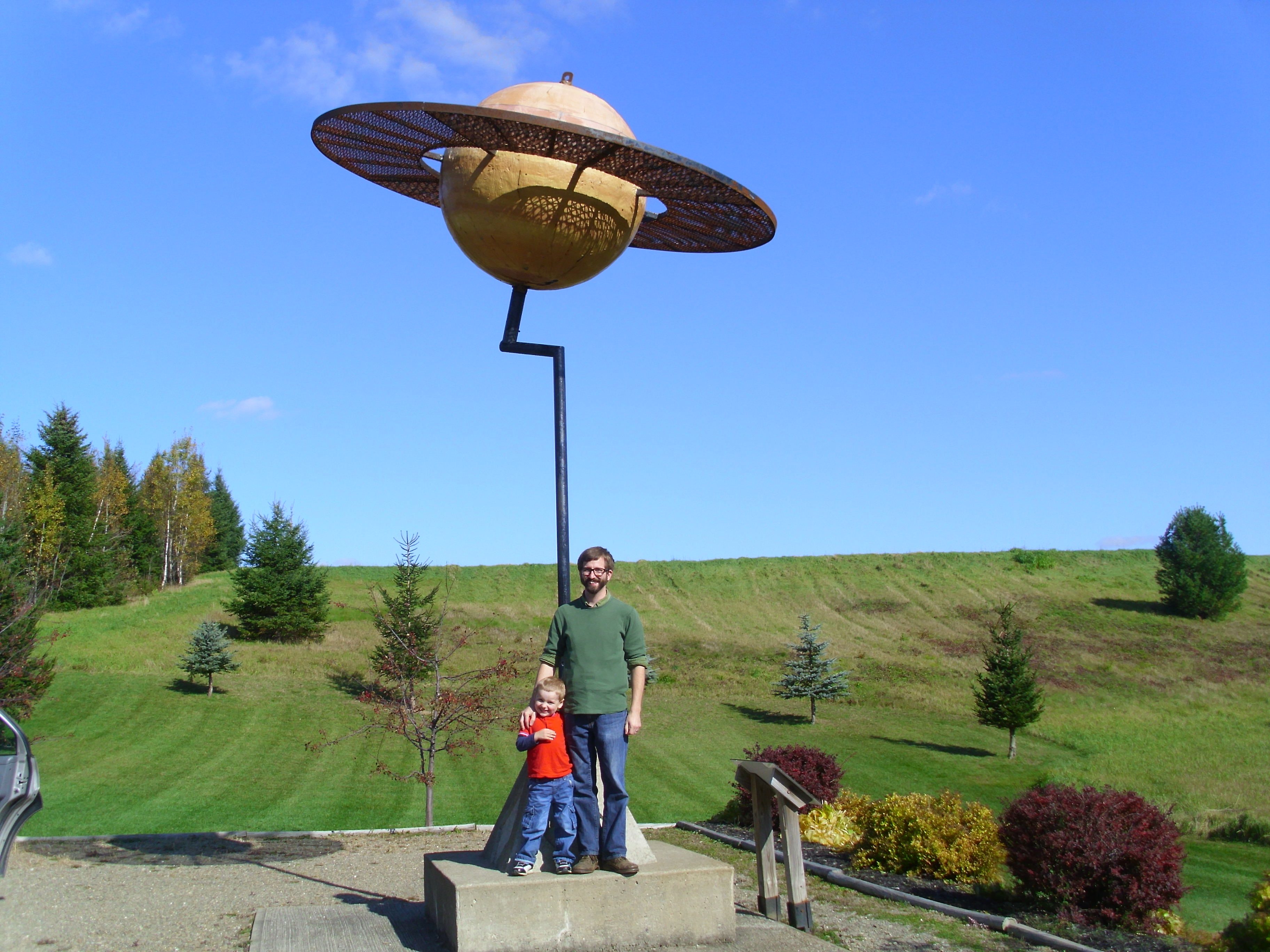