Ray: Dan Jurgens’ run on the Ric Grayson show has been helped a lot by the Year of the Villain tie-ins – no longer does he have to come up with reasons to keep Ric Grayson from exploring his past and getting out of Bludhaven. It’s hard to engage in self-discovery when a deranged zombie relative is stalking you, as in Nightwing #64.

When we last left off, the murderous William Cobb had essentially crucified young Nightwing Zac, who is clinging to life as this issue starts and the other Nightwings rush him to an understaffed hospital in the middle of a blackout. Meanwhile, last issue ended with Talon arriving at Bea’s bar, seemingly to threaten or hurt her. But there’s an intriguing swerve as he instead sits down for a beer to talk to her about her boyfriend. She’s starting to cue in that this patron isn’t quite right when they’re interrupted by a mob of rioters – every blackout Bludhaven goes from crime-ridden to full-on feral.

The action scene that follows is one of the best of this run, as Talon brutally dismantles the rioters with extreme prejudice. It’s also a bit ultraviolent for this book, with impalements and decapitations, and reminds me more of a noir thriller than a superhero comic. But it gets Talon’s threat level across effectively, and he immediately turns on Bea and abducts her as soon as he’s done.

That sets off a tense chase across Bludhaven as Ric and the remaining Nightwings race across the city to get to Talon before something bad happens. The chase is exciting, with Ric leaping on and off moving vehicles and battling rioters along the way. It’s a good action scene, but Bludhaven is kind of a ridiculous place. Why are these random people trying to kill superheroes? Because it’s dark out? It feels like a switch flipped and it’s murder time. This is an exciting and entertaining read, even if the tone is a bit off sometimes. 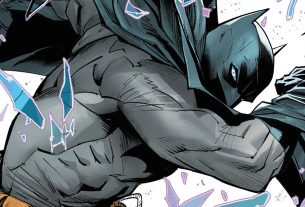