Ray: Harleen #1 is one of many upcoming Black Label projects featuring Harley and the Joker, I approached this story by writer/artist Stepan Sejic (who seems to have patched things up with DC after the troubled launch of Justice League Odyssey) with a little trepidation. Harley Quinn has evolved a lot as a character since her early days as Joker’s gun moll, and I want more of modern Harley rather than the lovestruck Joker-obsessed one. But Sejic pulls off a neat trick here – this is essentially a story of classic Harley told through the lens of an older, wiser Harley who looks back at her longer self with some degree of horror. It takes a bit to realize that the narration is told from the future, but it adds a different context to the whole thing and backs up the brilliant, beautiful art with a strong story of Gotham’s villains.

The opening, which finds Harley as a young research psychiatrist trying to secure funding for an experimental program to cure psychopaths, won me over with the inclusion of Dr. Shondra Kinsloving as Harley’s doctor friend. The victim of one of the most bizarre fridgings in comic history back in the Knightfall days, Shondra had a lot of potential as a character and I hope more is done with her here. I wasn’t as fond of the added backstory for Harley that she had an affair with a Professor in college and has been hounded by it ever since. While I did think Sejic nicely used her boss to assure us that Harley is competent and didn’t receive favoritism, it adds an element of repeated addition to powerful and unethical men that I don’t think speaks to what Harley’s evolved in.

What does work, very well, is this book’s take on the Joker. Surprisingly, since I’m not a fan of the character except in a few select versions, this story came closer to the Heath Ledger version than any in a while. The unpredictability, the constant shifting stories, and the chaotic charm are all in place here, and while this Joker is maybe a bit too “pretty boy” from what I’m used to, Sejic seamlessly shifts him from oddly appealing to terrifying in a single panel. The opening segment where Harley encounters a battle between Batman and Joker is brilliantly drawn, and the issue packs a lot of story into almost sixty pages. This might be the most dense Black Label book yet – surprising since Sejic is an artist by trade.

Another appealing element is how seamlessly Sejic works in the entire Bat-rogues gallery in this issue. We only see brief segments of some like Ivy and Riddler, but Sejic writes their dialogue perfectly. I was also intrigued by Hugo Strange as an Arkham overseer who manages the place with an iron fist, and Harvey Dent as a hard-nosed DA who wants to shut down Harley’s project. Harley’s dialogue is definitely more classic “Harleen” – it’s hard to see shades of the chaotic neutral character she’ll become, and she spends most of the issue locked in a state of anxiety and insomnia – hallucinating monster bats and clowns every time she closes her eyes. This is an artist showcase that turns into a surprisingly dialogue-dense book, and it establishes Stepan Sejic as one of the biggest multi-talents in DC’s stable.

Corrina: I cannot argue with the quality of Harleen #1. Sejic’s art conveys Gotham in his unique painted style, one with smoke, and confusion and fires, along with all sorts of danger and temptations. It’s the regular DC Gotham but it’s also Sejic’s Gotham.

The story is involving and this version of Harleen Quinzel is more down-to-earth, more normal than any we’ve previously seen.

But whether you enjoy this story depends entirely on what you want from a story involving Harley.

I loved Harley Quinn: Breaking Glass, the original graphic novel that’s part of DC’s Young Adult/Young Readers line, because it contained so much of Harley exuberance, her unique worldview, and yet also showed the characteristics like impulsivity and disregard of rules, that create trouble in her life.

This is not that Harley. This is the story of pre-Harley and the Joker’s doomed romance. It’s the story of a bookish girl intrigued by what she calls ‘the beast.” There are some hints that Harley harbors her own issues but the path this story is clearly going down is that the Harleen we meet allows herself to be corrupted by the Joker, and the Joker creates her alternate identity.

That makes me uncomfortable because, one, it’s always uncomfortable for me to read the Joker as a romantic interest. What Sejic is doing is showing what attracts Harley about the Joker first, making him into a somewhat romantic figure. Having the Joker craft and mold Harley robs her of the agency she had in Breaking Glass. This Harleen almost seems helpless before the Joker’s dubious charms.

I’m also uncomfortable with the statements in the book about how romance novels are pure fantasy that can cause trouble in reality. It’s a slam at romance novels in general, out-right stating they’re unrealistic and misleading to their readers and, well, I don’t have time for my knee-jerk “romance is a feminist genre” rant but the swipes taken at the genre annoy me. (Now, how much of Hollywood portrays romance–usually badly– is another thing altogether…) 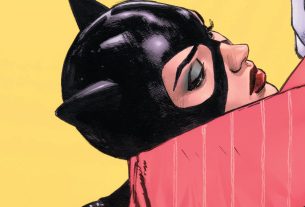