Ray: Tom Taylor writes one HELL of a post-apocalypse, and DCeased,  his zombie horror take on the DCU delivers its best issue yet in DCeased: A Good Day to Die #1, a side story focusing on some lesser-known DC heroes making their stand against the anti-life equation.

That’s because there’s a greater sense of uncertainty with B-listers, and also because the unlikely motley crew that forms this issue is equally compelling and hilarious. It starts with Big Barda and Mister Miracle returning to the scene of the ruined Apokalips and discovering they’re not going to find their answer there. They return to Earth, fight some zombies, and form an alliance with Mister Terrific, whose gear has protected him from being turned into one of the enemy. One thing that stands out about this issue compared to the main issue is that it’s a lot funnier, with dialogue that reminds me more of Taylor’s work on Marvel books than the dark and serious tone of his work on the Injusticeverse. But I wouldn’t expect anything else with Blue and Gold involved.

This issue is largely about using unconventional means to stop or turn back the apocalypse, and when Blue and Gold are involved you know time travel is too – but I wasn’t expecting Waverider to show up and play a major role in the story. The fusion of the cosmic and the gory is pretty seamless, but it’s another player who gets the best scenes.

John Constantine, as illustrated by iconic Hellblazer artist Darick Robertson, gets some of his best scenes since coming to the DCU as he deals with the zombie attack in ways only he can. Constantine’s mercurial, bitter contempt for the heroes of the DCU and the old-fashioned way they approach things is perfect for his personality, and I’m hoping this is just the start of Taylor using him in this series. There’s lighter moments, but there’s no question this is as dark as the main series – major players die, and don’t read this if you’re a JLI fan. But if you can stand the bleakness, this series gets better with every issue. 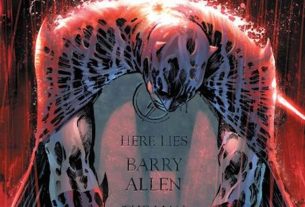