Ray: Much like Harley Quinn this week, this arc of Deathstroke has been all about death and unhealthy coping mechanisms. Of course, with the Wilson family, those coping mechanisms are far more destructive. Red Arrow (Emiko version) killed Deathstroke, and Slade’s children have reacted in different but no less awful ways. Rose turned her rage outward, determined to hunt down a fifteen-year-old girl and kill her – and not caring that both of them are being used as a pawn by Emiko’s mother. I’m still not happy about this whole storyline, especially Shado’s toxic characterization, but Priest actually manages to write it well and weave something great out of it. Jericho, meanwhile, seemed to have his head screwed on straight. He fought to stop Rose and nearly died in the process – only to be made an offer by Lex Luthor for more power and take it. Jericho’s not a villain, and he’s naturally suspicious of Luthor, but he’s desperate – and he believes lies he shouldn’t.

Jericho’s upgrade in Deathstroke #46 is one of the most impressive so far in “Year of the Villain”, and it’s not long before we see how it corrupts him. The story begins already in motion, as he’s kidnapped Emiko and trapped her in his head to protect her. That’s a running theme in this issue, as while Rose makes decisions out of grief and anger, Jericho makes them out of misguided benevolence. When he’s forcing Emiko into “protective custody”, it makes sense. When he’s manipulating his boyfriend with his new telepathy, it’s a lot more disturbing and shows how far he’s come. Characters like Wintergreen and Dr. Villain do their best to try to convince both of Slade’s children that they’re on the wrong path, but this is a story about a toxic cycle of violence and abuse that’s been building for decades. It feels like Rose and Jericho are on a collision course, and Jericho, in particular, may have sold his soul in a way he won’t be able to take back.

Corrina: There are glorious colors that greet readers at the beginning of Deathstroke #46. First, the green-edged scenes with Emiko trapped within Joseph, complete with the green letters in the narration boxes that represent Jericho, then a transition on page 2, a splash page with Jericho flying in space against the backdrop of the Earth itself.

But soon, that soaring effect moves down to Earth, as Jericho seems to crash headfirst, possibly freeing Emiko.

In between the soaring and the fall are the flashbacks to Joseph’s childhood, showing how he and Rose got to be who they are. It’s hard to model morality when your parents are black ops agents and adrenaline junkies. (And one becomes a killer for hire.) Joseph is so desperate for love that he forces it with his lover, so desperate for love that he’ll protect his sister, almost at the cost of Emiko’s personhood, though he says he’s doing it to protect all of them. Thus, he justified his response to Luthor as well.

The road to hell truly seems paved with good intentions for the Wilsons. 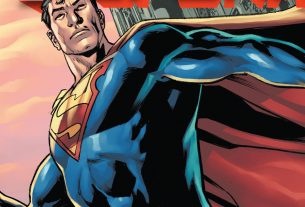