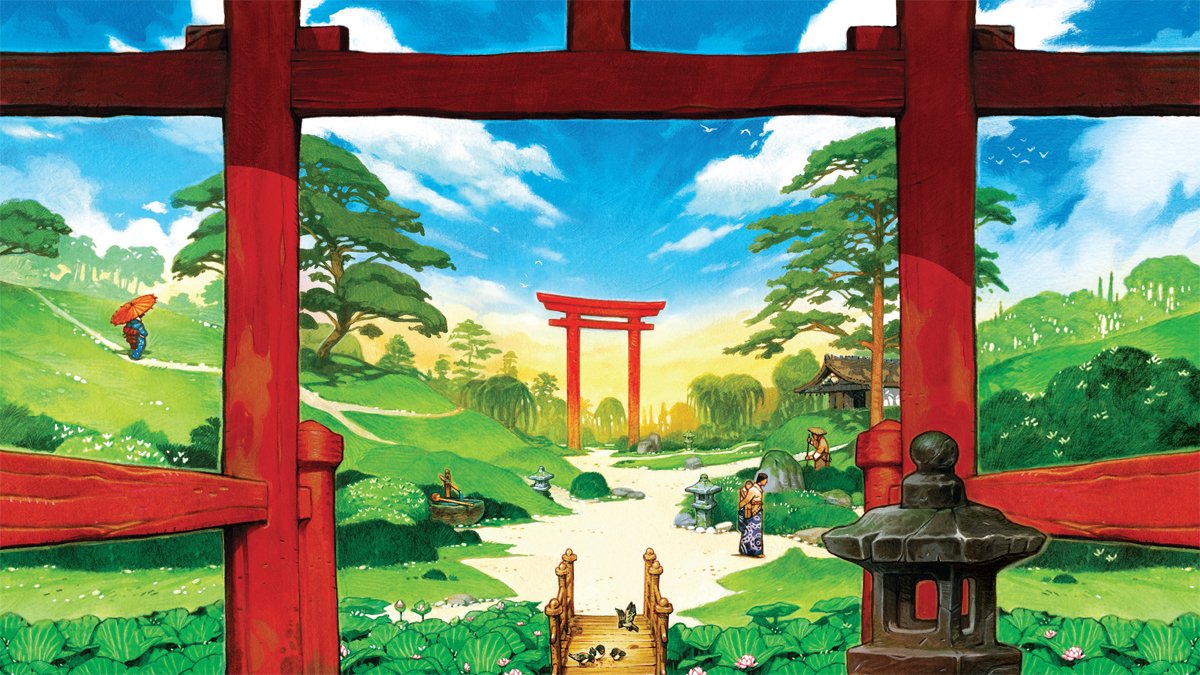 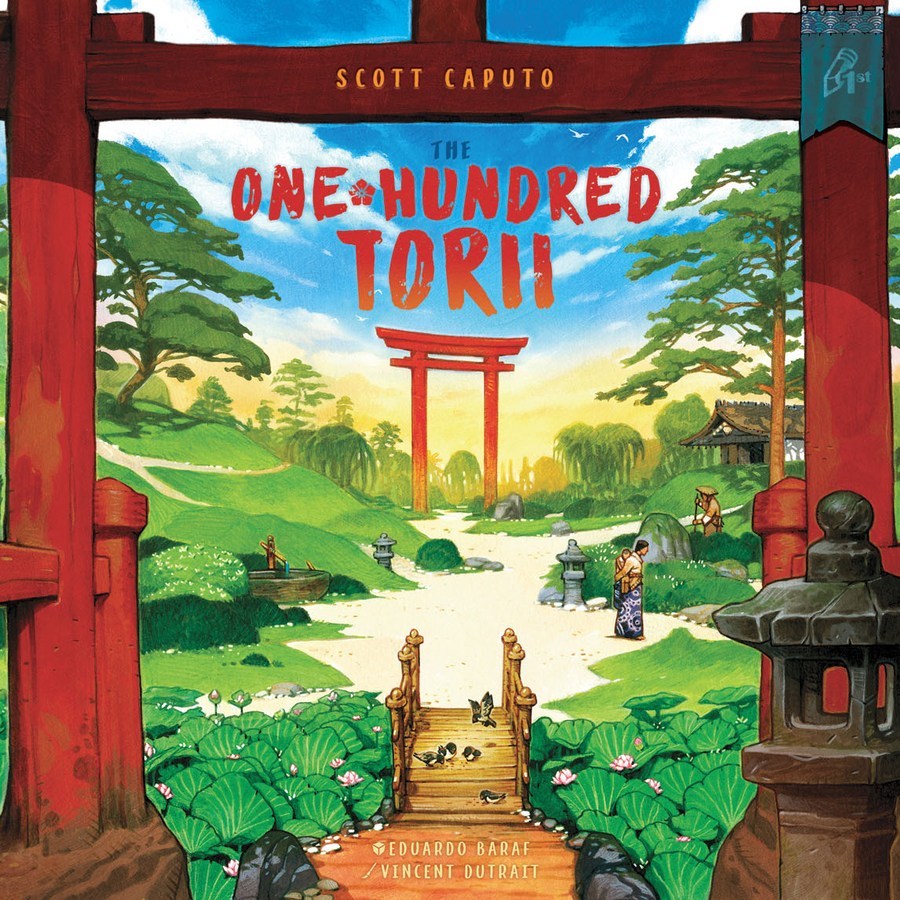 Walk through a Japanese garden, stopping to appreciate the landmarks and visiting various people along the way, as you step through The One Hundred Torii.

What Is The One Hundred Torii?

The One Hundred Torii is a tile-laying game from Scott Caputo and Pencil First Games for 1 to 4 players, ages 8 and up, and takes about 45 minutes to play. It’s currently seeking funding on Kickstarter, with a pledge level of $39 for a copy of the game. (Additional pledge levels are available if you’d like to include other games from Pencil First.) The age recommendation seems pretty accurate to me—you could probably teach the basic rules to kids younger than 8, but they may have a little more trouble with strategy.

The One Hundred Torii Components

Note: My review is based on a prototype copy, so it is subject to change and may not reflect final component quality. In this case, most of the artwork is complete, and the prototype itself was very high quality, but there are a few final tweaks that are planned.

The artwork for The One Hundred Torii is by Vincent Dutrait, who has illustrated nearly 100 games and expansions. His illustrations are gorgeous and (to my surprise) are done traditionally with pencils and paint on paper, rather than digitally. the tiles have lovely little details if you look closely, and the landmark and character designs are striking.

The tokens and markers in the the game all have fun shapes—the large character achievement tokens are die-cut in the shapes of the characters, and even the small tokens aren’t just plain rectangles. The landmark tokens are also shaped like the landmarks. Another thing that you’ll notice right away when playing The One Hundred Torii is how big those tokens are, particularly the character achievement tokens. The vendor tile (on the far left in the photo above) fills my palm. It seems a bit extravagant, because it’s basically just a reminder that you got 3 points, but they’re also fun and eye-catching.

The square tiles that make up the garden show the various landmarks: each one is depicted in a top-down view, with a bubble showing the icon a little larger. There are also gates—the “torii” of the title—on some of the tiles, in either red or blue. I did joke, however, that there aren’t actually 100 of these gates in the game, but The Forty-Five Torii doesn’t have the same ring to it, I guess.

The reference board (which also has a unique shape) provides some reminders: how many tiles to discard for setup for different player counts, what the red and blue gates do, and the cost and effects for all of the characters. There are two reference boards, with a different language on each side ((English, French, Spanish, and Italian), so depending on which language(s) you speak, you might use only one of these.

Overall, the game is visually appealing and the bright colors (and oversized tokens) are sure to make this an attention-grabber when you set it up on the table.

How to Play The One Hundred Torii

You can download a draft of the rulebook here. I’ll explain the regular game first, with solo rules below.

The goal of the game is to score the most points by collecting landmark tokens, enclosure tokens, and achievement tokens.

Place the starting tile in the center of the game area (leaving room to lay more tiles surrounding it), and then shuffle the rest of the tiles. Depending on the number of players, you will remove a certain number of tiles and return them to the box. Give each player 2 tiles and 2 coins.

Lay out all of the other components to form a supply. For the large landmark tokens and character tokens, you’ll only need one per player (though it’s up to you if you want to return extras to the box or just leave them in the supply—each player may only acquire one of each regardless).

The first time you get help from a character, you take the corresponding character tile (with the “2”) showing. The second time, you flip it over to the “4” side. Finally, if you are the first to get help from that character for the third time, you also take the large character token (worth 3 points) during the “claim achievements” phase. You may continue to hire the same character after that, but will not receive any additional points.

As soon as you’ve collected 5 of the same landmark token, you immediately trade them in for the corresponding large token, which has a “5” on it. When you collect 5 more, you flip the token over to the “10” side. (After that, you may continue to collect that type of landmark token, but you will not score any additional points for them.) When paying for help from characters, you may not spend large landmark tokens or make change.

In addition, if the tile you placed creates an enclosure—a section of path that has no open ends—and there are at least two landmark icons in the enclosure (matching or non-matching), then you also gain an enclosure token. Similar to the character tokens, the enclosure token is worth 2 points, then flips over to the 4-point side, and then if you’re the first to create a third enclosure, you get the 3-point enclosure achievement token as well.

At the end of your turn, draw back up to a hand of 2 tiles.

When the last tile has been drawn, every player (including the player who drew the last tile) gets one more turn, and then the game ends.

The solo game differs a bit—you will be playing against Onatsu, the pilgrim, and trying to beat her score. I won’t get into all of the details, but the gist is that you draw three tiles each turn, play one to the board, and give the other two to Onatsu. The tiles are placed below Onatsu’s board depending on what landmark icons are present. She scores the 5-point large landmark when she collects two tiles, and the 10-point landmark when she collects four tiles. Also, if the tiles placed under Onatsu’s board include red gates, she takes a 4-point character token from the corresponding character (at the top of the board). If they include blue gates, she draws an additional tile and places it.

Hiring help changes a little bit: the vendor lets you return 1 tile to the bottom of the stack and draw a replacement. The Samurai costs 2 to hire, and you place the samurai on one of Onatsu’s columns—no tile may be played in that column this turn (and then the samurai goes away). You may only hire each character twice during the game.

At the end of the game, you add up your points and compare them to Onatsu’s score—highest score wins, with ties going to the player with most character tokens and achievement pieces. (If there’s still a tie, Onatsu wins.)

Why You Should Play The One Hundred Torii

One of the games that first drew me into modern board games was Carcassonne, a tile-laying game in which all of the players added tiles to an ever-growing map, trying to complete various features to score points. I loved watching the terrain spread across the table, looking for the best location to place my tile, and hoping I’d get a good draw for my next tile. Of the games that attracted me to the hobby, it’s one of the few that I still play (these days, it’s usually on my phone), and because of it I still have a soft spot for tile-laying games.

Although The One Hundred Torii has quite a few differences, there’s still a bit of the same feel: I get to watch as the garden spreads across the table. Unlike Carcassonne, every tile fits anywhere (because each tile has paths on all four edges), but finding the best spot for your tile is still pleasantly puzzling. The trick is that you score for the nearest matching landmark, but you want your path to include as many gates as possible—this results in setting up long, meandering paths.

As you place tiles and try to get through a bunch of gates, you have to be careful that you don’t set up a long path of gates for an opponent. Some tiles have a landmark on one edge, and then a path with gates on other edges. Figuring out how to score with that tile without leaving a lot of open gates for the next player can be difficult, and clever use of the characters can help. In some cases, you may just decide that it’s worth giving an opponent access to the gates simply because you’ll get to travel through them first.

I like the way that you can spend landmark tokens—potential points—to hire characters, which immediately gives you points in addition to the abilities. But are you scoring enough points through the characters to be worth the points you’re giving up? With the three primary ways to score points—collecting landmarks, hiring characters, and creating enclosures—there are different possible paths to victory, though collecting landmarks is always important.

The game is fairly quick: the first time I played, I was expecting to do everything: score an achievement for getting all 6 landmarks and flipping three of them to the 10-point side and get some character achievements and build enclosures. I quickly found that there’s simply not enough time in the game to do it all (which makes sense), so you have to decide what to prioritize. You also want to pay attention to what the other players are doing: if somebody is hiring the same character as you, it may be worth racing them for the 3-point achievement.

I don’t usually play a lot of solo games, but I did try my hand against Onatsu, and found it quite challenging. The gameplay felt different in that I avoided closing off long paths with many gates, unlike in the multiplayer game. That way, I could keep using the same set of gates over and over again to collect landmark tokens. Still, Onatsu beat me by a few points (even on the easy level), because I couldn’t avoid letting her collect landmark tokens and getting those achievements. Maybe we’ll have a rematch eventually, but I generally prefer the game against other human players.

As a side note, I appreciated that the publisher had a culture consultant, Lisa Wilcut, as well as a review team, to ensure that the theme of the game was handled well. The back of the rulebook actually includes some educational material about Japan: a brief section about Japanese gardens and the torii, as well as explanations of each of the landmarks.

All in all, The One Hundred Torii is a lovely game that can really make you think. It’s a reminder that it’s not just about the destination, but the path that you take to get there!

For more information or to make a pledge, visit the The One Hundred Torii Kickstarter page! 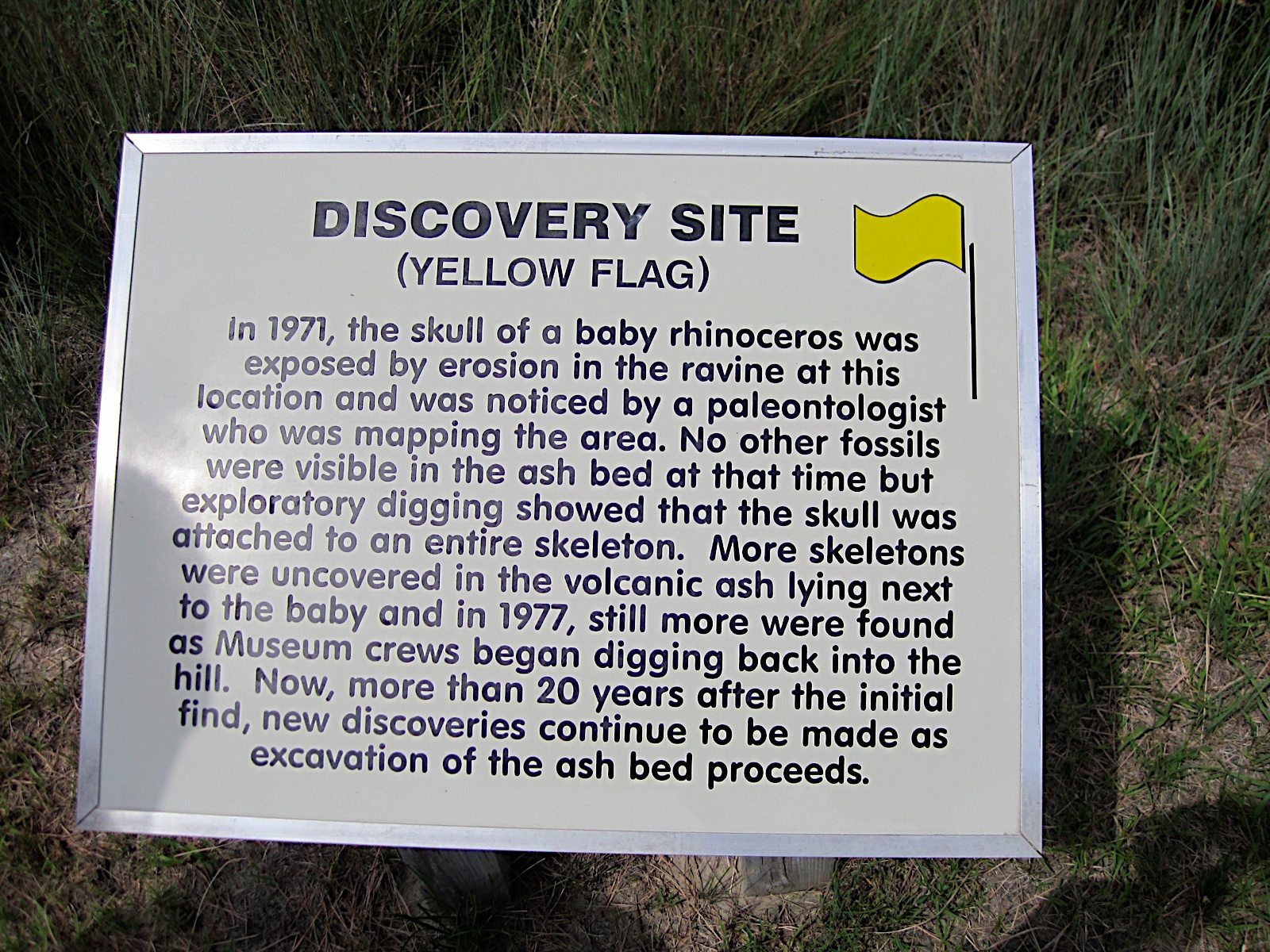 Send Your Child’s Imagination to China