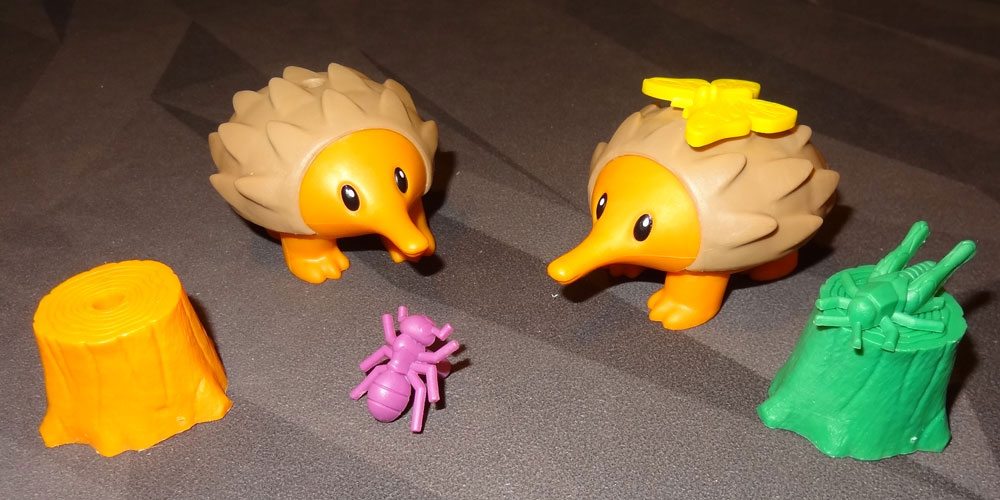 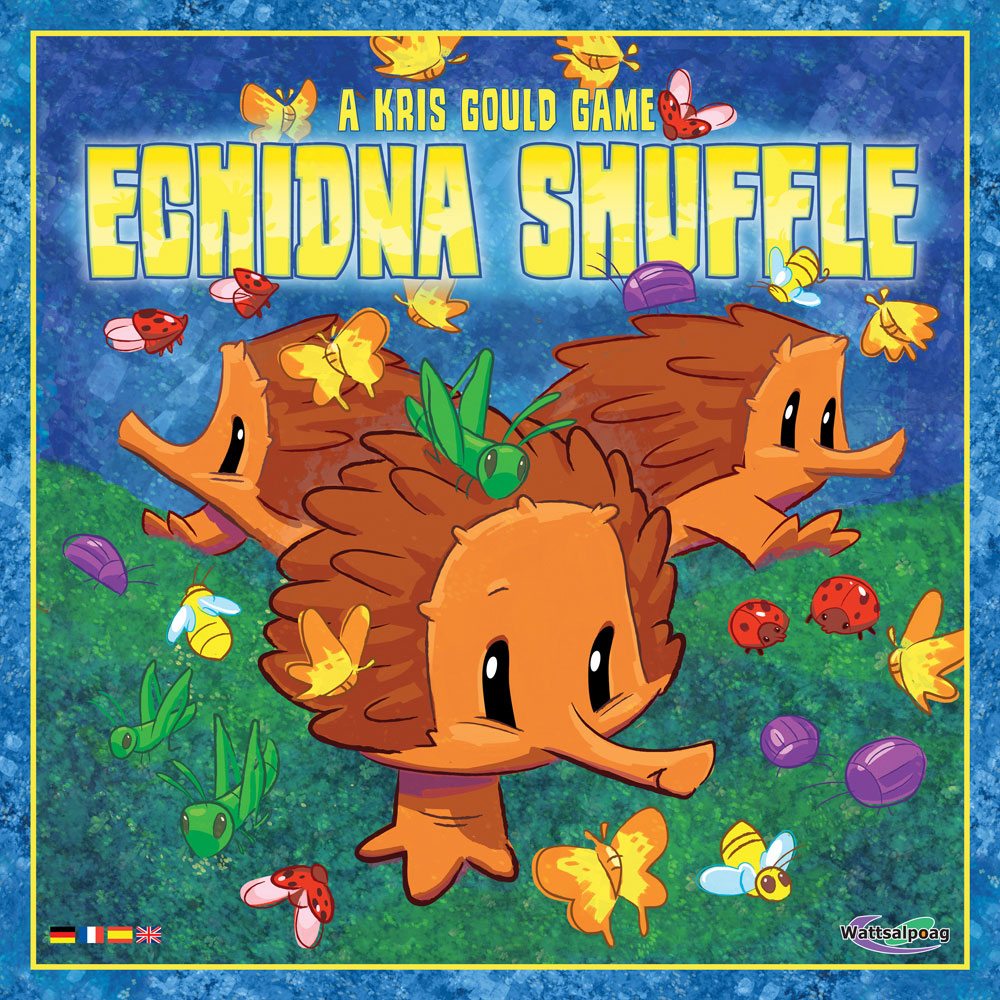 As the echidnas go round and round in circles, various bugs hop on to catch a ride to their homes. Be the first to get all three of your bugs to their tree stumps in Echidna Shuffle!

What Is Echidna Shuffle?

Echidna Shuffle is a pick-up-and-deliver game for 2 to 6 players, ages 6 and up, and takes 20–40 minutes to play. It’s currently seeking funding on Kickstarter, with a pledge of $24 for a copy of the game. Although the game says “6 and up,” it’s not a game that’s just for kids—and do note that it can get downright mean, depending on the players.

Note: My review is based on a prototype, so final component quality may differ somewhat. In particular, the colors and bugs on the markers will match the plastic pieces, unlike the prototype. Also, the die will be a custom die that has numbers from 2 to 7 (rather than a standard die marked with a Sharpie).

The board is a large square, depicting 21 leaves arranged in overlapping loops, with arrows showing direction of movement. The illustration for the board isn’t too exciting, but it’s functional. The movement board’s graphic design is also pretty bare-bones: it gets the job done, but doesn’t look particularly great.

However, the plastic pieces—the echidnas, stumps, and bugs—are wonderful, especially the echidnas, which are in two colors. Each echidna and stump has a small hole in the top, and the bugs have pegs that fit into the holes, so that they can ride along on an echidna or sit on a stump. They’re definitely the sort of thing kids will want to play with as toys—so you probably will need to keep an eye on them!

How to Play Echidna Shuffle

The goal of the game is to be first to get all three of your bugs delivered to their stumps.

Each player then passes their stumps to the left—that player will place all three stumps anywhere on the board. You cannot place two stumps of the same color on one leaf, but otherwise stumps may share spaces with echidnas, stumps of other colors, and pickup markers.

You must make the total number of moves indicated. Each move advances an echidna one space in the direction of the arrows. You may move any echidna on the board if there is space to move it.

Pick up: If you there is an empty echidna on your pickup space, you may place one of your bugs on it. With 5 or 6 players, only 2 of your bugs may be riding (different) echidnas at any given time—you must deliver at least one bug before you can pick up the third.

Drop Off: Any time an echidna carrying a bug steps onto a space with a matching empty stump, the bug hops off onto the stump—even if it’s not that player’s turn. Remove your stump and bug from the board.

As soon as any player has delivered all three of their bugs, the game ends and that player wins!

You can throw in a few variant rules.

Catch-up Tokens: Before starting, give players catch-up tokens (1 to the second player, 2 to the third player, and so on). On your turn, you may spend tokens for extra moves, one token per move.

Home Stretch Tokens: As soon as you have only one empty stump left, you’re in the home stretch. Every time another player moves the echidna carrying your bug, you get a move token (up to four maximum). You may spend tokens for extra movement.

Extra Bugs: As soon as you have delivered a bug and removed the stump and bug, put your bug back into your supply, where it can be picked up again.

Roll Every Turn: For a more random game, roll the dice every turn instead of using the movement board and markers.

Why You Should Play Echidna Shuffle

Fun fact: echidnas actually do walk around in trains (though it’s a mating ritual and not actually about picking up and delivering bugs).

Another fun fact: I first came across Echidna Shuffle over five years ago at GameStorm, a local gaming convention. Designer Kris Gould had an enormous version of it that he was testing out. If I remember the story correctly, he found a box of rubber echidnas at the Archie McPhee store, and really wanted to design a game around them. I think this may have been combined with a story about hedgehogs running in circles.

The rubber echidnas were pretty large—life-size, really—so the board was enormous. Instead of bugs, you were trying to deliver flowers to flower pots, and they were held on with rubber bands. It was ridiculous, but a lot of fun, and definitely eye-catching.

I’d seen Gould and Echidna shuffle a few times since then at various regional conventions, and the game itself hasn’t changed too much from the original concept, though the components have shrunk down to a more reasonable size, and the movement board is a newer addition that I don’t remember in the older version I played.

Essentially, Echidna Shuffle is a big traffic jam and it’s your task to untangle it—at least, just enough to get your bugs to their locations. And if you can redirect somebody else’s bug so that they have to take the long way around? Well, that’s just a bonus. The game can be deliciously frustrating, because you can see exactly what you need to move in order to get your bug to its stump, but there are just so many echidnas in the way. You might spend all of your moves just clearing the path, and then the next player just zips up and fills them with some more echidnas. The trick is knowing when to work on clearing a path, and when to just work on redirecting your opponents’ bugs instead, based on how much movement you have available. Sometimes all it takes is one step in the wrong direction to send an echidna way off course.

But it’s also really great when you can set up one of your bugs on a path so that it will definitely get to your stump. You can just leave it alone at that point and focus on your other bugs, because eventually somebody will probably have to move that echidna along to make room, and you don’t have to spend all of your own movement points on it.

The starting placement of your pickup spot and your opponent’s stumps is also pretty important. You want to make sure that, wherever you put the stumps, they’re not really easy to get to from the pickup points. In one game I played, the order of the stumps made it impossible for blue to deliver a bug without giving purple the win (see above)—that’s one that blue should have worked on first, rather than after purple had delivered the other two.

The movement board is a nice touch, and I prefer it to the total randomness of rolling dice for movement. When you roll the die, you get a random number of steps—but then you know you are guaranteed a certain number for your next turn. It balances out the disappointment of rolling a 2, and it gives you some advance warning when you roll a 7 because you know your next turn is going to be quite short.

We found that with more players, the game can actually go more quickly, simply because there are so many bugs being picked up and dropped off due to somebody trying to make a path. With only 2 players, you have a better ability to keep track of where your opponent’s bugs are, which means both of you can divert deliveries more effectively. But in any case, it’s definitely an amusing game full of echidna pile-ups.

Younger kids can play it and it may feel more like a roll-and-move game, if they’re not able to work on strategies that harm other players. They’re mostly focused on finding a path to their stump, which may be all they can consider. Older players, though, will really delight in playing mean, and the game can be quite antagonistic if you like that sort of thing.

Echidna Shuffle is a fun take on the pick-up-and-delivery game. I won’t lie: gameplay can be frustrating at times, like sitting in a traffic jam, and you’ll wish the echidnas knew how to zipper so everything could move more smoothly. But it’s also a lot of fun, and the echidnas are just so dang adorable. If you like games that you can play with your younger kids and then break out for game night with your adult friends, Echidna Shuffle may fit the bill.

For more information or to pledge for the game, visit the Echidna Shuffle Kickstarter page!

Disclosure: GeekDad was loaned a prototype copy of this game for review purposes.

Expanding the World of Belfort