Corrina: All the Monsters

Ray: The New Age of DC Heroes line is winding down, with all the original series ending by June. Damage was the first to debut and one of the longest-running, but in sixteen issues I can’t say I really got any idea of what the point of its title character was. Damage #16 is pretty clearly a rush job to wrap up the plots, since last issue’s cliffhanger just revealed the identity of the main villain and this issue already has Damage and Congo Bill captured by her. That villain would be Echidna, the Mother of Monsters, and she’s turned all the monsters on Bill’s monster preserve into her loyal minions. This is a good choice for the final showdown, and Aaron Lopresti is clearly having a lot of fun drawing the monster menagerie. This line was designed as an artist-first project, and Lopresti has drawn all but the first few issues of this series. At the very least, this final issue looks great.

The problem is, as it has been since the first issue, that I have no reason to care about Damage or Ethan Avery. A fairly standard “man-and-monster” archetype with a military twist, the parallels to Hulk are impossible to avoid. The bulk of the issue builds up to Ethan unleashing the beast, followed by Damage pummeling any monsters in his path and eventually sending Echidna back to the underworld. From there, Ethan gets a boat from Congo Bill and heads back to the mainland to begin the whole story again. I doubt Damage will ever appear again in a major role besides maybe as background cannon fodder in a big event, but it’s worth noting that he ends the sixteenth issue in exactly the same place he was in the first. He’s still a loner, still mostly a blank slate, and Damage is still largely out of his control and serves as a “Dark side” to the meek civilian. Just bland and forgettable.

Corrina: I bet DC’s pitch to Lopresti for this issue was “you can draw all the monsters!” Lopresti: “Sold!”

Lopresti indeed draws all the monsters and it looks amazing. And that’s the only reason to buy this issue. 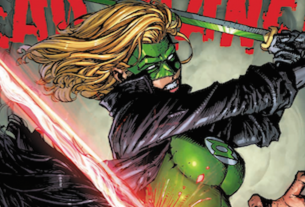