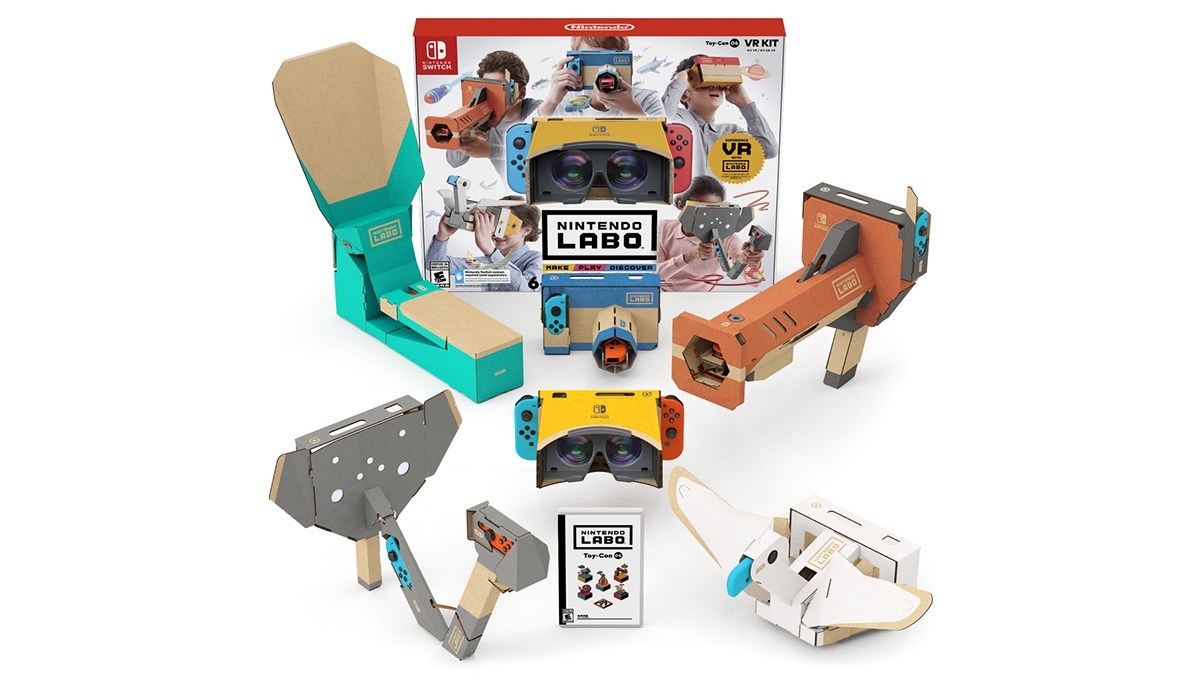 Nintendo Labo continues to be a rather divisive line, with opinions divided between gamers who feel the cardboard constructs are gimmicky and unnecessary and those of us who genuinely enjoy the entire make/play/discover experience. Labo’s latest iteration, Labo: VR, likely won’t change your mind if you’re already a diehard detractor, and that’s a shame because it really puts a fun new spin on what Nintendo Labo is and opens the door for even more madcap permutations.

The first proper build in the Toy-Con 04: VR Kit is, obviously, the VR Goggles. While the game activities presented in Labo: VR can be played in regular 2D on the Switch console (which is recommended for those under 7 and anyone who otherwise has problems with virtual reality gaming), the Goggles are the very heart and soul of the operation.

Using only a few sheets of perforated cardboard, some anti-slip stickers, a couple of plastic grommets, and the included VR lenses, it’s a refreshingly simple starting point. With the VR Goggles constructed, it’s just a matter of sliding in your Switch console and checking out the virtual world that awaits you.

From the get-go, you have access to simple but immersive VR minigames using traditional Joy-Con controls. Coupled with the quick build time, this makes for a rewarding experience, though I caution you all to learn from my mistakes.

Not only should you thoroughly clean your Nintendo Switch’s screen prior to inserting it into the VR Goggles, but it’s also not a bad idea to blow any remaining detritus out of the construct with a can of compressed air. Suffice it to say greasy fingerprints and shards of cardboard tend to pull one out of the VR experience.

The Toy-Con Camera was something I didn’t get to experience at the Labo: VR preview event last month, so I was anxious to jump into this project specifically. Again, it was a very simple construction, and there’s something particularly satisfying about the way the zoom feature works by rotating the “lens” just like a proper SLR. It feels perfectly natural, as does pressing the R button on the side-mounted Joy-Con to take a picture.

Your initial photographic excursion is to the sea floor, where you’re tasked with taking a series of specific photos—almost like a search-and-find puzzle. My girlfriend and I had a ball handing off the Toy-Con Camera, taking turns to see what we could discover. Looking up and down to swim toward the surface or deeper into an underwater cavern felt perfectly intuitive, and after building the companion Snorkel project, we had even more fun bedeviling each other as a nosy, bug-eyed fish.

IR stickers applied to the Snorkel accessory easily let a second person take on the role of this bothersome creature, showing up in the VR ocean whenever the Toy-Con Camera turns their way. I’m not suggesting that you use this to ruin your significant other’s carefully framed photographs, but that is exactly what I did.

My daughter, conversely, was far more interested in the House Camera activities. Like Ocean Camera, it challenges users to completes tasks by taking pictures—though this time it’s of the beloved inhabitant of the cozy house from the original Nintendo Labo: Variety Kit.

The Toy-Con Elephant build is a more challenging project, but not nearly as difficult as those from the recent Vehicle Kit. There are some thinner pieces of cardboard that are prone to crumple and bend if you’re not careful, so pre-folding on a smooth, flat surface is recommended.

First, you’ll make the face, complete with more IR stickers, then the handle and two-piece trunk. The trunk assembly requires the use of rubber bands (which have vexed me in previous Labo kits), but this time they made for smooth sailing. The Joy-Con infrared sensor and gyro controls combine to give the Toy-Con Elephant really precise one-to-one movement tracking, which you’ll put to the test first via the Marble Run minigame.

My kids love constructing marble runs, so this became a family favorite. It essentially involves moving (or removing) floating platforms and other elements to get a rolling ball into a ring. While definitely not the flashiest of Labo: VR games, it is uniquely rewarding with its slow but deliberately increasing difficulty. It also perfectly sets the stage for the ensuing doodling.

Doodle is the 3D drawing activity that I so enjoyed during my initial demo. I obviously haven’t grown very much as a VR artist, but it’s still fun to try. There’s a “Guess the Drawing” multiplayer mode that really capitalizes on the pass-and-play nature of the Labo: VR system, but even just idly experimenting in the artistic sandbox is pretty fascinating.

While the Toy-Con Bird does up the build difficulty significantly, its modular construction is easy enough to master. In the end, you’ve transformed dozens of cardboard punch-outs into a reasonable facsimile of a bird, complete with flapping wings, a Joy-Con beak, and a rear-mounted insert slot for your VR Goggles.

Yes, you look up the business end of a bird. Yes, I still find this hilarious.

By flapping the wings to power your avian mount forward and changing course my simply turning your head, it’s very easy to navigate this game’s growing map, finding new eggs and performing fetch quests to help your fledglings grow up big and strong. They, in turn, follow you on your continued flight.

The most impressive thing about the Bird build is simply how effectively it works. When you press the Toy-Con VR Goggles to your face, your hands automatically go toward the hold handles, which are, cleverly, right where you need them to flap those cardboard wings.

The pièce de résistance of the Labo: VR ecosystem is the Toy-Con Blaster. It is both the most traditional—hearkening back to the NES’s Zapper light gun—and the most elaborate build. It also involves all the construction elements you’ve explored in your previous Labo projects.

There’s a multi-piece barrel with a Joy-Con holder, a handle, cocking mechanism, and rear-mounted trigger, and even a Left Joy-Con holder on the stubby “stock” used to enter bullet time. Inside are multiple stickers (IR and otherwise), rubber bands for the firing and reloading actions, plastic grommets, and lots and lots of cardboard.

It’s easy to get frustrated with such an expansive build, so, just as the Nintendo Labo: VR minigames suggest taking frequent breaks from play, this project similarly benefits from a little downtime. This is also the one build where I found myself frequently using the Switch touchscreen to rotate, zoom, and further inspect the instructions.

It certainly took a while—at least a couple of episodes of the Chilling Adventures of Sabrina played in the background while a noodled—but it was hard to deny the final results.

While pressing your forehead up to the back of the Blaster’s VR Goggle mount looks funny to those around you, it really pulls you into the shooting experience. I was happy to revisit the alien-busting of the core Blaster mode, but I quickly discovered much more to the story, not to mention additional Blaster-based activities.

The pass-and-play challenge of Kablasta, for example, is sort of a… reverse Hungry Hungry Hippos. Are there profound ethical ramifications to feeding hippopotami by firing fruits into their gaping maws? Probably, but that’s another discussion for another day.

All This and More

It’s important to note that these are far from the only material components of the full Nintendo Labo: VR Kit. Additional accessories range from the simple to the mind-blowingly complex.

On one end is the Toy-Con Pinwheel. Constructed in minutes, it attaches to the VR Goggles’ removable top cover and hangs down near your mouth. Blow onto the Pinwheel and the spinning IR stickers on its alternating blades enable the Joy-Con to translate that speed and velocity into fired in-game projectiles.

On the other side of the scale is the Toy-Con Wind Pedal. Though employed a little less frequently than the other Labo: VR modules—its two main uses are in the timed, all-terrain Bird Dash race and the obstacle-jumping Hop Dodge—the complexity of this construction rivals even that of the Blaster. Once completed, it’s also big and rather unwieldy, and I’m already starting to worry about where to store it when the kids and I are actively racing birds or jumping over balls.

Mario, Zelda, and Beyond

Last week’s reveal that Nintendo Labo: VR support is coming to Super Mario Odyssey and The Legend of Zelda: Breath of the Wild is a big deal. Admittedly, it’s not as big a deal as, say, brand new original VR Mario and Zelda titles, but don’t discount the fact that this content is coming via free updates.

In Odyssey, VR content arrives as a “simple, sharable” bonus experience. You’ll collect notes, coins, and instruments and will even be able to explore additional areas in some kingdoms. In Breath of the Wild, however, you can play the whole game using the VR Goggles.

Does this open the door for even more VR content in older or forthcoming Switch titles? Who knows, but I certainly wouldn’t discount it. Either way, this Super Mario Odyssey and BOTW support certainly makes the pickup price of Nintendo Lab: VR—particularly the budget-priced Starter Set + Blaster—all the more enticing.

There’s a lot to see and do with Nintendo Labo: VR. So much so, in fact, that I’ve scarcely scratched the surface here. There are 64 different VR Plaza minigames, the new Toy-Con VR Garage and the returning Toy-Con Garage programming tools, and a number of additional content offerings that I failed to discuss for the sake of brevity and due to a lingering spoiler embargo.

Instead, I’ll just say that, whatever it is that you love about Labo: VR, there’s much more of it waiting to be discovered. Whether your thing is fighting or flying, head-scratching puzzles or meditative meanderings, there’s more to see and do than even the $79.99 purchase price would have you believe.

As I’ve stated previously, my interest in VR gaming was, until recently, negligible (to say the least), but the light, quick, social slant of the Nintendo Labo Toy-Con 04: VR Kit hits right where I live. It takes the well-worn slogan—Make. Play. Discover.—in a new, exciting, and, I’d daresay, boundless direction.

Review materials (including so, so much cardboard) provided by Nintendo of America. 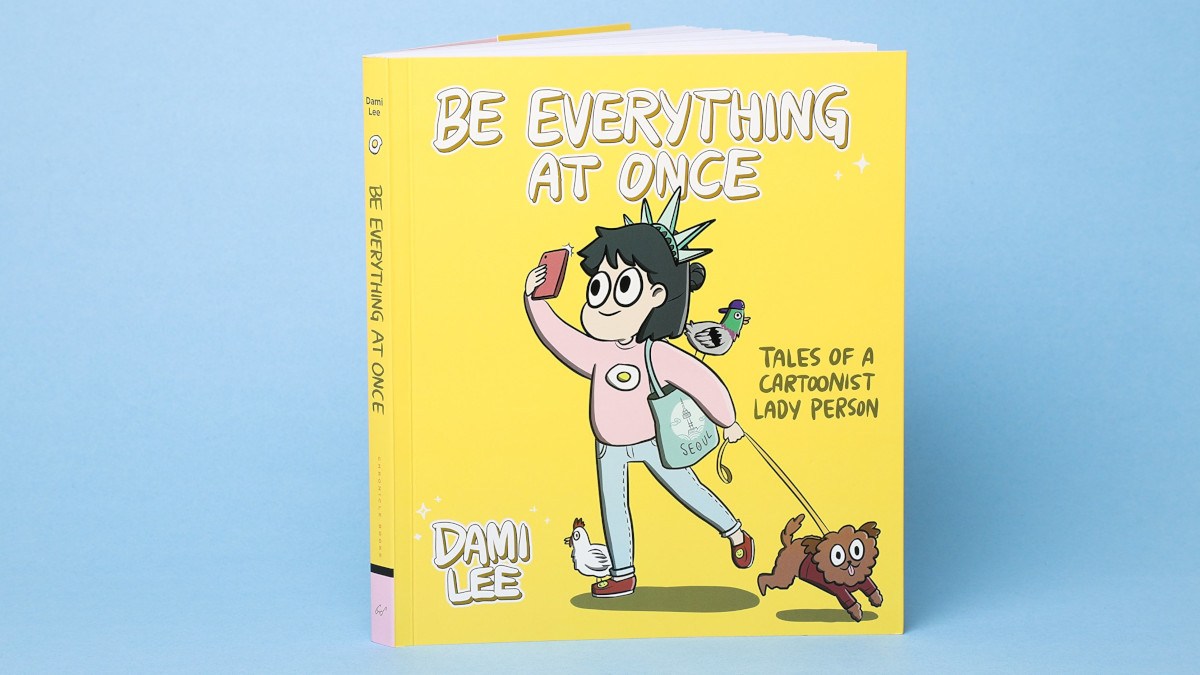