Ray: One of the best things about G. Willow Wilson’s run so far is that it manages to be deeply political while remaining fully grounded in the fantastical world the title character inhabits. That was on display in the first arc with Diana struggling to broker peace in a civil war that Ares was escalating, but it’s even more effective in Wonder Woman #63, a hilarious and poignant done-in-one issue focusing on the trio of mystical beasts stranded in man’s world. A unicorn, a satyr, and a minotaur, they don’t exactly fit in like your average wizard can, and Diana’s attempts to get them asylum are complicated by human bigotry. The opening scene where they try to get past border control and customs will be all too familiar to anyone who’s come into the country while looking out of the “norm”. But they’re also not exactly patient, and this leads to one misadventure after another as they escape from US authorities and try to find their way in the city below.

Following their escape from the authorities and a brief meeting with Diana, they go to get something to eat and stumble into an awkward situation in a fancy restaurant. Although the host doesn’t want them there, they find a friend in a young employee who is all too willing to go on a strange adventure with her new friends. We’ve only gotten to know these characters over a few issues, but they’re already some of the best additions to the Wonder Woman mythology in years. The art team does an amazing job of giving these inhuman beings distinct facial expressions while never letting them become TOO human, and the ending introduces a fan favorite Wonder Woman supporting character from the Rucka run – as well as bringing in a major Wonder Woman villain who knows more than she’s letting on about the presence of mystical beings on Earth. The second arc is looking even stronger than the first so far.

Corrina: This is one of those bridge issues from one arc to the next and those are often my favorite issues, as the fallout of the last arc becomes clear, all the while setting up problems in the future. This time, instead of focusing on Diana, we have the magical/godly trio who simply look like “trouble” to nearly everyone and, indeed, they’re sort of their own worst enemy, making one unfortunate choice after another.

But it’s funny and sad and poignant, especially when Ferdinand reappears and finally meets another of his kind.

And I love the waitress who gives the trio a chance, especially when she gets to ride on a unicorn. I hope we see her again because she made a terrific first impression.

Aside: my sister used to work as a greeter at the Old Ebbitt Grill in Washington D.C. It’s a real place. But probably you won’t encounter any minotaurs, unicorns, or satyrs while you’re there. If you’re lucky. 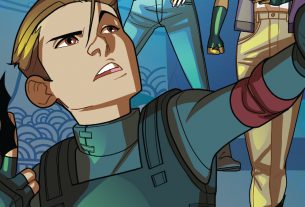