Ray: It’s been a long time since Green Lantern was one of DC’s most buzzworthy franchises. Geoff Johns turned it from a third-stringer to a weekly epic, but after he left Robert Venditti ran a competent but effective run for years. Writers like Sam Humphries, Tim Seeley, and Justin Jordan did compelling work with other Lanterns, but it seemed for a while that everyone was enjoying the books, but no one was really talking about them.

That’s about to change, as a-list creators Grant Morrison and Liam Sharp jump on Hal Jordan’s story with The Green Lantern #1 and a new direction. From the start, it’s clear Morrison will be doing things differently. The first third of the issue features no human Green Lanterns, instead, it pits a group of alien Lanterns against a creepy band of pirate spider smugglers. It’s fast-paced, incredibly detailed, and in some places grotesque – a floating finger with a Lantern ring attached and a sentient virus with a particularly disgusting method of communication are just two elements going on in this very busy and cosmic story.

Liam Sharp’s art is just as good as ever, but the shift in colorist from Romulo Fajardo Jr. to Steve Oliff is really noticeable. Not in a bad way, but it feels like almost a completely different artist. Sharp’s art on his previous works was smooth and mythic. Here it’s gross, gritty, and feels inspired by artists like James Stokoe. By the time Hal Jordan shows up, the issue becomes a bit confusing – it almost feels like an origin reboot for a few pages. Hal is in a new relationship, seems to between jobs on Earth and is not having a good time of it. Then a group of shape-shifting aliens impersonating hitchhiking bums attack, and this issue is off to the races once again. After fending off this threat, Hal heads to New Oa where it turns out that the corruption in his battery may be extending much further than expected – it seems to be affecting the Book of Oa itself. The concept that Oa’s living history may be starting to deceive the Corps is fascinating and is exactly the type of epic, cosmic plot Morrison is made for. I’ve been less-than-thrilled with some of his work on other franchises, but I think the Green Lantern Corps may be the corner of the DCU he’s made for.

Corrina: Morrison had, in his works, been in love with the style of the Silver and Golden Ages of comics. That has led to mixed results in his DC Comics. All-Star Superman is wonderful but his brief run in the regular Superman comics that rebooted Superman to as close to his Golden Age origin as possible was sometimes compelling, sometimes not. And his Earth One: Wonder Woman graphic novels are an uneasy meld of modern feminism and fetish domination/submission from the Golden Age Wonder Woman.

The good news here is that blending Hal Jordan with his Silver Age self is easy, as Hal has changed little from the cocksure test pilot and semi-arrogant Green Lantern from the Silver Age. This is a deliberate choice, as in the interviews published in DC Comics, the creative team talked about liking Hal this way.

But bad news, at least for me and those with no tolerance for Silver Age Hal, is that I still cannot stand Hal Jordan even after reading this issue. Morrison nails his character but that’s bad because I think he’s the worst of the Green Lanterns and his macho sensibility is a throwback that doesn’t play at all well in modern society.

He’s the arrogant American cop who runs into danger and, through luck and grit, solves the problem because, well, he’s Hal, and then explains to others what they did wrong. This is not a different take on Green Lantern, it’s the same old take.

I’m was far more interested in the modern characters of Simon and Jess, who brought something new to the franchise. Or John Stewart, especially the version from the animated Justice League series. Each offers a unique take on the space law enforcement officer.

Hal does not. This is apparently what drew the creative team to the book. That’s fine, creators should write what they like but it’s not a choice that interests me or any other not-fans of Hal.

This story is fine, if a bit confusing in how it cuts back and forth between a Lantern’s death and another action sequence, the art is good, grittier and less polished to reflect the mood. If you do like Hal, you’ll be interested in this.

It takes a brilliant creator to make me interested in Hal Jordan. Darwyn Cooke did it in DC: The New Frontier by focusing on Hal’s sense of wonder. But Morrison’s take, in this issue, simply doubles down on all the reasons to dislike Hal. 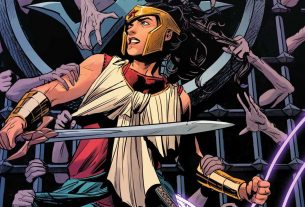