Corrina: This Comic Still Doesn’t Know What It Wants To Be

Ray: Dan Didio gets a big-name cowriter in Sideways Annual #1, as Grant Morrison takes some time from his high-profile Green Lantern relaunch to co-writer a story dealing with his reinvention of the Seven Soldiers of Victory – as well as another prominent DC hero he used to write. When we last left off with Derek, he had just escaped a world of mutated DC heroes ruled over by the fascist vampire Perrus. He found himself in a dark catacomb where he came across a cocoon – containing the New 52 version of Superman, T-shirt and Jeans included. That version of Superman seemed to be erased from history when the two Supermans were merged into the current versions, but it seems something survived. The opening segment, as Derek and Superman battle a giant alien centipede lurking in the underground, is probably the best this series has been in a while – it’s great to see Derek acting like a young hero in a superhero world he’s just entering.

Eventually, they make their way back to the surface where they encounter the Seven Soldiers again. That’s where this issue falls apart a little – earlier in the issue we see several members of this team die, but then they’re okay again.

Morrison often writes in a non-linear fashion, and it shows. Although everything is largely explained, it’s still a rather jumbled comic that spends more time trying to make sense of its elaborate continuity than letting Derek play off this oddball group of heroes. Eventually the Unseen show up again, as does the villain Perrus, and there’s another slugfest before the heroes escape. Superman winds up joining the Seven Soldiers while Derek returns back home to resume his life.

There’s a backup by Didio and Roberson focusing on the Unseen as they find a new world and a new start, setting up a brief confrontation with the Fuginaut. Overall, this series has a lot of interesting ideas, but it almost feels like Derek has become a side character in his own story and the title’s suffered as a result.

It’s been about all and none of those things, leading to an aimless character who sometimes has aimless adventures that don’t connect to either the main plot or Derek learning his powers. Sideways Annual #1 is helped by Morrison doing his thing with his new 52 Superman in jeans and t-shirt, and the weirdness surrounding that world, and good characterization of the Seven Soldiers.

It just fails to be about Derek or his growth. He’s the least interesting thing in this. (Which is somewhat the same problem with his whole series, too.) 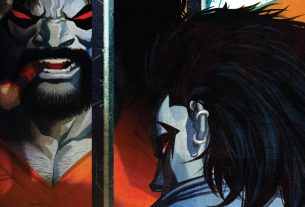