Ray: Coming off the spectacular mini-event The Witching Hour, Justice League Dark #5 heads back to its roots by exploring one of the great obscure magic-based series in the DCU’s history, Shadowpact. The death of Nightmaster in Dark Nights: Metal and Detective Chimp’s subsequent rise to the role has barely been explored yet, but this issue is devoted to the dangling plot thread.

We get a new artistic team as well, as frequent Injustice artists Daniel Sampere and Juan Albarran step up for Alvaro Martinez and keep the ball rolling with style. They’re so good it’s hard to believe they’ve never been given an A-list title before. The issue opens with a brilliant minimalist scene depicting Nightmaster’s funeral and the impact he had on so many people while Bobo just wallows in his own misery. It’s only when the Justice League Dark calls on him for a mission, and they and Traci 13 give him some tough love, that he finally snaps out of his funk.

That character-driven opening sets up an explosive second half, as this title proves once again that it does fantastical action like no one’s business. Detective Chimp is recruited for a trip into Myrra, the mystical realm that Nightmaster guarded, but there’s some business there he never took care of. As the Justice League Dark descends into Myrra and finds a twisted realm of dead warriors and massive dragons, Swamp Thing and Constantine play their own high-stakes game – facing off against Nabu. While the former Doctor Fate easily handles them and both the heroes are already weakened from the trials they faced in the event, they soon bring in a major player from the magical side of the DCU that ups the stakes. And speaking of new players, a major Shadowpact player returns with a dark twist that promises some major reveals next issue. This series has a lot of dangling plot threads, and most of them are holding a ton of promise. This is easily the class of the DCU’s team books at the moment.

Corrina: I wonder if Tynion has a list of cool but obscure characters at home that he pulled out when he received this book. If so, he’s determined to put all of them into this series and, fun for the reader, he’s taken all kinds of detailed notes of their origins that enhance their characterization.

Detective Chimp, especially, is fascinating in this issue because he’s not human and therefore he doesn’t trust humans. That makes the role of hero ill-fitting for Bobo. He doesn’t have full rights in regular society because he’s seen as an animal, and he’s more of a loner and outsider than even, say, Constantine, who is human, or Swamp Thing, who’s connected to the Green.

All that plays into Bobo’s reluctance to rejoin Justice League Dark.

Of course, Bobo’s mistakes in Myrra may have something to do with it as well. Oopsie.

We’ve raved about the art team in this series, especially when depicting horrible, gross things from nightmares, but Ray’s right, the switch to the new art team is hardly noticeable, as the high quality continues. Sadness permeates the pages detailing the funeral and the images of the bar practically smell of whiskey and beer.

Not to mention there are dragons. 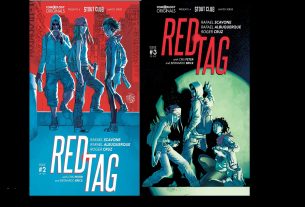