Ray: As Drowned Earth hits its third chapter, the second Justice League event in the last two months finds its groove and delivers its most entertaining chapter yet. With the Earth covered in mutating other-dimensional liquid and Dark Gods from another world invading the heroes are split into several different last-ditch missions. And watching it all from above is Batman – still in his giant Bat-brace and hoverchair, and accompanied by his psychic starfish Jarro. Apparently, Jarro thinks Batman is his dad and that’s the most adorable thing ever. I hope Jarro gets some bonding time with his new siblings in future issues. But cute cosmic horrors aside, the stakes are high in this issue. Flash is slowly transforming into a mutant, Superman’s powers have been stripped away by magic, and the two of them team up with Mera to fight off their transformed allies. They then begin a pilgrimage to the Tomb of Orion – the ancient sorcerer who originally locked up the dark gods, and may be the key to stopping them again.

At the same time, Aquaman is being held by the trio of sea gods and is about to be thrown down the same endless pit they were imprisoned in. He’s saved at the last second by Wonder Woman, riding what’s essentially a cosmic sailboat and kicking off the best action segment of the issue. This event doesn’t quite have the depth or horror of The Witching Hour, but it’s a pretty great example of blockbuster comic book storytelling done right. You have a compelling, huge-scale threat, good character interaction, and a number of surprising twists every issue. How can you not love a comic where a giant three-headed cat attacks – and it’s working for the good guys? The end of the issue has one shocking twist after another, including a betrayal and a major villain attack on the Watchtower. I’m hoping that as the event continues, it’ll deliver a spectacular finale and set up some lasting changes for Aquaman and Mera in time for Kelly Sue DeConnick’s upcoming run.

Corrina: Yes, I was skeptical. But I somewhat enjoyed the installment with Aquaman last week and I absolutely enjoyed this installment of Drowned Earth as well.

Ray went over the plot but I wanted to focus on the artwork. Manapul’s work gives this story a style that makes it look a great deal like a fairy tale, from the flashback of young Mera viewing the city of Atlantis to Orion’s Tomb to the sailboat that seems something out of Greek myths.

Another artist might be too realistic or too gritty but Manapul, especially in his choice of colors, is perfect. He conveys such depth in the first glimpse of Arion’s tomb, especially since he must have used several colors for the sand that are similar but not quite the same. And his choice of perspective from underneath in the panels as Batman’s fleeing the Hall of Justice is perfect.

And, yeah, Jarro is fun.

Though I have a question: if the Earth is drowned, what do the land-based villains expect to gain? 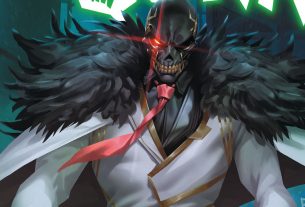