Ray: Jeff Lemire’s dimension-hopping adventure continues in The Terrifics #9. The whole series is one of the most pure fun comics DC is putting out, combining great art and fast-paced storytelling with a Silver Age aesthetic where anything can happen.

It’s time for yet another art switch, as Jose Luis steps on for Dale Eaglesham, but the two styles are a good match and yet again it’s a smooth transition. We pick up right where we left off, with the split teams of heroes each encountering a different threat in their search for Tom Strong’s family and allies. Some of those threats are more hilarious than menacing – such as “Ducktor Dread”, the evil duck version of the mysterious masked villain they’ve been chasing. Plastic Man, Pneuman, and Solomon get an assist from Warren Strong, the Rabbit version of Tom Strong. It makes sense in context, and Tom’s wife Dhalua shows up to get them out of there. Meanwhile, Phantom Girl and Rex Mason are on the run from the Aztech Empire when they discover that the portals they’ve been using to get around are suddenly vanishing.

Those two heroes, along with Tesla Strong, are rescued when Dhalua’s time sphere shows up with the other heroes in tow, but Tom Strong and Mr. Terrific are in much bigger danger. When we last left off, they had arrived in Gotham – only to be confronted by an angry Swamp Thing who saw them as trespassing in his swamp. Although Strong is ready to fight the hulking green guardian, Mr. Terrific is able to talk them both down and find out that Swamp Thing has information relating to their quest. Mr. Terrific and Tom Strong return to Terrifi-tech, which has been all but abandoned by Michael due to his dimensional travels, and encounter Doctor Dread – or so they think. It’s actually a drone, and the real villain is back at Stagg Industries – leading to a reveal that I’m not sure is entirely genuine. If true, it’s odd but intriguing. I’ve learned to trust Lemire’s plan on this book, though – he’s playing with a huge group of characters and worlds, and doing them all justice. Here’s hoping this is the last book from this line standing.

Corrina: I confess, before this, I had not read one Tom Strong story. But now I would happily read an entire Strong family series written by Lemire. That’s basically what this issue is, as Dhalua and Tesla Strong save for the day for the rest of the Terrifics. A family having time-travel interdimensional adventures together, with each an equal member? Sign me up!

As for the rest of our team, it’s an interesting contrast to see a human Rex confront a world as strange and off-kilter as Rex’s previous Metamorpho form. I can’t recall a storyline that had Rex human for such a long period and I’m enjoying it. I hope it stays but I suspect sad-sack Metamorpho Rex may return at some point.

Yet the character who gets the most development this issue is Mr. Terrific. He sees in Tom’s family what could have been for himself and finally confronts his past by going back to Terri-tech.

Do I believe the reveal of the villain as Java? Well, it seems obvious, which makes me not believe it. We’ll see. 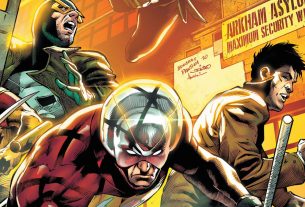