DC’s team of mutants and weirdos have appeared in animation before, but a team-up with the meddling kids is new territory. Smartly, this issue doesn’t really water down the twisted nature of the Doom Patrol – they’re still the depressed freaks thrown together by tragedy, and the issue doesn’t shy away from the fact that their partnership is rocky at the best of times. The Mystery Machine crew meets them when they drive down a mysterious street that has signs that make no sense, and soon they encounter a giant monster. The Doom Patrol fights it until it mysteriously vanishes, and then the two teams are introduced to each other. The Doom Patrol includes Danny the Street, which was the street they were driving down in the opening scene, and the issue calls back to the fourth issue of this series where it was name-dropped that Beast Boy was Elasti-Girl’s adopted son.

After that, the issue slips into a slightly repetitive groove, with one monster after another showing up and the teams dispatching them while the Doom Patrol bickers among themselves. Doom Patrol, under quite a few runs, has had a lot to do with mental illness and depression and the issue touches on that, if lightly. But it’s still heavy material that Sholly Fisch’s title isn’t fully capable of exploring.

The scene involving Crazy Jane probably should have been left on the cutting room floor, because it gives the impression of mentally ill people turning into monsters. The reveal of the villain as one of the Doom Patrol’s most powerful foes leads to a finale that has more stakes and danger than most issues of this comic, but the arrival of Flex Mentallo as the last line of defense takes the issue in a bizarre and hilarious direction that ends it with a bang. It’s one of the most interesting issues of the series, if not one of the most successful. 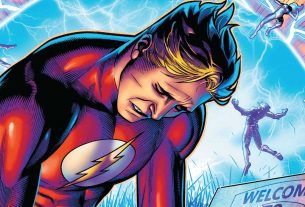