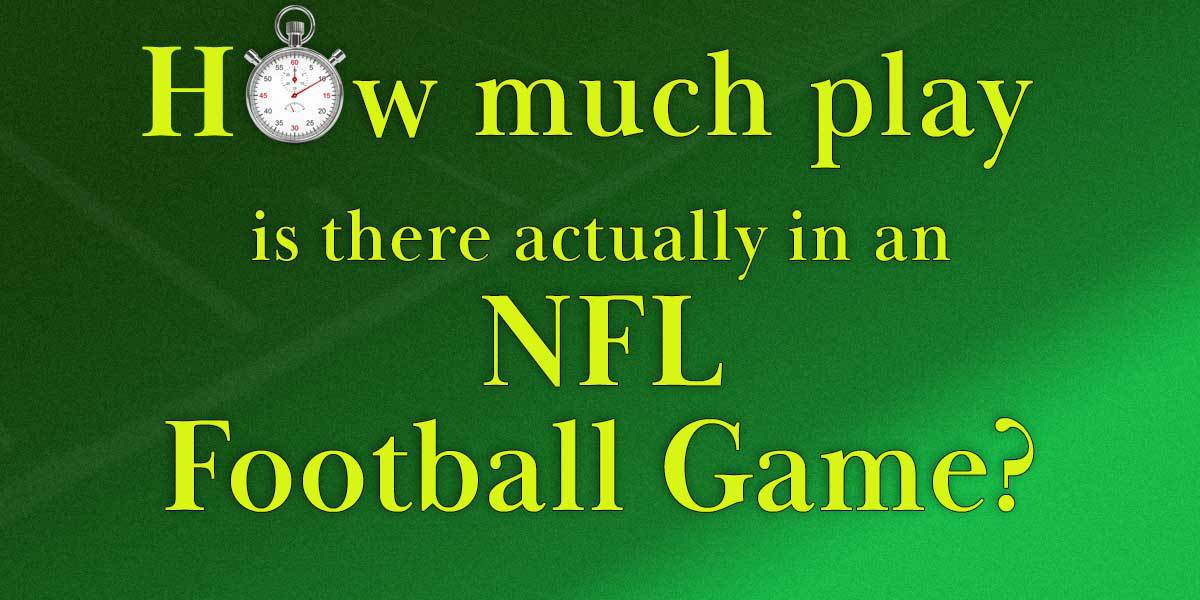 Almost exactly ten years ago, I wrote a piece for GeekDad called How Much Action Is There Really in an NFL Football Game?

In it, I used a stopwatch to count time while the ball was in play as my hometown Kansas City Chiefs played the Denver Broncos. At the end of the 2 hour and 56 minute game, the ball had been in play for 12 minutes and 8 seconds. The rest of the time was devoted to commentary and commercials.

Like ten years ago, I still don’t watch much NFL. I like to find other things to do to fill my Sundays. When I do think about the game, I am reminded of political pundit and baseball aficionado George Will’s observance, “Football combines the two worst things about America: it is violence punctuated by committee meetings.” An exact statement, if there has ever been one.

Still, I was reminded of my old observations last week when someone retweeted my post from 2008. I was shocked that someone had found that old thing and then was surprised again when I sought out the Chiefs’ schedule and learned they were playing the Denver Broncos on Monday night this week. It seemed a fateful opportunity, so Monday night I sat down with a stopwatch, the remote, and a legal pad to see if anything had changed over the past decade.

My methodology was the same – any run, pass, punt, or kick and my stopwatch was running. As soon as the whistle blew, the timer was stopped.

At the final whistle, it was surprising to see that everything was about the same. I know that in the past decade, the NFL suffered from some very slow games and made some changes to speed games up. Monday night’s battle clocked in at three hours and five minutes, similar to a game’s length ten years ago.

At 13 minutes and one second, the ball was in play about a minute longer than ten years ago in this game.

A minute may not seem like a lot, but it’s an improvement of better than 8% over 2008’s experiment. Some of that can certainly be laid at the scrambling feet of the Chiefs’ second-year phenom quarterback, Patrick Mahomes, whose creative improvisation made plays last longer. Likewise, the Chefs‘ league-worst defense allowed for some big runs and passes, which allowed more seconds to tick off. Great googly-moogly, indeed.

Still, that left 172 minutes that there wasn’t any action on the field. That’s a lot of replays, pretty awful commentary, and commercials. Yes, commercials. Those cynical among us will readily identify that televised sport (and ever-increasingly, live sport) is simply an advertising delivery system. So on Monday night, I counted those, too.

Over the course of the game, I was shown 107 commercials. Truck manufacturers, Marvel movies, Disney parks, fast food chains, and financial service providers all peddled their wares to me. I didn’t time them, but if the average spot is 30 seconds, that’s 53 minutes of advertising — more than four times longer than the ball was in play. Yikes!

It was interesting to revisit this decidedly unscientific study and see that the NFL is still pretty much the same in regards to the quantity of product delivered. Monday’s were the only snaps I’d watched all year and probably the only ones for the whole season because, thankfully, the first puck of the season is going to drop tonight. Tell Mr. Will that I like my violence to be meeting-free.

1 thought on “How Much Action Is in an NFL Football Game?”