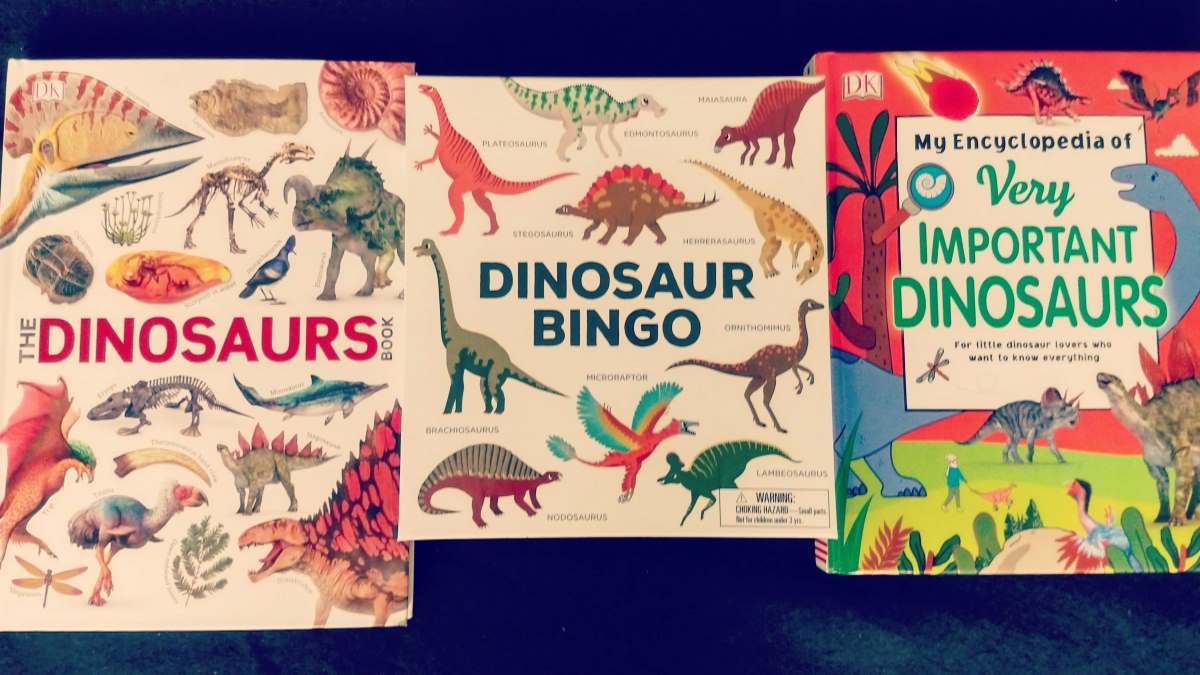 This weeks word is “Dinosaurs.”

Most children go through a dinosaur phase. For many of them, it never finishes. That’s why “Word Wednesday: Dinosaurs” was an inevitability. This week, I have three different books to entertain your budding dino-hunters. Three books to help you catch up with the plethora of crazy named dinos that have sprung up since we (I) were children. Three books that will help you tell your allosaur from your elbow.

Actually, if I’m honest, it’s two books and one game, but that didn’t scan so well.

What is My Encyclopedia of Very Important Dinosaurs?

You can probably tell from title and cover that this is a dino book for younger readers, aged from around 6+. It’s a DK book and that brings with it everything you’d expect. There are lots of engaging pictures and small chunks of informative banner text.

Like most DK books, the Very Important Dinosaurs is split into color-coded sections.

This section talks about dinosaurs in general terms, discussing the eras and periods in which they lived. It looks at how the Earth has changed with a great section on plate tectonics, before moving on to the varying types of dinosaur and the other creatures that coexisted with them. This latter section has a great breakdown of the characteristics of insects, reptiles, and mammals, that will be useful beyond learning about dinosaurs.

Yellow: Life as a Dinosaur.

This section details the day to day of dinosaur life. What they ate, where they lived, and how they communicated. It details the differences in physiology between meat and plant eaters and how dinosaurs reproduced.

Easily the biggest section of the book, filling 130 pages (out of 220), this section is broken down further into different types of dinosaurs. Meet the Dinosaurs is essentially an almanac of dinos and includes:

And that’s just a sample. There are 56 dinosaurs mentioned in all. Each dino gets a double page spread with several facts about them running along the bottom. Such as when they were alive, how big they were, where they lived and what they ate. Every dinosaur is given a phonetic spelling of their name to help you learn how to pronounce them.

There are usually photos of bones or fossils of the dinosaurs, as well as colored digital images of the dinosaurs themselves. Surrounding the pictures are chunks of text. There’s quite a lot of text for a 6-year-old to absorb, but I imagine if they’re interested in dinosaurs, they will soak it up like a sponge.

Orange: Clues From the Past.

The final section of the book details how dinosaurs are studied. How all the preceding information in the book was discovered. It discusses what a fossil is, how they’re made, the different types of fossil, and the first people to find them. Mary Anning gets a double page spread to herself. There’s a section on a paleontologist’s toolkit and a double page on the latest dino discoveries. Finally, there is a name-checking guide and a glossary of dinosaur words.

This book is absolutely perfect for dinosaur enthusiasts. Though it’s aimed at 6+, even adults with a casual interest, reading over their child’s shoulder will find the book fascinating. It’s filled with stuff you sort of know, but lays it all out for you in a fabulously clear fashion.

This is possibly not an introductory book. You might want something a little smaller to start off with, but if you have a child desperate to know more about the prehistoric world,Very Important Dinosaurs is absolutely perfect. 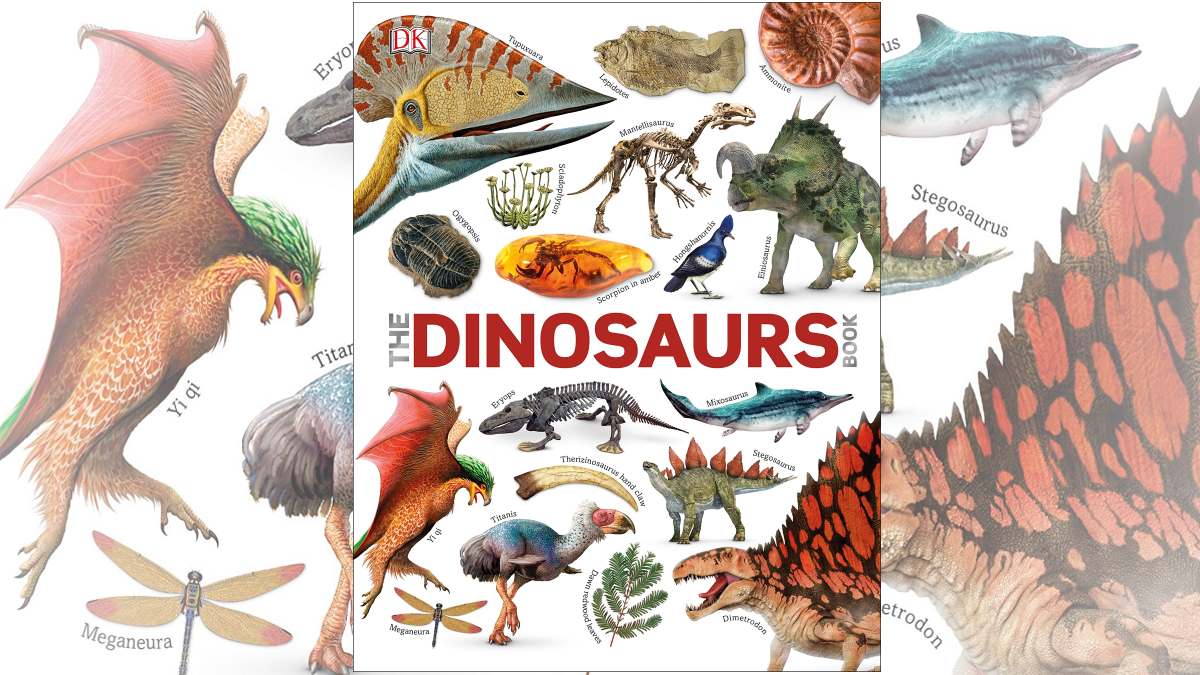 What is The Dinosaurs Book?

For those graduating from Very Important Dinosaurs, DK has a more advanced tome, The Dinosaurs Book. This is the same, only more so. As you’d expect, The Dinosaurs Book goes into greater depth and uses more scientific terms. I would say its aimed at children aged 11 upwards, but so evocative are the pictures and the information inside, younger children will enjoy dipping in and out too.

The Dinosaurs Book is considerably more than that too. More accurately, it’s the history of life on Earth up until the birth of man.

Again, the book is broken down into color-coded sections.

The book opens with a description of fossils and fossil finds around the globe, before moving onto a potted history of the origins of life on Earth. There’s a brief overview of Evolution, notes on the classification of living things, and a deeper breakdown into types of dinosaurs. It uses technical terminology throughout. There are no “bumpy spiky” dinosaurs here.

Blue: Before the Dinosaurs.

Starting with “the first animals” and moving on through some of the more outlandish denizens of the sea, this section charts the rise of animals on Earth. Trilobites, fish, plants, and arthropods are detailed before the book moves on to amphibians, reptiles, and finally, dinosaurs.

Yellow: The Age of Dinosaurs.

As you’d expect this is the biggest section of the book. It’s a detailed almanac of land-based dinosaurs. It’s very similar to the equivalent chapter in Very Important Dinosaurs but with more detailed text, and an even bigger variety of dinosaurs, Ornithohominosaurus, anyone? Once again there are lots of pictures, both impressions of what the dinosaurs looked like on the outside, but with lots of skeleton reconstructions too.

The history of flying dinosaurs. To give an indication of the level of detail this book goes into, on the opening page of this chapter, there is a sidebar called “Colour Coding.” This talks about melanosomes – structures inside cells that contain color pigments. The sidebar goes onto explain how these fossilized melanosomes may go onto reconstruct the colors of feathered dinosaurs. As you can see The Dinosaurs Book goes into great depth and detail. 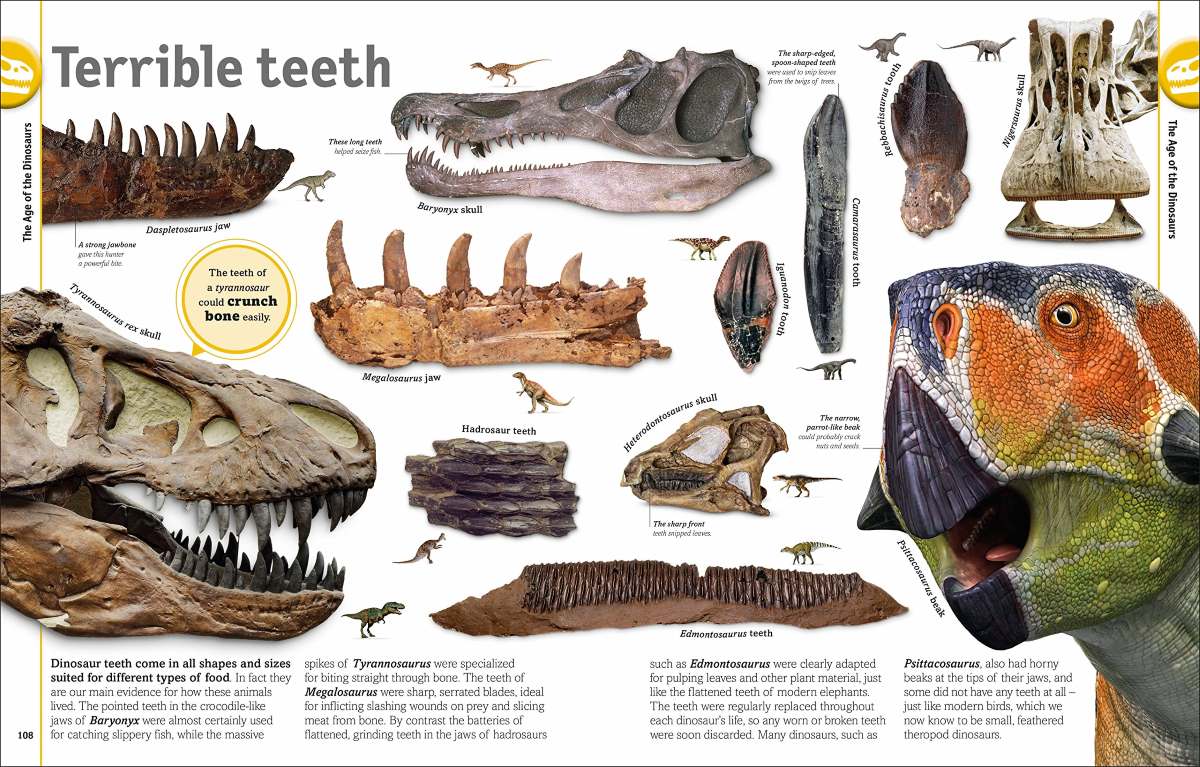 This brief section looks at the difference between dino- and Pterosaurs, and gives an account of the evolution of these flying lizards.

Alongside the rise of the dinosaurs, life under the sea exploded too. This is detailed in this section.

Green: The Rise of Mammals.

As the book closes, it moved towards the arrival of man, starting with a plant explosion and invasion of insects, before moving onto the first mammals. Mammalian evolution is often left out of these types of book, and it was refreshing to see it here. I have to say I have learned a lot from it, whether it be about types of mammalian body cover, the size of giant herbivores, or the existence of mega-marsupials. I never knew such things existed. The pictures in this section are amazing.

The final pages of the book are devoted to the arrival of primates and the very first humans, bringing to a close a very informative look at pre-human life on Earth.

Why Read The Dinosaurs Book?

Pretty much for the same reasons as Very Important Dinosaurs, because its brilliant at what it does. It’s an engaging and informative, easy to access, account of the latest theories in dinosaur research. It sets out in context the history of life on earth in relation to dinosaurs, something that is often forgotten. Everybody has heard the word “Jurassic” but not that many people know what it means in the context of both dinosaur history and the history of life on Earth. This book reveals all.

The sections on dinosaur types are stuffed full of information. Enough to keep even hardened dinosaur fans happy. If you find your child is outgrowing Very Important Dinosaurs then The Dinosaurs Book is the next logical step and one you won’t regret taking.

If you’d like to buy The Dinosaurs Book you can do so here, in the US and here, in the UK. Note: Like many US DK science books, the US edition has the Smithsonian branding.

What is Dinosaur Bingo?

If you have younger dinosaur fans, they’ll probably love Dinosaur Bingo from Laurence King publishers. Especially if they’ve learned everything there is to know about dinosaurs from Very Important Dinosaurs, above.

This is a fun little game that replaces numbers with dinos for the traditional game of Bingo. What better way to test out your newly found pronunciation skills?

What do you get in the box?

The game comes with a game board, 8 double-sided game cards (Bingo sheets) 48 dinosaur tokens, and 150 counters. There’s also a cardboard dinosaur head from which to pull the tokens.

It’s pretty simple. One person takes the dinosaurs out of the dinosaur head, calling out the name each time. If that dinosaur is on your card then you can put a token on it. The first person to fill their card with tokens is the winner.

Bingo is fun. Anybody can play it. This is fun too. I like the stylised dinosaurs and so do my children. The set is a great way for the kids to show off their dinosaur knowledge.

The cardboard dino head didn’t work very well for us. The cards kept getting stuck, causing great frustration. I think I cloth bag would have been a better bet. We ended up just shuffling and stacking the cards.

The game is tried and tested, you know exactly what you’re going to get. If I’m honest Dinosaur Bingo isn’t going to set anybody’s world on fire. It is however playable by the whole family, even those usually unmoved by such things.

If you’d like to buy Dinosaur Bingo, you can do so, here in the US and here, in the UK.

If you enjoyed this post, do check out my other Word Wednesday posts, here.

Disclosure: I received copies of all the products mentioned in this review. 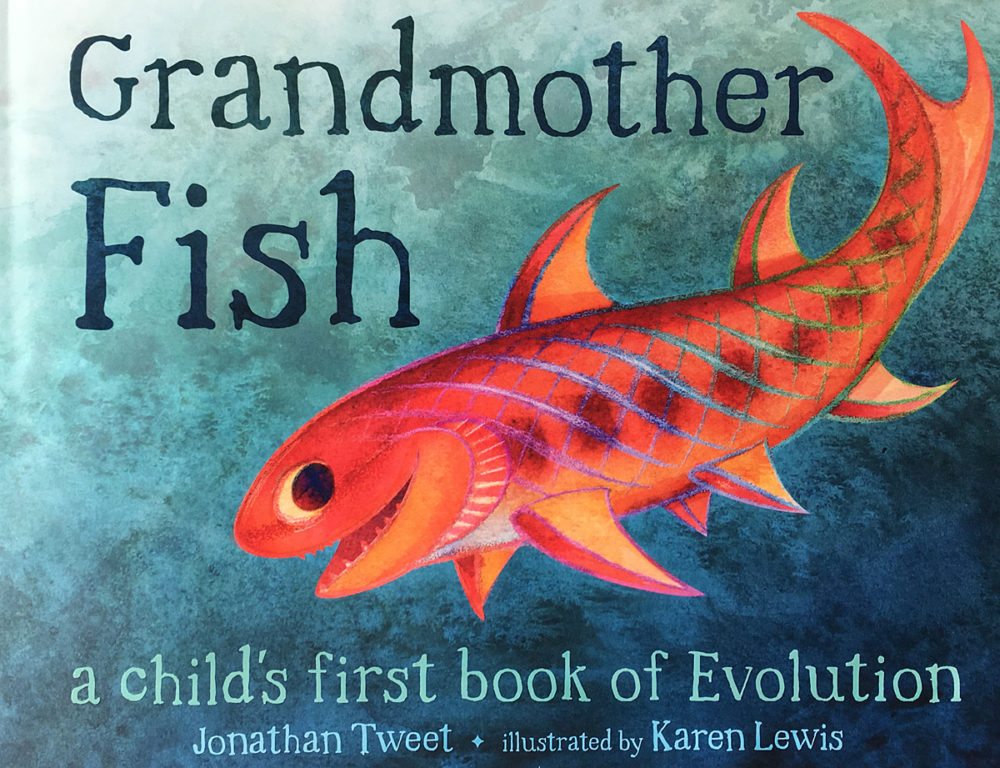 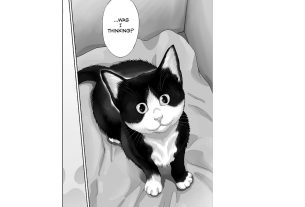 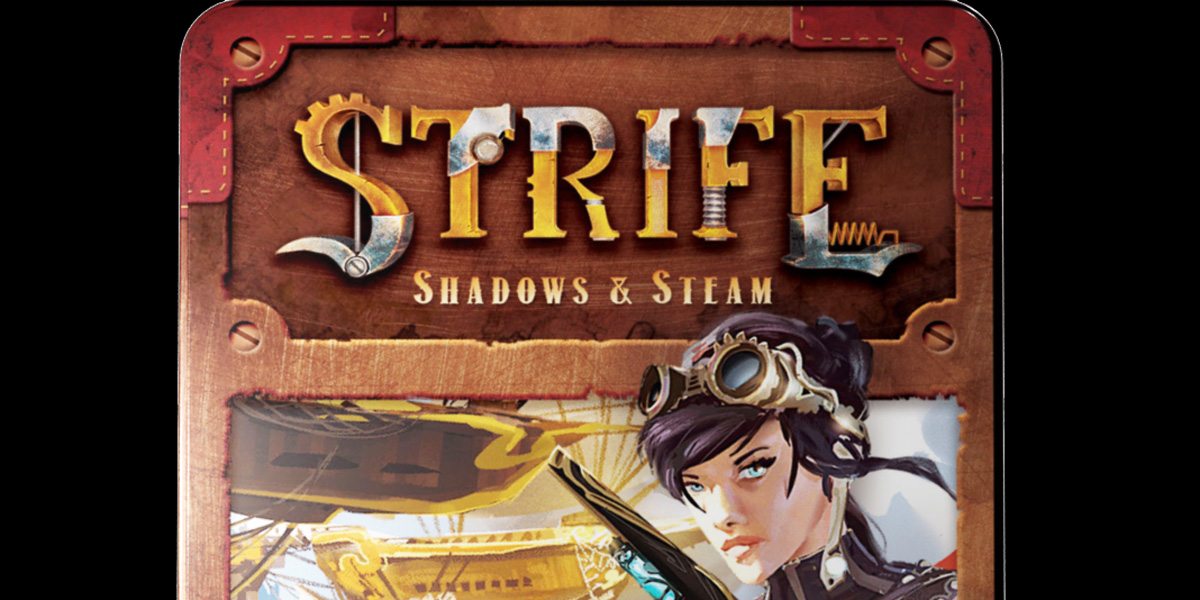