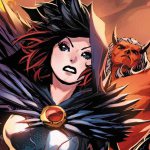 Ray: As we enter the second half of Marv Wolfman’s Raven maxiseries, the long-percolating subplot about Raven joining Baron Winters’ Night Force finally starts to come into place. The threats facing Raven and her allies are getting bigger and bigger, as the opening segment brutally shows. A young magic thief named Fauna Faust – tied to Felix Faust – stages a dramatic heist using her ability to create portals and gets away – only for what looks like a mist-like grim reaper to show up and cut her in half. After that grim prologue, we cut to Raven at school, trying to bluff her way through a history test. I loved the idea that she could use her soul-self to sneak into the library and check a book while her body was still in the test, but it doesn’t quite work out for her. More of this clever fusion of superheroics with teen drama, please. Less ponderous ramblings about the coming apocalypse. Unfortunately, as soon as Raven bombs her test, it’s off to Baron Winters for more ponderous ramblings about the coming apocalypse.

With a makeup test pending, Raven finds herself having to rescue her strange sister Violet, who is dying from a mysterious ailment. A young boy who has been in a coma since he was born is suddenly surrounded by strange energy. All these subplots lead Winters to summon Raven again for a do-over in his attempt to recruit her. She’s still deeply suspicious of him, but he makes a dramatic case in a two-page spread designed like cave paintings that an ancient evil is returning and needs her attention. Where this issue fails is in that there’s a little too much going on at once. The drama feels a bit chaotic, and it works best when we’re simply following Raven in her life. I enjoyed the addition of Traci 13 as another one of Baron Winters’ ambivalent recruits – I’m glad we’re still following her even after her relationship with Steel ended. The cliffhanger introducing yet another new member doesn’t have much of an impact yet, but this title is still pretty solid on the footing of a likable lead heroine.