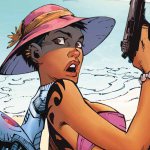 Ray: Unlike Damage, The Silencer consistently benefits from having a strong lead character. Honor Guest has a unique personality and a decent supporting cast, and there’s consistent forward motion in the story. This issue, Honor’s quest to track down Talia Al Ghul and bring an end to the civil war in the assassin world leads her to a small Asian nation that happens to be just over the border from one of the most popular theme parks in the world. In the guise of a family vacation, Honor’s brought her family to the border (on the intense, action-packed plane ride we saw last issue), and she’s more than happy to let her husband and son enjoy the rides while she sneaks off and over the border. Although her husband starts to notice her frequent absences, she’s an effective con artist and has little trouble making her getaway. First she’s able to interrogate the robotic Iverson and get information on the location of the mysterious Quietus. Then it’s across the border for the real action.

Quietus has been lurking in the background for most of this series, but this issue he finally emerges as a major player. He’s also not exactly a pure villain, either – much like Honor, he has his own agenda and is trying to manipulate the assassin’s war to his advantage. The element of bio-modifications is new to this series – while Honor is still almost entirely human, several other assassins like Quietus have turned themselves into things that are barely human at all. When Quietus unleashes his power, it’s impressive, but he’s still able to form a temporary truce with Honor. The back-and-forth this issue is the best part – every time Honor gets close to her goal over the border, she’s pulled back to her family, and we see glimpses of the dangers and negative effects they keep on facing as a result of her work. It’s not one of DC’s best books yet – the villains are fairly generic and the plot doesn’t advance as fast as I’d like – but a strong lead character goes a long way to making it work.