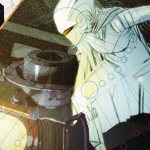 Ray: The last of the current wave of Young Animal books to conclude, this title – like its sister books – was likely cut back from twelve issues to six. Unlike those books, it doesn’t feel like Jody Houser’s dark Gotham adventure was forced to come to an abrupt conclusion. There’s a lot happening in this issue, but she never loses sight of the emotional core of the story even as the events happen a mile a minute. When we last left off, Violet Paige had been confronted by the deranged Jason Todd in the middle of the battle, as the last surviving Bat-boy (by way of murder) descended further into insanity. A flashback shows how Jason fell so far from grace, but Violet wastes no time fighting back against him. The battle becomes more intense when Fennec Fox jumps in, not realizing just how dangerous Jason his. With her sort-of sidekick in danger, Violet is forced to take a more ruthless approach. Surprisingly, though, it’s her mother – who seems to have some sort of mental healing powers – who brings the battle to an end.

With Jason neutralized as they try a different approach to ending his threat, Violet turns the focus to a much older enemy. Her cruel brother, who was responsible for sending her to Gather House, here has her alternate double in stasis for experimentation. She brutally forces her way into his lab, finding her doppelganger and freeing her from being trapped between life and death. Her showdown with her brother, the battle that’s been building since the beginning of the series, is over a bit too quickly for my tastes. I did like that this issue shows that Violet – who has largely been defined by her more ruthless approach to crimefighting – can show some mercy. Surprisingly, the story doesn’t end with her being sent home to her own Gotham, but I guess that makes sense. She never quite had a place in Batman’s Gotham. This is one where she can take the lead as a hero and forge her own identity. This is goodbye to Violet Paige’s Gotham and her story for now, but I hope we’ll be revisiting them again soon. 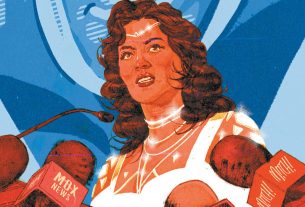