Games Workshop is everywhere these days. Gone are the days where it hides in the grimdark shadows, covetously hoarding the secrets of its game-seed. This year the company was at Gen Con with a metric tonne of reveals and new products on the way. These include but are not exclusive to, Munchkin Warhammer 40K and a new Talisman spin-off from Pegasus Spiele.  In addition, there was PlayFusion’s Age of Sigmar: Champions Trading Card Game and the new Warhammer Fantasy Roleplay from Cubicle 7. Two things I hope to bring you more coverage of in the coming weeks.

Perhaps most interesting to GeekDad readers were three gateway games, designed to bring a younger crowd to the GW universe. Here’s a first look at Blitz Bowl, Space Marine: Adventures, and Lord of the Rings: A Quest for Mount Doom. All are aimed at ages 8+ and are slated to play in under an hour.

Note: At this time, there are only plans to release these games in the US and Germany. Also, they will not be available in Games Workshop stores. Instead, you’ll find them Barnes and Noble, and other retail outlets in the US, and Game Spot and Mayersche in Germany. Release is “mid August” so start looking for them any time now! (Added 15/8: I gather these are now available from Barnes and Nobel online, with international shipping for those elsewhere in the world keen to get hold of a copy.)

What is Blitz Bowl?

Blitz Bowl. The little brother of Blood Bowl. For GeekDad readers who follow cricket (both of you), Blitz Bowl is Twenty20 to Blood Bowl’s, Test Match. It’s a five-a-side cutdown version, with fewer rules and faster gameplay. The game features 5 miniatures from the original Blood Bowl box in red (orcs) and yellow (humans) plastic.

It has a simplified tackling and blocking mechanic than in the main game and introduces a new “Mark” action, used when you want to block an opponent from running down the field or throwing the ball. In Blitz Bowl, as you might expect, the aim of the game is to score touchdowns. But scoring more touchdowns than your opponent is not necessarily going to win you the game. The game has a new to Blood Bowl mechanic called “Challenges”. This is similar to objectives from Warhammer Underworlds: Shadespire.

Each turn (after the first), three Challenge cards are placed face up. If a player fulfills the conditions of any of the cards, they gain a bonus score. Not only that, they get to keep the card. On the back of each card, there is something called a “bonus play”; a one-shot special move to help give advantage later in the game. If you can make all three in a turn you get 2 extra bonus points. I really like this mechanic and can’t wait to try it out.

Games Workshop clearly has plans for Blitz Bowl beyond this box. There are player cards for both Human and Orcs as you would expect, but also included are cards for Elves, Dwarves, Skaven, and Goblins. I think the plan is to bring out mini packs of Blitz Bowl teams further down the line, but in the meantime, those with the corresponding Blood Bowl teams can get stuck straight in.

What is Space Marine: Adventures?

Subtitled Labyrinth of the Necrons, it’s a cooperative adventure game for 1-4 players. It’s possibly most remarkable for the 5 freshly sculpted Space Marine figures it contains. These come from 5 different Space Marine chapters and are each in a different colored plastic. (If that weren’t exciting enough, the game comes with 5 similarly colored dice too.) The sculpts are of the highest quality and very dynamic.

There are no other miniatures included in this box. The Necrons are represented by cardboard tokens. The game consists of some modular board tokens and several sealed decks. Labyrinth of the Necrons has several levels of difficulty. There are three quest levels, each more difficult to than the last. These can even be strung together to form an epic campaign for true legends of the Imperium. Further difficulty can be added through extra “advanced labyrinth” cards, and then Challenge Cards which much like Blitz Bowl above, add extra missions that players must complete on their way to clearing out the Necron infested maze.

What is the Quest to Mount Doom?

Perhaps surprisingly this isn’t a cooperative game. Players are represented by members of the Fellowship who, for reasons that are not entirely clear, are competing to get the One Ring to Mount Doom first. This game comes with a large board, festooned with locations from Middle Earth. This game is very much a film tie-in rather than with the book, with all the locations and characters being represented by stills of the film. That said, the board does have a fabulous Middle Earth map watermark.

In the game players will travel to various locations from the films, searching for the One Ring, whilst finding other items on the way. The game has a hidden item mechanism, where, the person who has the Ring is kept secret until such time as the Eye of Sauron falls on them. This is the most boardgame-like of the three releases, yet still has a sprue of Citadel Miniatures. This one in gold, featuring all of the Fellowship and perhaps best of all, a Ring! Quest to Mount Doom is for two to five players, though in the advanced rules section there are suggestions of how to play with more, even with a full Fellowship, if you dare!

I’m excited for all three of these releases, with each one bringing something different to the table. Look out for full reviews and playthroughs in the coming weeks. 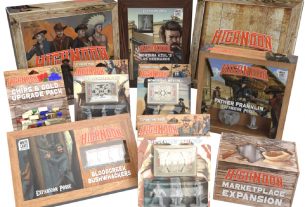