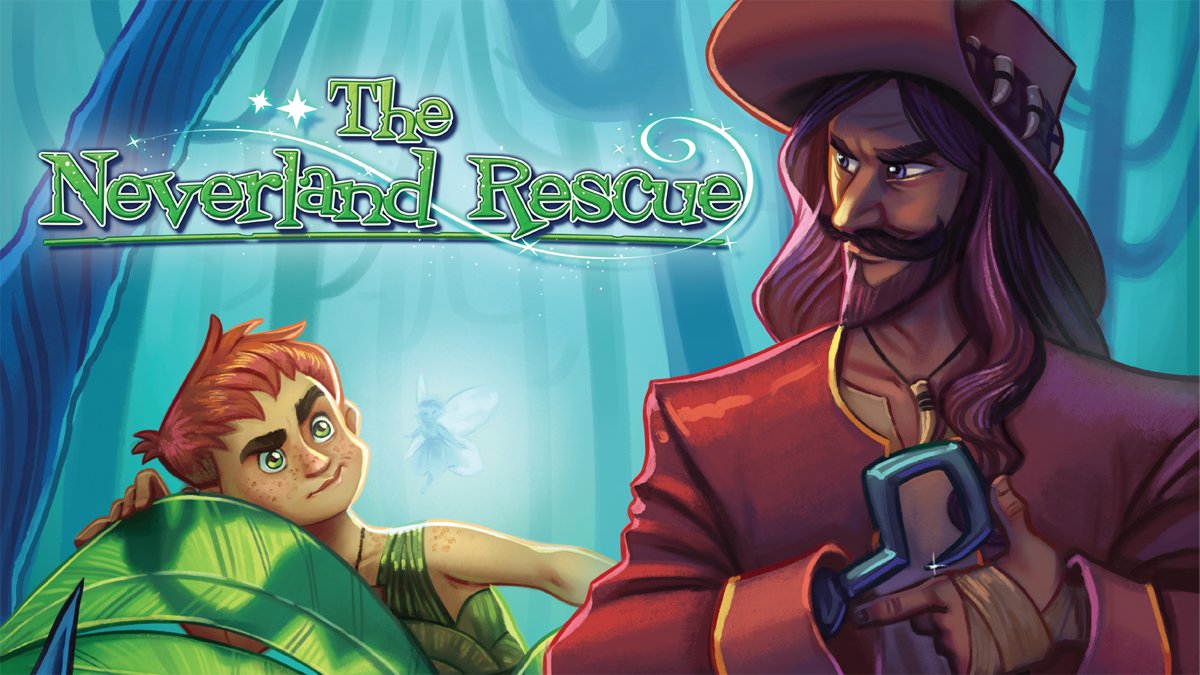 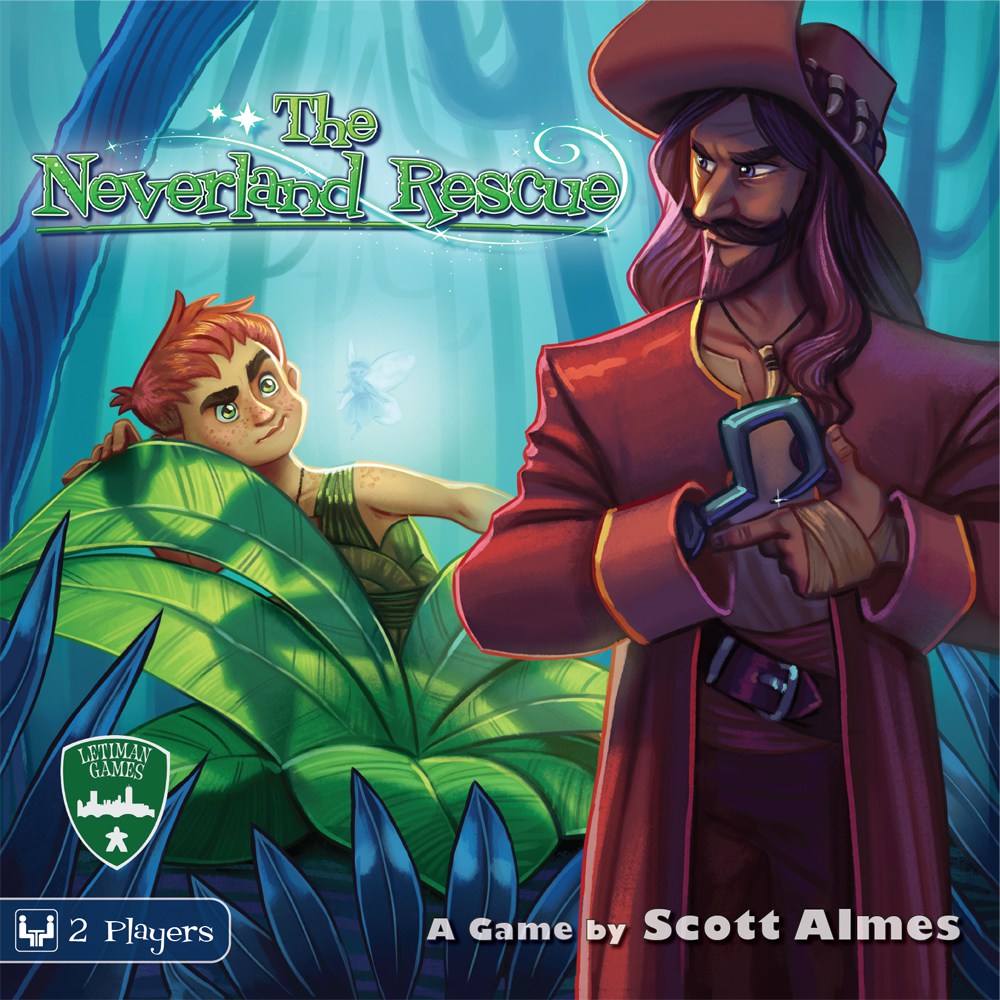 Captain Hook is searching for Peter Pan’s hideouts, while Peter tries to rescue his kidnapped friends. Do you believe in fairies?

What Is The Neverland Rescue?

The Neverland Rescue is an asymmetric game for 2 players, ages 12 and up, and takes about 30-45 minutes to play. It’s currently seeking funding on Kickstarter, with a pledge level of $25 for a copy of the game, or $30 for a deluxe version that includes a box sleeve and printed card sleeves. The game’s Peter Pan theme is fine for kids, the deduction required to play as Captain Hook is a little trickier, but younger kids could play the Peter Pan role.

Although the component quality of the prototype is not final, much of the artwork is already complete, and the game looks fantastic. Jacqui Davis (who has illustrated many other games, from Ex Libris to Storm Hollow to Viticulture) created a colorful Neverland, with ten different hideouts for Peter Pan and a cast of characters. The icons on the hideouts will be larger in the final version so that they’re easier to see.

Davis has put her own spin on the characters: while Peter Pan and Captain Hook still stick pretty closely to their traditional likenesses, Tinkerbell is a bright blue with big hoop earrings, and the Darling kids are brown-skinned. I’ll admit I was a little surprised when I first saw them, but I like the way they turned out.

The Neverland board is beautiful, though I felt it was larger than necessary. The top half of the compass is the belief track, which would be fine as a straight line but curves across the top (with some nice fairy dust to illustrate the power of belief); the bottom half is an illustration of the three locations where Peter Pan and Hook will visit each round—but you don’t actually need that much space to make three columns. It’s lovely but, in my opinion, somewhat superfluous.

How to Play The Neverland Rescue

The Neverland Rescue is asymmetric, so Captain Hook and Peter Pan each have their own set of rules, and different goals.

Captain Hook wins if he can guess all five of Peter Pan’s hideouts, and Peter Pan wins if he can rescue five of the friends on his secret goal card. Also, if either player pulls the belief track to their end of the track, they win the game.

The Hook player should take the Captain Hook standee and two other pirate standees, placing them in the plastic stands, as well as a player reference card.

The Peter Pan player takes their 5 standees (Peter Pan, Tinkerbell, Wendy, John, and Michael), and randomly draws 1 goal card and 5 hideout tiles. The hideout tiles should be placed in plastic stands so that they’re facing Peter Pan, and Captain Hook can only see the backs. Place one standee with each hideout. Peter Pan also takes the three location cards and a player reference card.

Shuffle the Neverland cards and set the deck nearby, along with all the clue tokens.

Captain Hook draws 6 Neverland cards, and places two cards face-up in each of the locations below the board: Neverwood, Marooner’s Rock, and the Jolly Roger.

If Peter Pan and Captain Hook have selected the same location, then Hook has caught Peter (or whatever character was sent to the location). Peter takes and resolves one card, then Hook takes and resolves the other card. Then, that character is exhausted: it is returned to the box, and then Peter must give Hook a clue about that character’s hideout. Hook may use his pirate’s special ability only when both players have chosen the same location.

Action cards will either have an immediate effect, or will go into the player’s hand. The top half of the card shows what the card will do for Peter Pan, and the bottom half shows what it will do for Captain Hook. Hand cards may be played at any time.

Rescue cards are placed face-up in front of the player who claimed them. They show some of Peter’s friends at the top—they might be mermaids, lost boys, fairies, or wild. Peter will need to claim 5 cards of the type matching his secret goal; cards that don’t match count as half a card. On the bottom of each rescue card are clues to the hideouts, which will provide information to Captain Hook.

Finally, after cards have been taken and resolved, Hook may guess one hideout by name. Each hideout has two different icons on it, and the player reference card has a list of all ten hideouts along with their icons. If Hook is right, the hideout tile is revealed, and if there’s a character there, it is exhausted. If Hook is wrong, Neverland gains 2 belief.

The game ends immediately if the belief track reaches either end, or if Captain Hook guesses the last hideout, or if Peter Pan rescues enough friends to reach his goal.

Why You Should Play The Neverland Rescue

Fair warning: I was already somewhat predisposed to like The Neverland Rescue. I’ve enjoyed Jacqui Davis’ artwork in other games, and I’ve also written about many of Scott Almes’ game designs over the years. I’m also always curious about games that are billed as “asymmetric” because I’m interested in games in which the two players actually have different rules, not just the same overall rules but with different player powers. The Neverland Rescue definitely fits the bill there, because Captain Hook and Peter Pan have totally different sets of rules.

One thing I found about the asymmetry here is that the two roles don’t just have different rules, but I think they carry a different mental load. Captain Hook’s role involves more planning and deduction; he’s the one who has to divvy up the cards and try to set the bait so that he can catch Peter Pan at a location. Hook also has to use clues to figure out what symbols are shown on Peter’s hideouts. Peter Pan’s role seems a little simpler; he needs to rescue his friends, and avoid getting caught by Hook. That said, there is a little more that Peter needs to consider when making his decisions, but it does seem that Hook generally spends more time in thought than Peter.

What that means for parents is that this can be a cool game to play with your kids. My 11-year-old doesn’t really like deduction games (despite my attempts) because she often doesn’t have the patience to use the process of elimination to narrow down choices. She has no interest whatsoever in playing as Captain Hook. But she was happy to play as Peter Pan, and let me do the deduction work while she tried to sneak in and rescue the friends.

The core mechanic is the classic “I cut, you choose”—though in this case Hook is rewarded if he can predict Peter’s choice. There are a couple strategies available: do you make one of the locations clearly better than the others to draw Peter there, or is that too obvious? Or do you make all of the locations roughly equally desirable, so that Peter won’t get too much no matter where he goes… but then it’s harder to predict where he might show up? Again, my daughter always prefers to be on the “choose” side of “I cut, you choose,” and she liked the fact that in this game, Hook is always the one who “cuts.” In most games of this type, players will take turns cutting and choosing, so this is a surprising exception.

Of course, on the flipside, it means that if you have two players of equal experience, the Peter Pan role might feel a little too light—that player will spend a bit of time waiting for Hook to make their decisions, both in how to distribute their cards and in working out clues to decide which hideout to raid. It’s not a very long game, but it can feel like one player did most of the heavy lifting, and might not be as satisfying if both players are looking for the same level of puzzle-solving and strategy.

That’s not to say Peter Pan doesn’t have some thinking to do. Peter’s character abilities can only be used if he doesn’t get caught (except for John, whose ability is to switch locations if caught), so it’s definitely important to figure out where Hook is going to go. But in making that decision and deciding the relative values of the cards, you also have to pay attention to what information the various rescue cards will give Hook. For instance, in one game I played, I got a card that had three hideouts listed—and it turned out that none of them were active hideouts. That let me eliminate three hideouts right away, which meant I only needed to eliminate two more to pin down Peter Pan.

Peter gets to activate abilities generally when he doesn’t get caught, and Hook gets to use abilities only when he catches Pan, so that puts even more weight on both players’ decisions about where to go. Peter needs to be particularly careful when using special abilities, because each ally can only be used once in the game, and will also give a clue to Hook when the ability is used. Hook can use his pirate abilities again and again, but in each game he only has access to three of the five (including Hook himself). Knowing which ally or pirate to send to the location can be an important strategic choice for both players.

I also like the belief track tug-of-war, which provides a second victory condition for both players. There are action cards that will cause Neverland to gain or lose belief, and there are also character abilities that can affect the belief track as well. Since Neverland gains 2 belief whenever Hook guesses a hideout incorrectly, Hook needs to be careful managing the belief track unless he’s absolutely sure about his guesses. At the same time, if Peter is focused on rescuing friends and lets Hook get away with the “lose belief” action cards, he could lose even though Hook didn’t find any of his hideouts.

There’s some luck involved for sure. I had one game in which I caught Peter Pan very quickly. In the first round, I got an action card that let me draw off the top of the deck, and it happened to be a rescue card with three hideouts—all three of which were current hideouts. There wasn’t really anything Peter could do at that point to hide that information, and because it was a random draw from the deck, he didn’t even know it was coming in order to take the card before I could.

There are some parts of The Neverland Rescue that felt a little bit fiddly; one of my friends felt like there were too many different action cards and would have preferred a narrower selection. (For instance, the aforementioned “take a card from the deck” card.) It can also feel like there’s a lot going on whenever Peter’s allies are exhausted, because you have to remember to give Hook clues even when you’ve chosen to use their abilities. 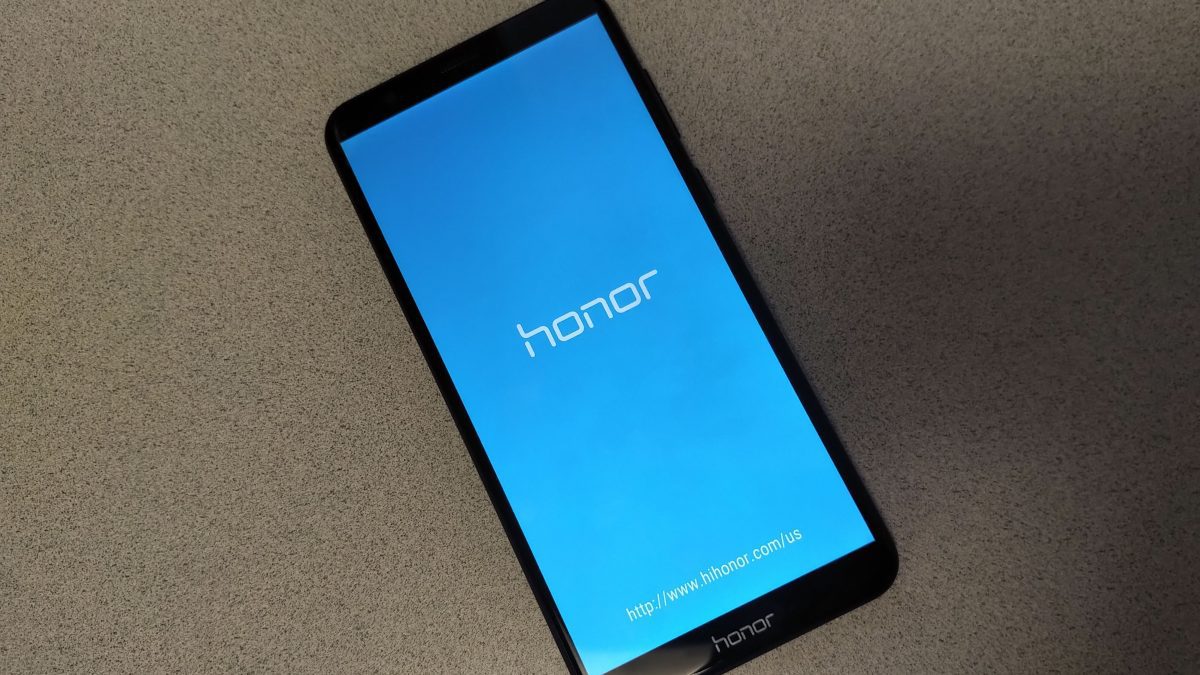 Review: The Honor 7x Phone Is No Exception to Huawei’s Excellence 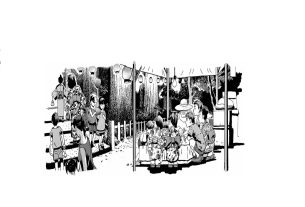