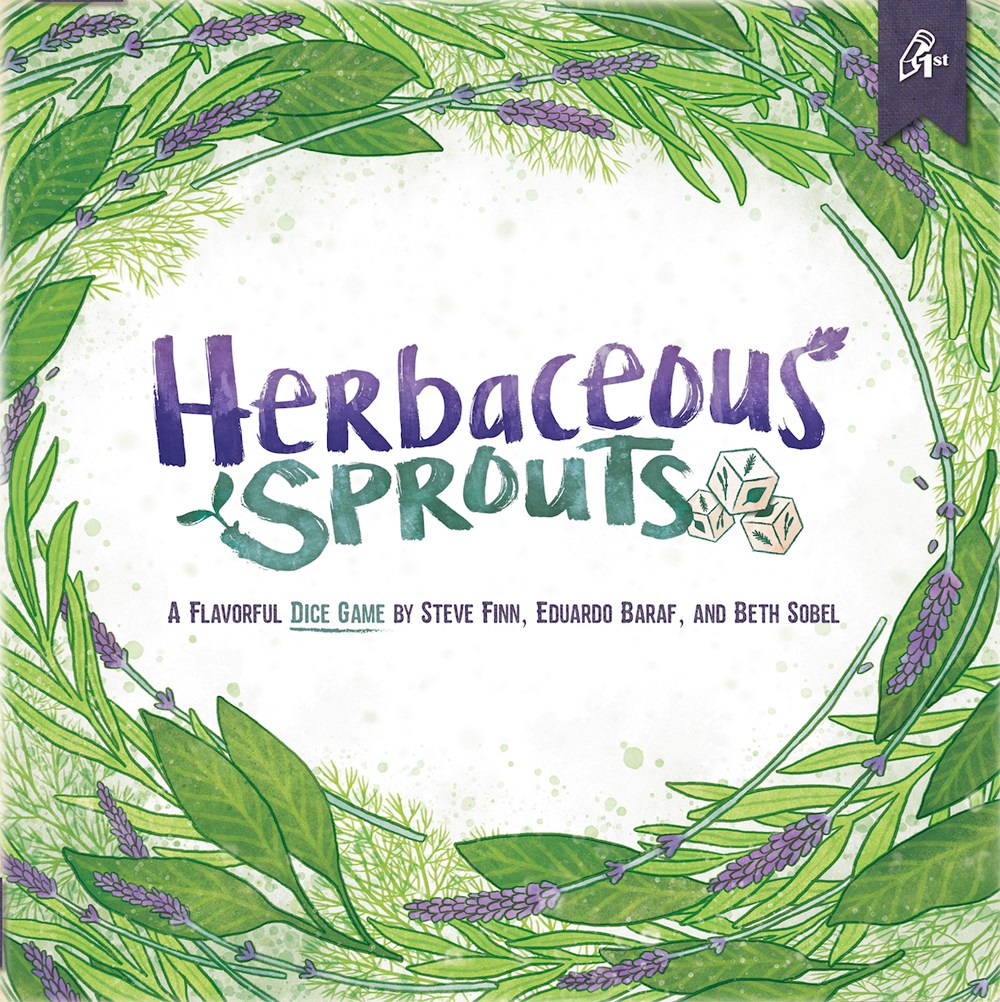 It’s time to plant herbs again! But this time, we’re all planting in a community garden, and competition is fierce for the best planting spots. Things are getting a little dicey…

What Is Herbaceous Sprouts?

Herbaceous Sprouts is a new dice-based spin on Herbaceous for 1 to 4 players, ages 8 and up, and takes about 30 minutes to play. It’s currently seeking funding on Kickstarter, with a pledge level of $35 for a copy of the game. The game is appropriate for both adults and kids—the rules are fairly light and the theme is family-friendly.

Note: My review is based on a prototype copy, so it is subject to change and may not reflect final component quality. The board will not have the dark blue borders on the sides, for instance, and there are some component upgrades that will potentially be added as stretch goals.

The game features artwork by Beth Sobel, and the herbs may look familiar to you if you’ve played the original Herbaceous card game. This time around, there are also three types of flowers, a community garden game board, and a refreshing glass of lemonade. It’s a lovely looking game, like its predecessor. The sprout tokens for the players have different colors and sprout shapes, which is great for color blind players.

The dice in the prototype are just stickered, but the plan is to have screen-printed dice with rounded corners, similar to those in Star Wars: Destiny. There will be four different colored dice; each one has all five of the herbs, plus a special face: a flower, a wild herb, a glove, or a trowel.

The board itself is divided into four sections. Three of them require different sets of herbs: all identical herbs, all different herbs, or different pairs of herbs. The fourth section is for planting the three types of flowers.

How to Play Herbaceous Sprouts

The goal of the game is to score the most points by planting your sprouts in the community garden.

Place the game board in the center of the table, with the lemonade card next to it. Shuffle the tool cards; depending on the number of players, you will remove a number of cards from the deck.

Each player takes a player card (with the picture of the wheelbarrow), the sprouts of their color, and two random dice from the bag. Roll the dice and place them in your wheelbarrow.

Players will take turns being the Lead Gardener, who takes the first turn during the round. Each round, the Lead Gardener will first prepare the tool shed: draw cards equal to the number of players plus one and place them face-up next to the board. Most cards have spaces on them for dice—draw dice from the bag, roll them, and place them on the cards.

Then, in turn order, each player will take a tool card, use tools, and then plant seeds.

When you take a card, you also take all of the seed dice on the card and place them into your wheelbarrow. If you have more than 7 dice, you must discard down, returning extra dice to the bag.

Then, you may use the tools shown on your card, plus tools on your dice. The player cards list the different effects of tool cards:

In addition to the tool cards, some dice have tools also. The yellow dice have trowels, which are used just like the trowel card. The red dice have gloves, which let you re-roll the glove and any number of dice in your wheelbarrow. Then, discard your tool card (unless it has a pot on it). Tool cards may not be saved to use later.

After using your tools, you may plant in any number of gardens by discarding seed dice from your wheelbarrow and placing your sprouts on the corresponding locations. Flowers may only be planted using tools, but the herbs are planted simply by having the correct combination. The white sign on the garden spots shows what you need to plant there, and the green circle is the point value for planting in that space.

If you are the first player to plant at least one sprout in each of the four garden areas, you take the Lemonade card, which is worth 2 extra points.

Finally, once every player has had a turn, you clean up: discard any dice on the remaining tool card, and discard that tool card. In a 2- or 3-player game, you also look at the little banner at the bottom of the remaining card, and place a rival sprout token on the corresponding space, if it’s free. (In a 4-player game, you only use the rival sprouts in the advanced game.)

Then, Lead Gardener passes to the next player clockwise, and another round begins.

The game ends after all of the cards in the deck are used up. Add up all of your points in the garden, plus the Lemonade card. You also score points for dice left in your wheelbarrow and unused pots on cards: 1 point per flower, 2 points for each set of 3 different herbs, and 1 point for each pair of the same herb. (Note that each die and card may only be included in one scoring set.)

The solo rules were designed by Keith Matejka (Roll Player).

You will alternate between being Master Gardener and Assistant Gardener, flipping over the gardener card each time.

On the Master Gardener turn, you draw one extra die from the bag and add it to your wheelbarrow, and then take your turn as usual, selecting one of the three available cards. The rival will then plant sprouts corresponding to both of the remaining cards. The cards are then discarded and refilled.

On the Assistant Gardener turn, you flip over a rival card, which will indicate which of the three tool cards the rival will “choose.” The rival discards that card, and plants a sprout according to the banner on that card. You keep the rival card as a pot, and then take your turn as usual. The last tool card is discarded without effect.

At the end of the game, add up your score and compare it to the rival’s. You must beat the rival’s score to win, and your rank is determined by how many points you get more than the rival.

For Kickstarter backers, there’s also a mini-expansion included. During setup, you will remove 3 cards at random from the deck, and shuffle in 3 of the Green Thumb cards. These cards are worth points at the end of the game, and the higher valued cards will require you to discard dice from your wheelbarrow (if any).

Why You Should Play Herbaceous Sprouts

I really enjoyed the Herbaceous card game, enough to give it our GeekDad Approved seal. The artwork is lovely, the game is simple and quick to learn and play, and the theme is refreshing. Herbaceous Sprouts retains the charm of the original, but with dice. Let’s be honest: that right there may make or break the game for you. Those who love dice games will be thrilled with this new take on it, and those who can’t stand dice games probably won’t care for it. I think I prefer the dice game just a little, but the card game is less expensive and more compact, so it travels really well.

The similarities (aside from the theme) are that, when planting herbs, you need to collect particular sets in order to plant them: all identical, all different, and different pairs. You also have to decide between planting as soon as you’ve collected a valid set, or waiting to try to build a bigger set for more points. One key difference, though, is that in Herbaceous other players may take the herbs themselves before you’re able to plant them, while in Herbaceous Sprouts nobody can take your herbs but they can take your planting spot. If you’re trying to get that coveted 6-of-a-kind spot, you might lose your chance to plant in the 5-of-a-kind space if the dice don’t work out as planned.

I like the different dice, and the way that you can use various tools to manipulate dice, so that it’s not all luck-based. Also, because the dice are drafted from the tool shed, you can see what other players have and what they’ll be able to take, which informs your decisions. If you’re playing with the rival sprouts, it can become particularly important to consider which card will be left at the end. If you’re late in the turn order, you might be able to let the rival take a slot that you see an opponent working toward.

The lemonade bonus is only worth 2 points, but I’ve had a few games come down to a 1-point difference, so the lemonade matters. The trick, though, is that if you’re planting in all four garden areas, chances are you haven’t planted as many herbs at a time, so you’re getting fewer points per herb. It’s a tough balance, racing for the lemonade but still managing to get to some of the higher-scoring spots before they’re gone.

I had to ship the prototype off to the next reviewer, but I was able to play Herbaceous Sprouts several times (and taught it a few more times) with a wide range of players, and I can attest that it works well with both young and old players. It’s definitely more of a casual game and not heavy strategy, but there are enough meaningful decisions to keep it engaging for most players—and it’s a short enough game that even if you’re bored you probably won’t mind playing it. Just about everyone I played it with enjoyed it.

I think Pencil First Games has another winner on its hands with Herbaceous Sprouts. If you enjoy dice games and you like the gardening theme, it’s worth a closer look. For more information or to make a pledge, visit the Herbaceous Sprouts Kickstarter page!