Ray: James Robinson’s run on Trinity so far has essentially been everything his Wonder Woman run isn’t – compelling, with a strong focus on its core characters and exploring a fascinating mythology. When we last left off, the Trinity was stuck in Skartaris, battling against a horde of Deimos’ monsters as they worked their way towards the castle of the now-late Warlord. Diana is still blind, and the battle has taken a toll on them as their journey spans decades until they find themselves in front of Jennifer, the Warlock’s daughter. As they explain to an oddly combative Steve Trevor who doesn’t seem to really trust any of their stories, Jennifer then cast a spell to fix Diana’s vision, restore their youth, and grant Superman a limited immunity to magic. They were then sent back into battle against a much bigger army, that seemed to destroy anything in its path – until an unexpected ally joined the fray.

I had a feeling Travis Morgan couldn’t actually be dead because his off-panel death was just too anticlimactic and he died in the last series of the character by Mike Grell. Still, his dramatic return is a great moment in the issue, and the fight against the army of monsters is one of the issue’s best scenes. I like how well this series uses the Warlord supporting cast as well. The ending seemed a little anticlimactic, as the heroes describe how after the battle was won, Jennifer created a portal and sent them home – but the story isn’t over. Steve’s behavior continues to be overly aggressive, as he seems obsessed with finding out how to create a portal to Skartaris and get back there to investigate. That’s because he’s not Steve Trevor at all – he’s Deimos, and the final act of this series will take the heroes back to Skartaris to rescue the real deal. This series as a whole has lacked direction, but this final arc is probably its best moment. Makes me want to go re-read some Warlord comics.

Corrina: I have no idea what’s gone wrong in Wonder Woman but Robinson shows he’s still capable of crafting a good story with his work on Trinity. For an arc filled with Earth’s greatest heroes, it’s Jennifer who shines the most, restoring heroic powers, and pulling her last move so Travis can enter with the cavalry (so to speak) and save the day.

But what made this issue more interesting than a side trip to Skartaris is the ending, with the presence of Deimos revealed in our world. Nice twist and here’s hoping Robinson can stick the landing. 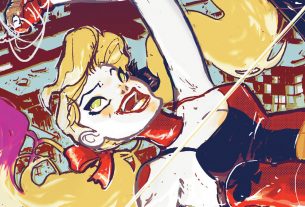