Ray: It’s a double dose of Mairghread Scott’s Batgirl to kick off the run, and this double-sized annual calls back to one of the most painful moments of Barbara Gordon’s life – no, not that one. This issue brings back Batgirl’s most personal arch-nemesis – her little brother James Jr. The twisted young serial killer was one of Scott Snyder’s signature villains, and since then he’s tormented Barbara in Gail Simone’s run and had a brief stint on the Suicide Squad. Missing an eye since his last encounter with Barbara, he’s now safely locked up in Blackgate – or is he? A series of killings have begun happening around Gotham, or at least they look like killings. The truth is a lot more complicated, and the exact style of wounds around the victims reminds Barbara of the horror movie that she and James obsessively watched as kids. That brings Barbara to the secure glass cell where James is kept in the basement, as the two of them begin a twisted cat and mouse game that’s been going on since they were kids. Scott wisely keeps James subtle and manipulative, like a classic serial killer rather than a supervillain.

I don’t know if Scott has any background in crime fiction, but if not she’s doing an amazing job right out of the gate. James is a genuinely chilling serial killer type, and much of the issue centers around the common problem of copycat serial killers and serial killer groupies. It seems James has gotten himself quite a fanbase in prison – I imagine if a 19-year-old master killer who got away with his crimes for years actually existed, he would probably attract some as well. Barbara’s top suspects for the new killings are these groupies, and that leads her on a mission to track them down. One is a tragic abuse victim who has internalized the abuse, while the other is a shockingly functional woman who has carefully compartmentalized her obsession. But while she thinks she has James’ number, Barbara has underestimated her evil kin once again, with a great twist ending to wrap the issue. This is a fascinating tale about dark, codependent relationships and the way that while Barbara will keep on foiling James, she’ll never quite be able to rid herself of him. Two for two this week for this new run. 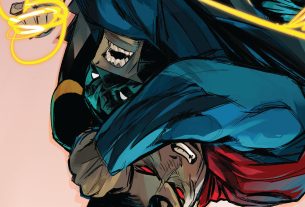