Thus, in Injustice 2 #21, we don’t get any updates about Conner Kent’s return to the living, or any fallout from the death of Tim Drake and General Zod. But we do pick up on several interesting subplots, including a segment that is probably the best thing Tom Taylor’s ever written for DC Comics. The focus of the first segment is on training, as Kara Zor-El continues her journey to being a warrior with the Amazons and Black Adam, while Damian encourages her to spread her wings and finally leave Khandaq. Meanwhile, Booster Gold tries to train Jaime Reyes – with mixed results – but is interrupted by a lawyer with a final message from Ted Kord. I won’t spoil too much about this segment, but suffice it to say it’s one of the best Blue and Gold scenes ever written.

The second segment takes Damian back to the Amazon where Ra’s Al Ghul holds court and begins to set up a redemption arc for the rogue Robin. What does it say about the state of the DCU when the Damian from the dystopian hellverse may be more likable and decent than the one currently appearing in the DCU? The murder of an innocent small town by Amazo has been one step too far for him, and he consults with potential allies, including Vixen and Animal Man, before trying to confront his grandfather. The Amazon sanctuary is a weird place, as a bizarre interaction between Killer Croc and Orca makes very clear, but it’s also a dangerous one, as Ra’s holds an uneasy alliance with Gorilla City – one that begins to unravel this issue, as Gorilla Grodd moves to stage a coup against King Solovar. There’s a lot going on here, but the series is at its best when it’s letting its characters stand out, and the first half of this issue epitomizes its best. 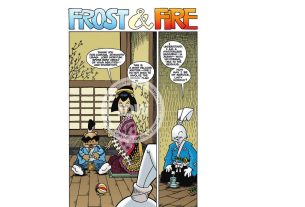