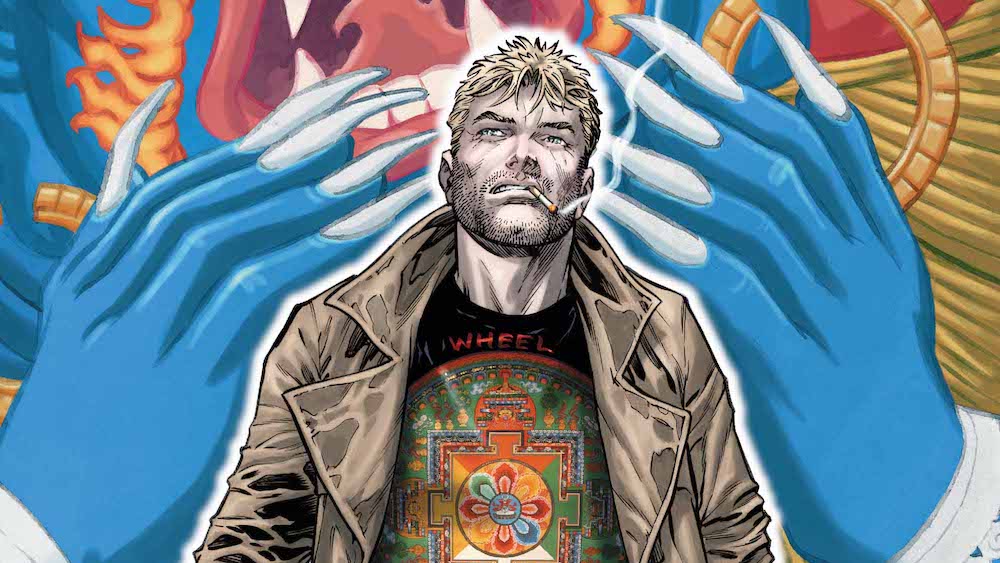 Corrina: Finally, John Has to Prove He’s Not Lying

Ray: Richard Kadrey is a mystery novelist and former Vertigo writer, and has never written for a mainstream DC book before this arc, I believe. That’s very evident when you read this issue, which feels like a slow-burn mystery that takes its time unraveling the secrets of the forces chasing Constantine. Unfortunately, that also means it’s frustratingly slow for most of the issue, with the story dominated by people standing around talking. The issue opens with Constantine captured by a gang of mages who suspect him of the murder of his two friends from last issue. Their leader, Jackie Stone, while deeply suspicious of him, does give him the chance to prove himself, through a series of elaborate tests and truth serums that give away that he’s not the culprit here. It’s good to see a woman of color in a position of leadership like this, of course, but Stone often feels like a bit of a cliche with no real character beyond “tough”.

At the same time, the villains of the series – a pair of ruthless magical hitmen – are keeping an eye on Constantine, plotting behind the scenes how to undermine and discredit him. Unfortunately, their plans are…less than imposing. They manipulate a junkie with promise of magical healing into attempting to shoot Constantine and Jackie, but he’s quickly disarmed by Jackie and nothing much comes of it. They continue investigating the deaths, but are eventually ambushed by the villains who shoot Jackie and frame Constantine. Overall, it’s a very low-drama issue, reminiscent of the twelve-issue Spurrier run that kicked off this book. However, this doesn’t really have anything as compelling as the Djinns that dominated that run. Seeley is back on the book after this arc, and it feels like his over-the-top horror is better suited to this book.

Corrina: There is a great deal going on in this arc: the gang of mages, the magical hitmen, and the mystery behind masterminds. As Ray said, it’s a slow burn but I enjoyed it more than he did, as the plot is building something elaborate that I expect to pay off at the end of this arc.

I was also thrilled to have someone test Constantine thoroughly before believing anything he said. Too often, we’ve seen people say “well, I know he’s not trustworthy but he’s right about this.” Jackie, however, has a means of getting at the truth and attacks the problem of the murder of her friends directly, more with Constantine in tow rather than working with him. I could do with a little less of John pointing out how not-trusthworthy he is and how he’s not a hero, however.

It’s holding my attention, though the climax is obviously going to make or break this arc.