Corrina: Buy This For the Art

Ray: After a weird first two arcs, first dealing with Batman’s messed-up mental state and then with the bizarre new villain of the Arkham Knight, Detective Comics #1006 delivers the best issue yet of Tomasi’s run with a back-to-basics story teaming Batman up with another Gotham Detective – of sorts, given that the Spectre may have been a policeman when he was Jim Corrigan, but now he’s something much bigger and darker. Regular artist Brad Walker takes a break for this arc and indie artist Kyle Hotz steps on to give this arc a much darker tone. Hotz is very reminiscent of Kelley Jones, but a bit less stylized with more realistic character figures. That makes him perfect for this horror-accented arc and things start off nice and grim when Jim Corrigan and his older police partner are lured into an ambush by a band of creepy Spectre cultists who kill the partner and manage to kidnap Corrigan – separating him from the Spectre and sending the Spirit of Vengeance off on his own mission.

After brutally dispatching the cultists who didn’t get away, the unmoored Spectre sets out to track down Batman in the most bizarre part of the issue. Transforming himself into a 300-foot tall version of himself, he tromps through Gotham until Batman chases him down – but apparently, Batman is the only one who can see him. That’s a frequent feature this issue – Spectre can bend the laws of time and space, which makes him a very different player from what Batman is used to teaming up with. They also don’t exactly get along, especially once Batman discovers the gruesome remnants of the Spectre’s rampage against the cultists. Batman is always out of his element against magic, but here this story is a typical Batman case file in all ways except the supernatural twist. This really feels like what this title should be – Batman solving weird, short mystery-based stories with guest-stars. Lots of unanswered questions, but a fun start.

Corrina: The art in Detective Comics #1006 will jump out at everyone who reads it. There is a resemblance to Kelley Jones but there’s also a throwback feel to Hotz’s work that reminded me of some of the early Golden Age Batman stories, and a little bit of the classic Batman art of Marshall Rogers as well. (Rogers is my personal favorite Batman artist.) I want more of Hotz’s art in my Batman stories.

I also always like it when Gotham gets creepy. I mourned when Gotham By Midnight was inevitably canceled. That series kept us guessing about the Spectre and Corrigan’s true natures and, similarly, there are no easy answers in this issue. But the addition of Spectre groupies (is that the right word for them?) ups the creepy factor, and shows that the Spectre is not infallible or all-knowing. 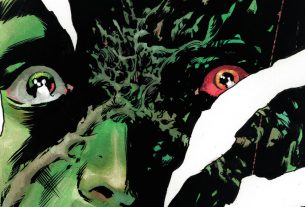