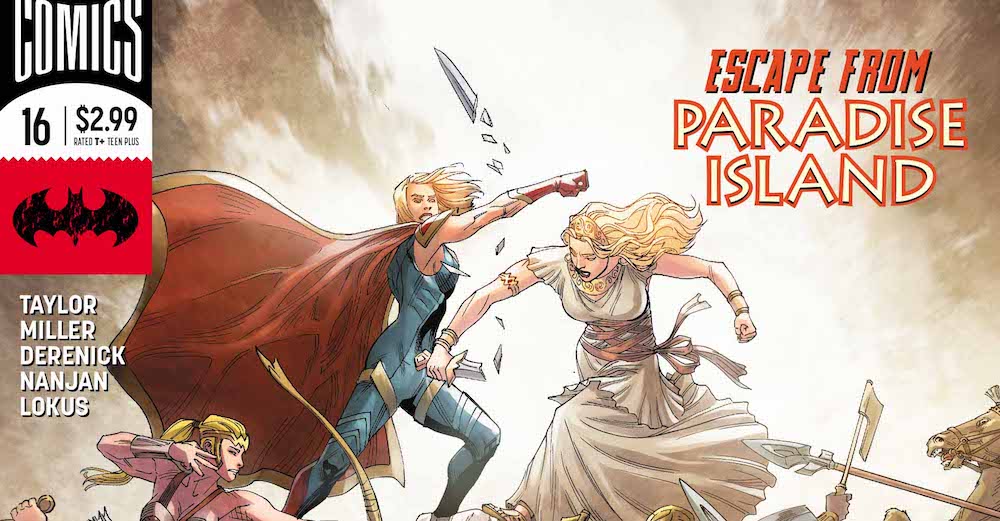 This is one of those issues where the digital-first format makes the title feel more like an anthology, with the story drastically switching gears midway through and creating a briefly jarring effect. The first segment picks up right from last issue’s Themysrica story, as Kara infiltrates the island and gets involved with a band of rebel Amazons trying to free Wonder Woman. Although Wonder Woman’s bonds are enchanted, Kara is able to break them without much of a problem. This segment disappoints, because of Nubia – the new Wonder Woman, who seemed like an interesting new figure to add to the heroic resurgence in the universe – tends out to be nothing more than a bit player, who leads the loyalists to Hippolyta and then gets beaten up and stripped of her weapons. Kara gets to pull off some impressive feats of strength, but this segment is full of wasted potential.

The second segment, focusing on Barry Allen, is much more intriguing. Barry was a loyalist to Superman for the longest time, despite being horrified by his increasingly brutal leadership. By the time he decided to switch sides and help the resistance, it was too late to regain their trust. Now he’s free, but forbidden to use his powers and monitored 24-7 by Batman. The segment shows him pushing against the limits of his punishment when it’s needed to save lives, and taking a long lonely walk to his destination – the home of the young Australian hero who was left disabled after standing up to Superman early in the first series. This segment does a great job of reminding us that the Flash was always a hero, and giving an emotional coda to one of the most memorable stories of the first volume. Now this is Taylor doing his best work on this franchise.