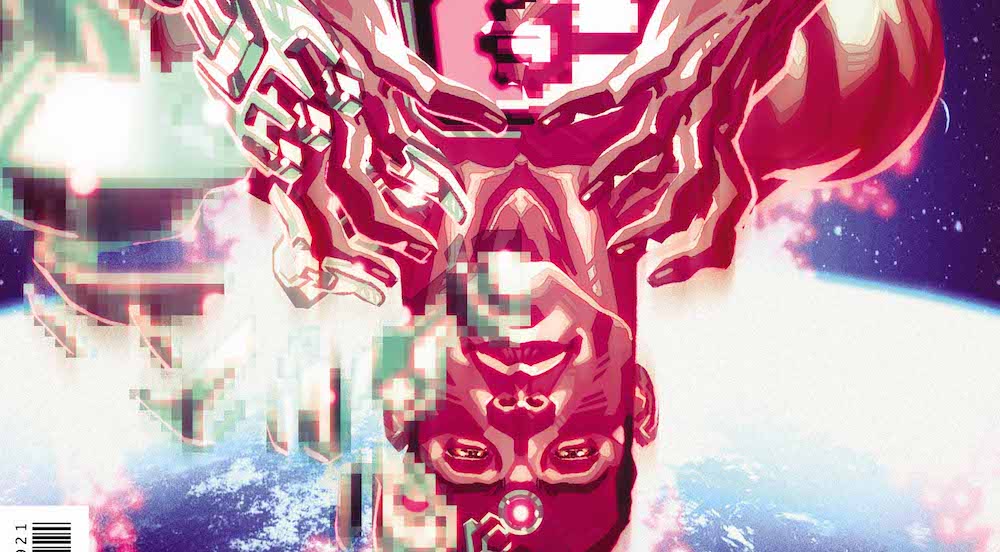 Ray: We now know that this is a dead series walking, ending the same month as Superwoman as one of the first two to wrap (not counting All-Star Batman). John Semper Jr. wrapped his extended arc last month, so Kevin Grevioux (the creator of the Blue Marvel over at the competition) steps in for a two-issue fill-in arc. It’s a much more down-to-earth, less technical arc than Semper’s style, which is a double-edged sword – it’s more coherent, but also less exciting. The issue takes Cyborg to Sudan, where he’s dealing with meteor strikes, local poacher militias, and child soldiers. In the middle of all this, he finds an odd old man who hands him a hollow rhino’s horn. The old man turns out to be a djinn, who can grant three wishes. Cyborg is skeptical of this, but it doesn’t stop him from wishing to be human again – which promptly happens.

That’s part of the big problem with this story – every issue about Cyborg seems to come down to whether he’s really human, or the fact that he misses being human and just wants to be normal. The fact that he was involuntarily transformed is a huge part of his character, but it feels like it defines him too much.

Think back to the multiple runs we got on Birds of Prey, and consider how many of them revolved around the fact that Oracle couldn’t walk. Very few. It was involved when it was relevant, but it was just part of her character, not her whole story. Grevioux does subvert expectations a bit here in that Cyborg doesn’t get the chance to enjoy his newly restored humanity – it makes him weaker and vulnerable to disease as he and Sarah battle against a ruthless militia leader and try to protect the kids he’s abducted. The issue is tense and exciting in places, but it’s not much more than that.

Corrina: Grevioux has a story to tell but it has so many elements that it comes across as a bit jumbled. There’s the djinn’s magic and his horn, there are the local poacher militias, there is Vic’s frustration with his non-humanity and the change of setting.

I love the concepts here and bringing an African-American hero to deal with the issues in Africa (mostly created by colonialism) has great promise. Adding in Cyborg’s unique capabilities is a terrific idea, especially since the problems they encounter cannot always be fixed by force.

But the djinn’s magic muddles that theme. He doesn’t seem to go with the rest of the story and Vic’s frustration with his machine part of himself seems out of place, given where the last arc left him emotionally. Cyborg is not all about his disability and yet this entire series has been about his fight with the machines that make up much of his body (and perhaps mind.)  New readers might be all right with this focus but if you’ve been reading this series regularly, it will be frustrating to see the same character arc yet again, except this time with magic as a temptation. Plus, Vic himself seems out of character, wanting to rush into the camp without any sort of a plan.

The art does render the setting nicely and I especially like the visual version of Sarah in the field. This issue looks crisp and clear.

But I wish all the plot elements complimented each other, instead of adding to the confusion.